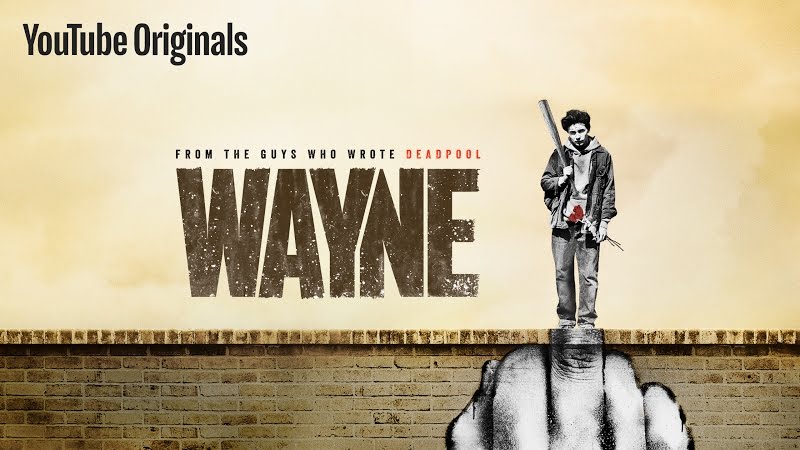 Created by Shawn Simmons, Wayne is a new web series, which premiered January 16 on YouTube Premium. This streaming subscription service (formerly YouTube Red, but rebranded YouTube Premium as of May of last year), started offering exclusive original content about two years ago in an effort to compete with sites like Netflix and Hulu, and has been quietly stepping up its game.

By the end of 2018, YouTube Premium’s resume already included a slew of original films and series, spanning from drama to comedy, and even documentaries. But it was in the summer of that same year that an impacting statement in quality entertainment was made: eyebrows suddenly rose when, on June 6, original series Impulse was made available to subscribers.

There was a palpable shift in terms of standards. Impulse was the science fiction saga of a teenage girl, living with her single mother, and struggling to cope with her newfound and involuntary superpower: the ability to teleport. To that, add sexual assault, high school drama, adolescent confusion, and small town petty politics – and what plays out is a dark but soberly written drama. The show was populated with solid complex characters, weaved into a plot which, but for the visually enthralling Superhero antics, tastefully retained the realistic intensity of drama at its best.

In that same summer, a month later, YouTube Premium put out Sideswiped, a competent romantic comedy series that movingly chronicled the lives of three women clumsily navigating love and romance in the age of Tinder. And later in the year, in November, the platform premiered Origin, a Sci-Fi series about a group of strangers stranded in deep space aboard a spacecraft headed to a new planet. Action-packed, with a sophisticated production value and addictive doses of mystery and suspense, the high level of entertainment made up for a few somewhat glaring plot holes.

As a subscriber, who had only signed up for the original bundle service (Google Play’s music catalog and the advertising–free streaming of YouTube videos), I found myself consuming this original content, and pleasantly surprised by its increasing quality. Most of their earlier series were not that good, but it seemed YouTube was finally starting to hit its stride. Heads were starting to turn.

Since last September an official teaser trailer for Wayne had been circulating on YouTube. Another trailer was posted around November. I never noticed them until December. But when I did, the online buzz was evident in the comments section. People were anxious to see it, and understandably so. Never mind that the first trailer had announced that this was “from the guys who wrote Deadpool.” On their own, those trailers’ visual language, the bordering-on-cartoonish violence, playing out to the sound of aggressive punk-rock guitar music, promised a gritty tale of a renegade misfit (Wayne) hell-bent on righting wrongs in white trash suburbia.

Finally, January 16 came, and Wayne did not disappoint. Labeled an action comedy, the show takes place in Brockton, Massachusetts, where Wayne, a truant and mutinous 16 year-old, lives an aimless life, juggling taking care of his cancer-ridden father with getting in over-the-top violent fights. But, in the first episode, two things happen that will set in motion a road trip of epic proportions: one, he meets Del, a sharp-tongued 15 year-old who becomes his girlfriend, and two, his father, his only close family, passes away. However, before passing away, his father tells him about a 1978 Pontiac Trans Am that was stolen from him when Wayne was five. When his father dies, Wayne burns down his house with his dead father still in it, and sets out to take the Pontiac back. He invites Del to ride with him to Florida on his motorbike in order to retrieve his father’s car. She accepts the challenge against the wishes of her father, who, along with the police, will pursue them on their cross-country tour.

What ensues is an action saga that channels Quentin Tarantino’s gore and antics (Wayne’s absurd heroics), punctuated by really funny surreal comedy, against the backdrop of a plausibly intense love story. And although Wayne’s bravado may be wildly unreasonable, it stems from the moral compass of a genuinely courageous soul. Everything goes against him, but his heart remains pure. Del is repeatedly confronted with his clumsy savagery, only to have it repeatedly washed away by his noble selflessness. Throughout the story we come to find out that Wayne’s crush on Del is old, but we get to witness Del slowly fall in love with him.

So Wayne is as much a story about a rugged, flawed hero, as it is a story about the beginnings of a love trying to survive a world stacked up against it. Wayne and Del are part youths learning to walk, and part outlaws navigating the novelty of genuine love. We’re left with no choice but to root for them. The whole cast is amazing, but the chemistry between the actors who play Wayne (Mark McKenna) and Del (Ciara Bravo) is seamless and gripping from the start. They both bring a purity to their characters that turns them into diamonds that go unnoticed to everyone else around them. McKenna’s unique brand of subdued acting paints Wayne with a stoicism that contrasts harmoniously with Bravo’s vivacious and no-nonsense Del. The male-female archetypal dynamic is masterfully captured here in an adolescent microcosm – in house: he’s blissfully overpowered by her wits, but outwardly: he physically shields her from harm.

Season 1 has 10 episodes. At the end of episode 10, as Wayne and Del escape from yet another melee, with Wayne badly hurt and Del at the wheel of his father’s Pontiac, Del is mustering up the courage to finally confess her love for him. And before she lets her words out, Wayne interrupts her, mumbling “I love you, Del” for the very first time. Seconds later, Del’s father crashes into them, takes her, still unconscious, away with him, and leaves Wayne to die by the side of the road.

With wittily written dialogue, often served in delightfully crude Boston accents, and chock-full of ludicrous characters, Wayne is tragically hilarious at times. It is indeed an action comedy, but it works on a higher level because it is an outrageous story about rebellion and love. Well done, YouTube. From all accounts, Wayne hasn’t been officially renewed yet for a second season. But I hope they come back, because, even though I have no idea where those two are going, I want to go on the ride with them.