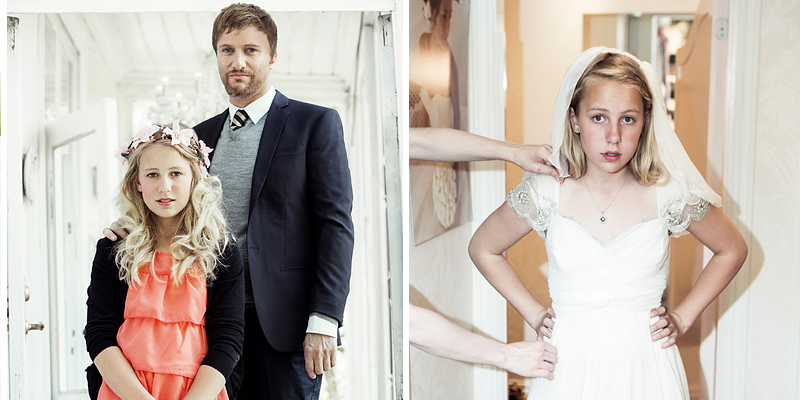 Earlier this year, a blog called Theas Bryllupsblogg (“Thea’s Wedding Blog”) sparked a major controversy in Norway. The blog detailed the upcoming nuptials of a young girl named Thea—who, according to the blog, was a mere 12 years old. A lover of horses and the band OneDirection as many 12-years-old girls are, the preteen was preparing for marriage to 37-years-old Geir in a match arranged by her parents. Entries featured photos of Thea trying on wedding dresses, her annoyance with the energy that it took to plan a wedding, and her fear of having sex with her new husband. One entry detailed an argument that the young girl had with her mother in which the latter told the former to “grow up” because she was going to have a “family of [her] own” soon.

Many Norway citizens who saw the blog contacted authorities in an attempt to the stop the wedding, which was to take place on October the 11th of this year. The hashtag #stoppbryllupet (“stop the wedding”) began treading on Twitter the week before the wedding. Then, on the big day, a video of the wedding was posted on Thea’s blog, which showed Thea in a big, white bridal gown walking down the aisle to meet her decades-older groom at the altar. When the time came for the young girl to say “I do,” though, she denied the vow with a simple, “No.” The wedding, it turned out, was nothing more than a viral campaign conceived by Plan Norway, a branch of anti-child marriage organization Plan International, to raise awareness of child marriages that are performed every day in both developed and undeveloped nations.

Said Plan Norway director Olaf Thommessen concerning the campaign: “We want[ed] to show how horrible the practice of child marriage is and put it in a context that is familiar and normally associated with love, happiness and hope for the future. Many girls dream about their wedding day and this day is often referred to as one of the happiest days of their lives. But for 39,000 young girls who get married every day, their wedding day is the worst day of their life.”

Helena Bergström, mother of Maja Bergström, the actress commissioned to play Thea, later recalled the photo shoot for the “dress shopping” blog entry and how it hurt her to even imagine her daughter getting married at such a young age. “It was horrible to see her like that. My heart was broken when I saw my little girl in this big wedding dress,” she said, “but I was so happy that I didn’t really have to give her away like other mums do. I was relieved that this was not my reality.”

She added that Maja was excited to participate in a project that could potentially help so many young girls who are forced into marriage as children.

According to Plan Norway, 142 million girls will be forced into arranged marriages with older men within the next decade—most before they’ve reached age 18. Girls who suffer this fate often lose access to schooling, face health problems that arise from giving birth at such a young age, and find themselves with fewer opportunities open to them down the road where opportunities are crucial.