Niantic Labs’ new Field Trip app, now available for Android, is a pop-up location-based guide to interesting things all round you. This augmented reality guide would allow you to walk down an unfamiliar street, and to immediately access and know what others already know about that street. You’d choose whether that information is a hole-in-the-wall dumpling shop with the best scallion pancakes in town or whether it’s the etymology of the street’s name or whether a dramatic movie scene was filmed across the street.

Currently, users can get information from feeds like “Historic Places and Events,” “Food, Drinks, and Fun,” and “Cool and Unique”, and more, with more feeds coming up. I imagine that feeds for Movie Set Locations and for Fictional Events would do well too. So far, there is no one called Intrusive Advertising. But it’s a free app, so is an ad-supported version, like the embedded feeds in  M.T. Anderson’s amazing dystopian novel Feed, really a stretch?

The default setting in the Field Trip app is “Feeling Lucky”, in case you forgot that Niantic Labs is part of Google. This promised “occasional notifications”, but there’s a lot more happening in, say, Manhattan than Missouri. (Sorry, Missouri.)  A walk around my Brooklyn neighborhood turns up historical notes, and an artist’s studio and gallery in a brownstone basement. Field Trip promises to allow users to control their info by selecting which feeds to follow, and the frequency of these updates, and to learn from the user’s preferences when he votes a piece thumbs up or down.Users can also turn off notifications, and just open the app to browse for interesting things. This would be a cool way to use Field Trip while waiting for a bus or train.

Field Trip’s users can hear notifications instead of reading them. The app promises to discover when users are driving, based on their movement speed, and switch to audio automatically to prevent drivers from looking at their handsets. 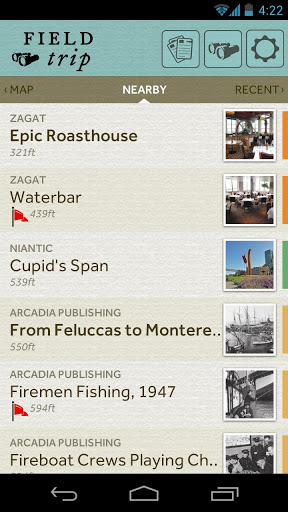 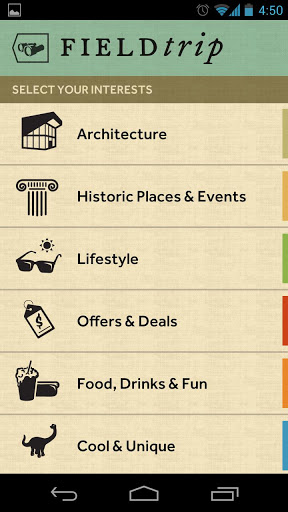 The present version of Field Trip is a cool local-interest app, a fun way to find out historical trivia about a city, but it also points to ambient intelligent in an augmented reality future. Google has been playing with ambient intelligence with projects like Project Glass and the AR game Ingress.

Ambient intelligence refers to a system of networked personal electronics, environmental electronics and information systems, that are constantly improving their personalization and learning to be more adaptive, learning and reacting to how users use them. Check out this paper from researchers at Washington State and the University of Ulster (long but thought-provoking) or get the basics from the Wikipedia entry.

Ambient intelligence uses surrounding technology to anticipate the user’s needs and desires, and present them with solutions. Field Trip uses a voting system, like the way Pandora learns your musical tastes, to customize and improve location-based offerings. Given enough time and data, this could grow into a system that alerts you to a nearby diner with your favorite sandwich, or a great band playing in a local bar. Taken to a futuristic utopia, ambient intelligence will eventually be a coffee-maker that turns itself on when I need a fresh cup.

It’s exciting to think about a pocket app that learns about what you like and finds it for you, and, on a larger scale, about omnipresent technology learning from our choices, and predicting our needs. Still, there’s plenty of fodder for a dark sci-fi future in which privacy is over and Big Data tricks mindless consumers into buying more and more mass-produced junk. As everyone who’s used the musical taste-discovery Pandora knows, the program learns from upvoting and downvoting songs, but it also has an uncanny ability to whip out one’s guilty pleasure songs at inopportune moment. It’s probably not self-aware and doing it on purpose, bent on phase one of destroying all humans, is it?