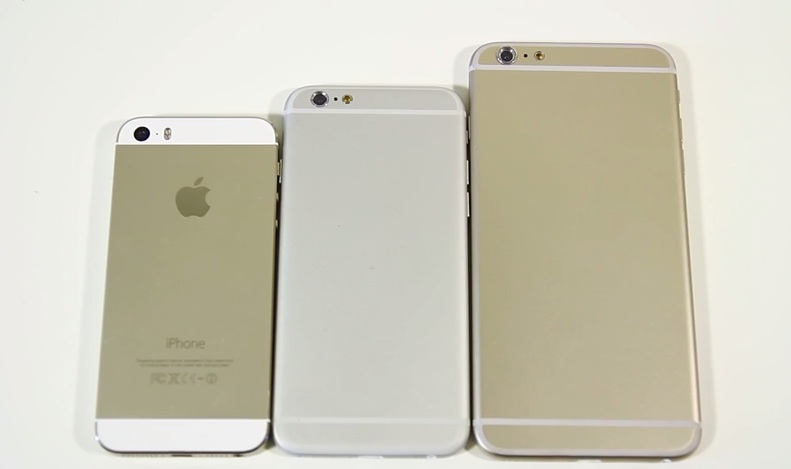 Fans of Apple hardware are eagerly awaiting the announcement of the next iteration of the iPhone. The rumor mill is always abuzz leading up to the announcement, and this year is no different. One of the most requested design changes (an increase in screen size), is almost a guarantee this year. The new iPhone is reported to be coming in two different sizes this year; 4.7 inch and 5.5 inch. The question is which one do you spring for, if you are in the market for a new phone?

Big screen sizes are nothing new, you can ask anyone who isn’t sporting an iOS device, but Apple is well known to only adopt technology once the kinks have been worked out. The iPhone’s form factor has remained steady, with screen sizes ranging from 3.5 inches, or the latest models sporting 4 inch screens. This form factor made one handed operation relatively easy, which was great several years ago. Today, consumers prefer the larger screen size, and the added benefits that come with it. A larger screen size normally gives you a bigger chassis, and more room to work with for internals, like a bigger battery. So as long as the resolution bump isn’t dramatic, it should come with slightly better battery life. A larger screen size is also simply a joy to consume media with.

Are there any significant differences between the 4.7 inch version, and the 5.5 inch? We really won’t know for sure until the devices are announced, but rumors (for what it’s worth) say yes. One of the rumored differences comes in terms of storage capacity. The iPads have always enjoyed a roomier capacity, maxing out at 128 GB. The 5.5 inch model is said to add this additional capacity to iPhones. Whether it is true or not remains to be seen, but given Apple’s propensity to exclude expandable storage on their devices, it would be a welcomed addition. The 5.5 inch model is also rumored to come with optical image stabilization (OIS), which is another plus for the larger handset.

A big deciding factor for many users will undoubtedly be which is more comfortable to hold. The 4.7 inch model will be a sweet spot for many users in this regard. To be fair, I’ve played with an LG G3, and have not had any difficulties handling that particular 5.5 inch handset. How easily the phone will fit in your pocket is another concern, but again, I’ve had no issues in this regard.

Gym rats might prefer the 4.7 inch device. Particularly if they like strapping their device to armbands. 5.5 inches because a bit unwieldy with physical activity. Then again, that might not matter if an iWatch is around the corner, but that’s a topic for another time.

Rumors state that the larger iPhone model will be delayed, and that the 4.7 inch model will hit the market first. This was initially thought to be an issue with production materials, but the latest word, is that apple is trying to prevent one device from cannibalizing the sales of the other. Similar to what happened when the iPhone 5C launched in parallel with the iPhone 5S. So if you want the larger handset, you might have to wait a little bit longer after the devices are introduced.

In the end you have to choose the device that is best for you.  The benefits of a 5.5 inch device outweigh the svelte design of the 4.7 inch handset to me. The recent news that iPad sales are on a decline, could possibly suggest that more consumers are willing to wait to have that additional screen real estate on their phones.  That isn’t the case for everyone though, and only time will tell which screen size will be more popular with the masses.