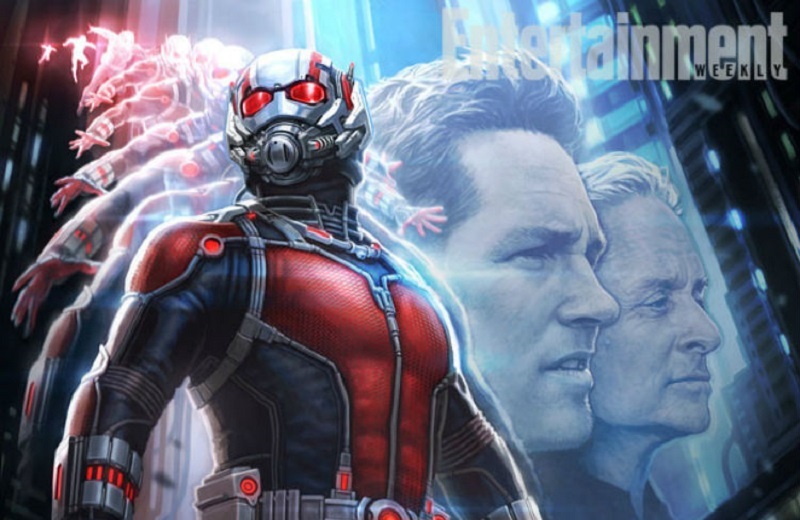 San Diego Comic-Con has begun, officially, and the news is already pouring out. Marvel fans in particular got a great little sneak peek last night at the poster art for the first ever Ant-Man movie title. We already knew that Paul Rudd is locked in as Ant-Man himself, and that Marvel has scooted slowly away from Hank Pym in favor of Scott Lang for the titular heroic character, but now we have some early artwork to show us what the movie might feel like. Marvel makes its full presentation on Saturday, but revealed the poster art as part of the very first day of comic-con.

Nothing about the art is particularly news for Marvel fans. We knew the direction of the story. In fact, when Ant-Man’s solo film was announced, some fans were a bit nervous about Pym’s character getting his own film—in the comics his relationship with Wasp is less than squeaky clean; he physically abuses his wife on more than one occasion and has a serious alcohol problem. Now that Pym, played by Michael Douglas, has been moved to the background of the story in favor of Lang, there’s a collective exhale of relief from the fandom. Spoilers below, so tread carefully.

In the comics, Scott Lang steals Pym’s technology to indulge a nasty habit of kleptomania. However, the movie will emphasize the work that Lang winds up doing for the greater good once he’s obtained the technology behind Pym’s work. The script casts Lang in a much more positive light—making Pym into Lang’s mentor and shifting Lang’s goals to defending the technology and helping save the world.

The ant-man technology is used to change the suit-wearers size. As the wearer shrinks in size, their strength increases. The inspiration for this dual change was derived from the relative size and strength of ants themselves, who can carry much more than their body weight and create remarkable hives underground. While neither wearer of the Ant-Man suit is particularly admirable, it’s become a theme in most of the new Marvel movies that even our superheroes aren’t perfect, so it makes sense that Lang will be redeemed over the course of his first film.

Marvel has a lot more announcing to do this Saturday. Last year, their panel was crashed by Tom Hiddleston himself who appeared in a full Loki costume and blew the minds of everyone on site. Perhaps this year there will be an equally massive surprise, perhaps not—either way Marvel is off to a good start with this movie poster. Other announcements may include movie titles to go along with the release dates we heard about earlier this week, or details on MCU phase two. Or maybe Tom Hiddleston had too much fun last year, and he’ll crash the con again. Honestly, it’s Comic-Con. If history is any indicator, anything can happen.

Writing began on Ant-Man back in 2006. Since then several script treatments have been abandoned, and director Edgar Wright left the project in 2011. This was the largest setback as Marvel President Kevin Feige originally stated that Ant-Man was only getting the green light because of Wright’s involvement. Wright was one of the first artists announced for the Ant-Man movie, which was supposed to be filmed in England, where Wright currently resides. However, the film is moving forward even without its captain, and principle photography is set to begin next month in Georgia. Ant-Man will release world-wide on July 17th, 2015, as the first film in the third phase of the Marvel Cinematic universe. It will release only two months after the Avenger sequel, Age of Ultron, premieres in theatres.