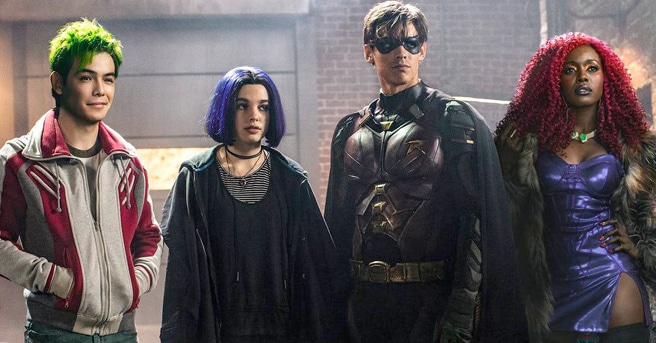 The DC Universe has expanded to a live action version of their famous Teen Titans, whom most people are familiar with from the original cartoon version. The show aired on Netflix early January 2019 after being very hyped up. The live action version has adopted characters from the cartoon version. These characters are Robin, Raven, Starfire, and ‘Gar’ Logan. And the first episode is all about introducing the characters to us and setting the stage for the entire series. Some viewers may feel that the inaugural episode fell short of doing exactly that, but it certainly delivered when it comes to action.

The Show Opens Right Away to a Creepy Circus Scene

We find out that this is just Rachel (Raven) dreaming but the content of the dream is an important plot point and a connection to a later character. She clearly has been struggling with nightmares, and it seems that her sleep issues also affect the other person living her house, her Mother. It’s clear that their small house is fraught with tension and fear, and that there is something very dark inside of Rachel. This is juxtaposed with religious paraphernalia around the house. We get a small glimpse into Rachel’s daily life as a high school student, and it is not a happy one. Things continue on a downward trend for Rachel when she gets home from school where she runs into trouble and our first potential villain. All this trouble eventually leads her to Detective Grayson aka Robin.

We are introduced to the brooding and mysterious Detective Grayson early on. He works as a detective for the Detroit PD and for all intents and purposes, is not one of the friendly guys at the office. When his new partner tries to introduce herself to him, he is not really having it. Another detective explains to her that Grayson has been doing everything he can to avoid getting a partner since he started at the Detroit PD a month ago. This is how we find out that he is a recent transfer from Gotham PD. When Rachel finally crosses his path, he is skeptical of the girl and everything she is saying but he quickly realizes that there is a reason why she has come to him. The two of them are put in a compromising position, which together, they are able to get out of. The last we see of them in this episode is when they drive off together.

Even though most of the first episode is dedicated to Detective Grayson and Rachel, we are introduced to Kory Anders aka Starfire. When we first see her, she is waking up in a crashed car with her driver dead in the seat next to her, all the way in Austria. This quickly escalates into her being pursued by armed men, whom she manages to get away from. It soon becomes clear that Kory has no memory of how she got where she is, or who she is. When she finally makes it to a mirror she is shocked to see the face looking back at her. Using clues from her purse that take her on an adventure of her own, we soon understand that she is on the search for Rachel. The reason why remains unknown.

Gar Lightens Things Up A Bit

Finally, we get a very short and sweet introduction to Garfield ‘Gar’ Logan at the tail end of the episode. While the other three’s main characters introductions were dark and filled with action, this scene is almost a reprieve from the weight of that. Unlike Rachel and even Starfire who do not completely understand their abilities and the extent of them, Gar obviously knows about his shape shifting powers pretty well and uses them to his advantage.

By the end of the first episode it still is not exactly clear where the plot line is going, or even who the real villains are yet. It will be interesting to see how Starfire and Gar finally end up meeting with Raven and Robin. Hopefully the show doesn’t keep replacing plot with action scenes.