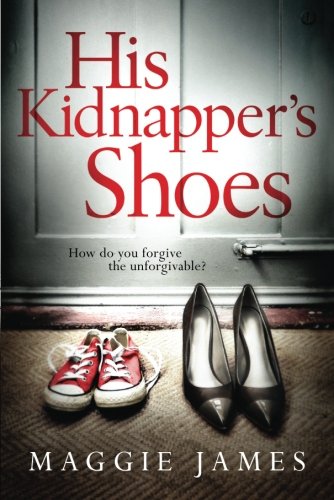 The desire to read His Kidnapper’s Shoes by British novelist Maggie James stemmed from my natural curiosity and interest in psychological novels, a genre James devotes her style of writing to with an equal amount of nail-biting suspense. Sitting with a 4.5 star rating on Amazon, His Kidnapper’s Shoes is a pathological study of character tied up in a troubling story of pain, suffering, and the repairing power of empathy.

Retrospectively tracing the relationship between a mother and son, the novel begins where it ends. Laura Bateman is held in custody and under psychiatric evaluation for kidnapping a 4-year-old boy whom she raised for 22 years and calls her own. Now 26 years old, Laura’s alleged son Daniel develops the courage to act on his suspicions that Laura isn’t his mother – despite being told otherwise – when his girlfriend Katie encourages him to discover the truth behind his earliest childhood memories that exclude Laura. Though the novel is largely centered around Daniel’s self-discovery, James blends in Laura’s unsettling childhood through an intrapersonal narrative that unites each and every character through loss and the ability to move forward. Alternating between Laura and Daniel’s perspective, the reader is guided by breadcrumbs that lead one chapter into the next, successfully generating intrigue and suspense for how and why Daniel became a Bateman.

Although the plot and its repercussions aren’t exactly relatable, the story provokes a list of hypotheticals, “what if” scenarios, and philosophical questions that naturally draw in the reader. Can one justify alleviating one’s own pain at the expense of another person’s suffering? Can we measure suffering? How would you feel if you had suspicions that your mother lied about your birth? Would a different past have changed who you are today? Is it possible to forgive the unforgivable and is forgiveness contingent upon time? — and the list goes on and on.

Overall the novel has generated a positive reader response on Amazon, however I do find myself agreeing with a problem that some reviewers have also taken issue with. Readers have mentioned how the characters are hard to relate to, though I believe it’s James’ writing style that creates distance between the reader and the characters. At times it feels as though characters lose their individual personalities and distinctive voices to consequently blend into one another. Though this stylistic choice could be considered a tool used to unify the characters in suffering and in healing, the writing style can produce the opposite effect on the reader.

In spite of the fact that I wasn’t affected by James’ writing style, I can appreciate a thought-provoking a story that entertains you with the suspense of untangling a hidden past. However, given that the novel requires empathy from the reader in the same way the characters grow to sympathize with one another, I’d have enjoyed the novel a lot more had I felt empathy from the language rather than feeling forced to empathize with the events of the narrative.

I rated His Kidnapper’s Shoes with 3 stars. The e-book is available on Amazon for $1.48, though it’s unlikely that I’d return to it in the future.