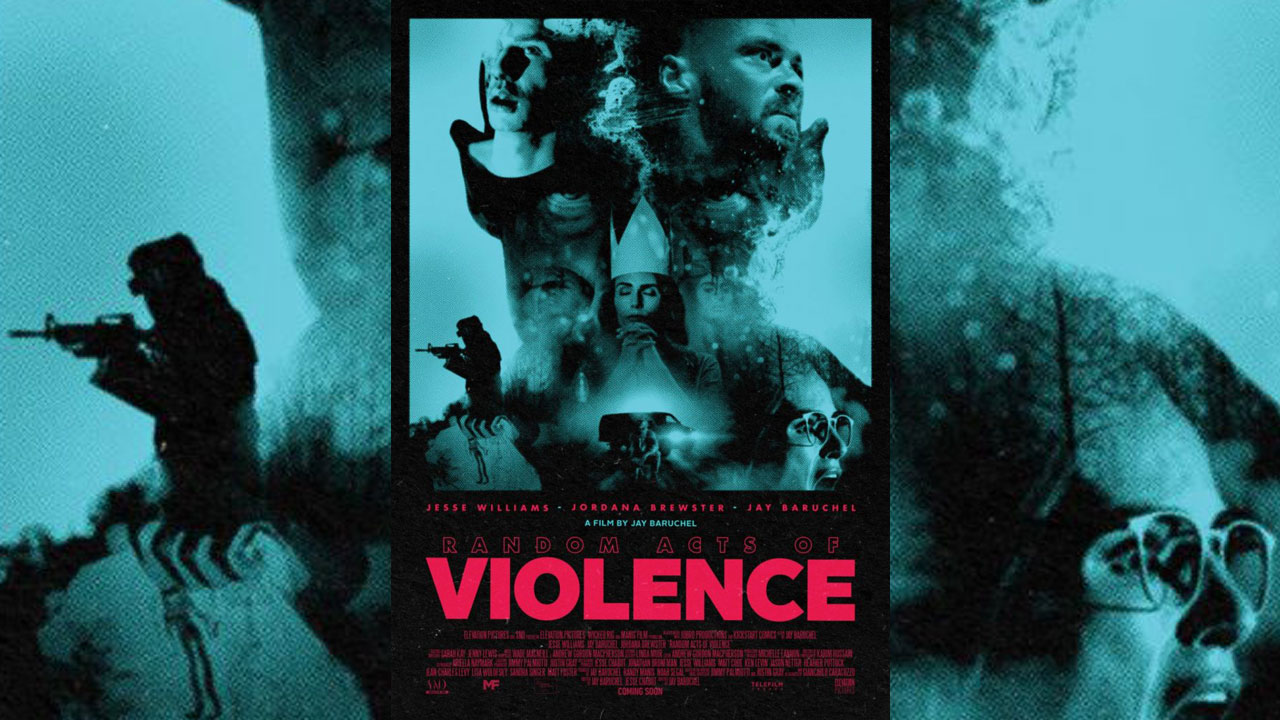 When the trailer for Random Acts of Violence crossed my desk I had tingles up and down my spine, down my arms and legs. Trailers are supposed to do that; they take the best parts and make a compilation of scenes that have the viewer chomping for more. As a huge fan of the horror and thrillers genre, I’ve been an avid reader, writer and consumer of all mediums that transports us into realms of darkness and psychological terror.

The outside world during this “Great Pause” has already been a mind bend but horror fandom invites terrifying things into our home on a regular basis. That’s where Random Acts of Violence enters. Scheduled for release on August 20, 2020 in the US, UK, and Ireland, RAOV premiered at the 2019 Fantastic Fest on September 19, 2019, before Elevation Pictures released the film to the Canadian market on July 31, 2020.

As soon as the screener was available, I logged in to watch and totally judge Random Acts of Kindness. Admittedly, I was waiting to be disappointed. I was convinced that all the good stuff was in the trailer. I was waiting to see if this film was going to be carried by easily recognizable names like Jay Baruchel (the voice of Hiccup from the How to Train Your Dragons franchise), Jordana Brewster (from the Fast & the Furious franchise), and Jesse Williams (from one of my ultimate favorite television series, Grey’s Anatomy).

If I wasn’t impressed, I probably would have taken the press release and spun something nice to say. My preconceived notions and jaded heart was quieted with each passing scene. My notebook and pen were forgotten as I found myself totally immersed in Todd Walkley’s (Williams) world of seeking inspiration for the closing of “SLASHERMAN” – his horror comic book series.

Spending time on the road with his wife, Kathy (Brewster), assistant Aurora (Niamh Wilson) and best friend, Ezra (Baruchel), Todd wants to take an unconventional route of radio shows, cheap motels, and comic book signings to find his muse again. Suddenly, people are being murdered and they look strikingly like the savagery of the SLASHERMAN.

I will not give any spoilers but there is a spot within the trailer that is quite grisly, poetic and beautiful, all wrapped into one gruesome human sculpture…and I loved it.

Jordana Brewster is amazing in RAOV. I’m used to seeing her more glammed up and driving souped up cars in the Fast & the Furious but she gives strength, grit, and empowerment to her character, Kathy. We get to see true-to-life interactions between Kathy and Todd that is rare in film anymore. Long live civil discourse and healthy disagreements! Kathy is not portrayed as a damsel in distress. She is a foundational piece in Todd’s life and career path, but she is in dogged pursuit of her own as well.

I have no doubt that Jay Baruchel and co-writer Jesse Chabot worked tirelessly to give these characters an authentic voice while putting them in extraordinary circumstances. One of the wonderful and likely frightening things that I imagine for public figures is being accessible to their fans. We never know what lurks in the heart and mind of people, especially when they obsess about the scary and terrible things that should only be left to a warped imagination.

Portrayed by Simon Northwood, “THE MAN” is a very imposing figure and scary as hell. There were a few “oh shit” and “no, he’s not going there, is he?” moments that had my adrenaline pumping. I was surprised, thrilled, and enthralled by Random Acts of Violence. The amount of violence and imagery was truly balanced by a compelling story arc that held its own.

Geek Insider had the pleasure of a casual sit down with Random Acts of Violence director, co-writer, producer and actor, Jay Baruchel and the lovely (she’d rather be covered in blood and gore) leading lady, Jordana Brewster on our livestream. No worries if you missed it. We’ve got it right here.

Where to Watch Random Acts of Violence

Starring Jordana Brewster, Jesse Williams, Niamh Wilson and Jay Baruchel, Random Acts of Violence is exclusively available through Shudder and released in the US, UK, and Ireland on August 20, 2020. “Stream Your Fears.”