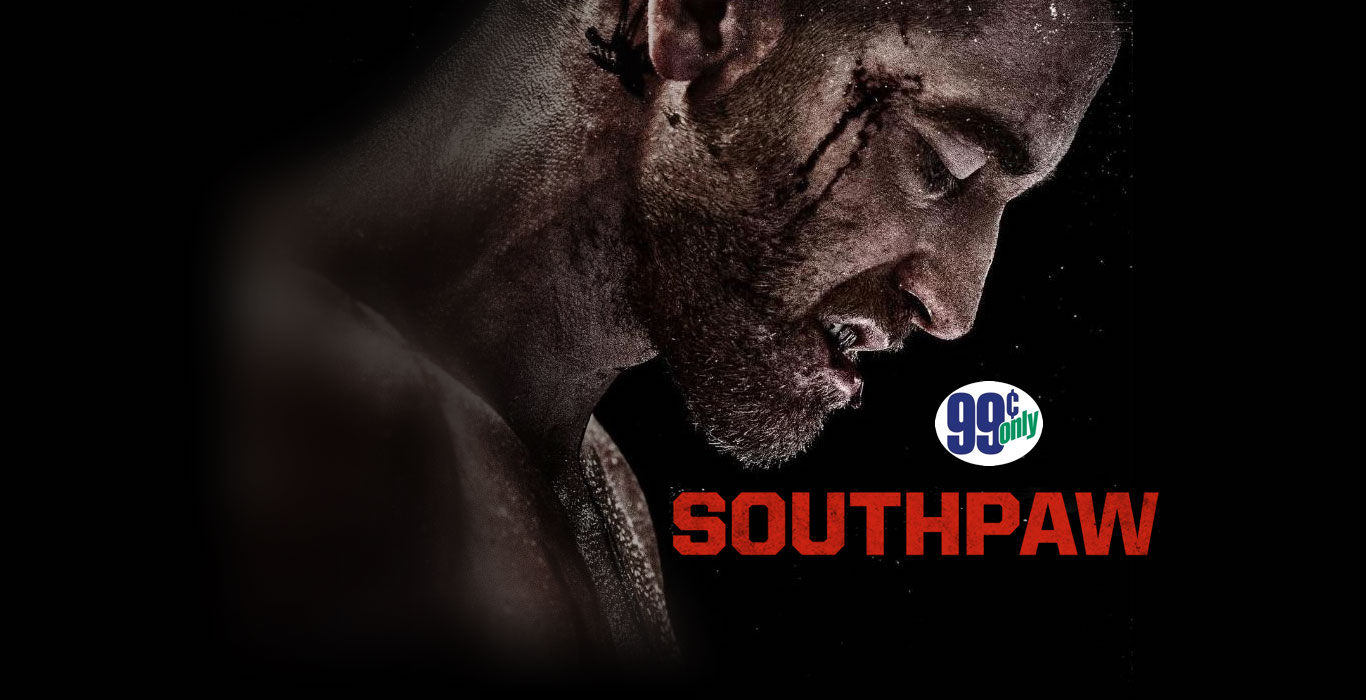 This week a super-buff Jake Gyllenhaal takes to the ring in hope of redemption with, Southpaw. 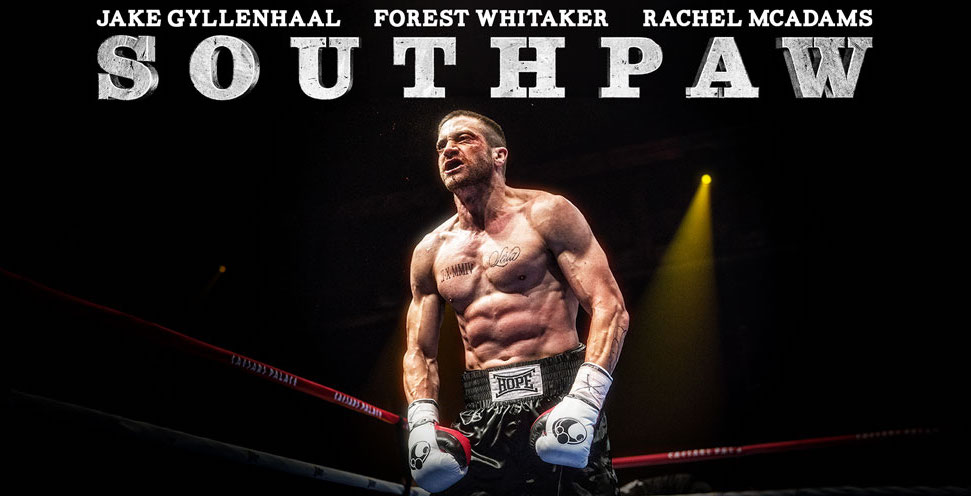 Try Not to Get Hit Too Much

At 43-0, Light-Heavyweight boxer Billy Hope (Gyllenhaal) has never picked a fight he didn’t win. But his brutal, street-brawling style is taking a toll on his aging body and his wife’s steely nerves (Rachel McAdams). As Hope mulls over the idea of taking time off or even retirement, trash-talking number one contender Miguel Escobar is pushing for a shot at the title. When Escobar confronts Hope at a charity event, push comes to shove and an unthinkable tragedy occurs. In the aftermath, Hope falls apart. He loses the fancy cars, the mansion in the suburbs, his title and eventually his will to live. When he hits bottom and loses custody of his young daughter, Leila (Oona Laurence), Hope is down … but he’s not out. Returning to the sweaty, working-class gyms that first fostered his gifts, Hope sets out to make the biggest comeback of his life – inside the ring and out.

Unfortunately, Southpaw misses the mark both in and out of the ring. Building the film around a raw, physically imposing performance from Gyllenhaal, Writer Kurt Sutter and Director Antoine Fuqua fail to match the actor’s energy or find any emotional core for their story. The result is a bombastic bore of a film as cliché as it is emotionally empty. 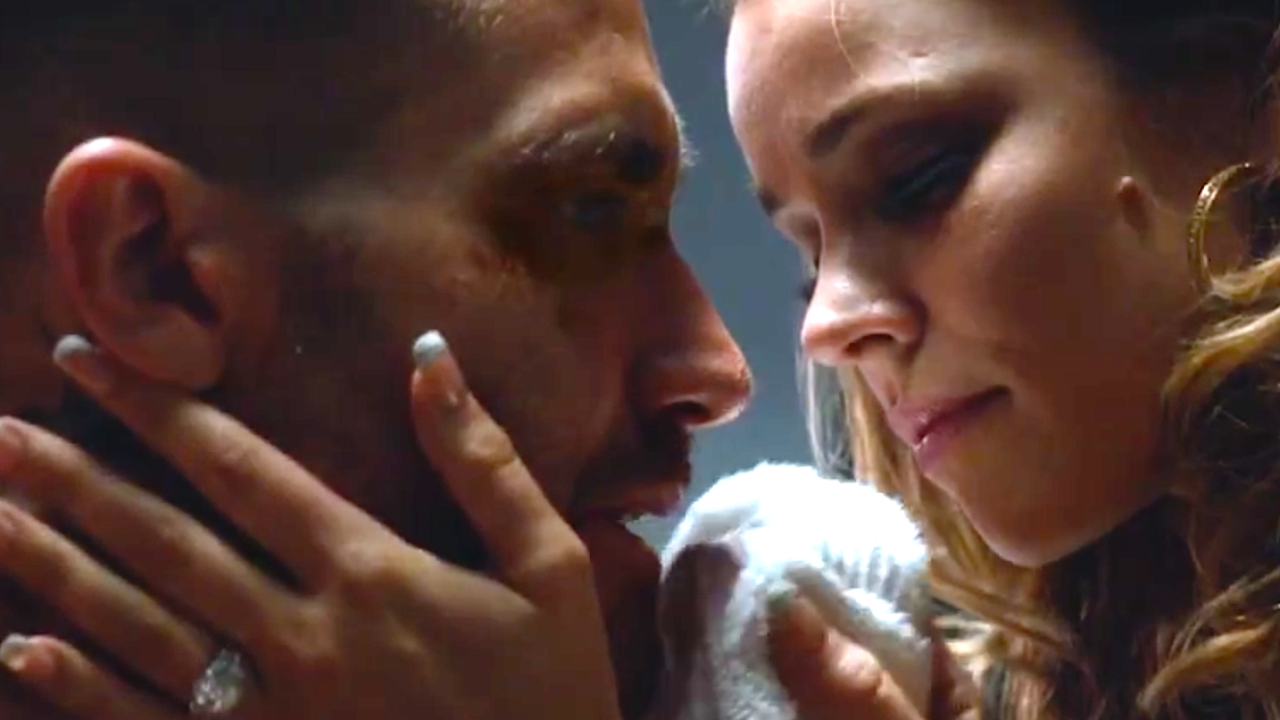 There’s been a minor resurgence in boxing films since Million Dollar Baby scored a knockout in theaters back in 2004. David O. Russell’s The Fighter (2010) and last year’s outstanding Creed stand as high marks for the genre in recent years. When Southpaw hit theaters in 2015, it had specific designs to be held in similarly high regards. Sprung from the mind of Sons of Anarchy creator Kurt Sutter, Southpaw never even comes close. By now, fans of Sutter’s Shakespeare-by-way-of-bikers TV melodrama are used to the scribe’s tough guys being tough aesthetic. But his macho stylings are largely to blame for Southpaw‘s failure.

To Sutter’s credit, the macho vibe works well in Southpaw‘s opening moments. There is a palpable, kinetic energy behind Billy’s locker room rituals that beautifully build toward the brash explosion of energy we see once he hits the ring. Credit Gyllenhaal for bringing that energy in spades. Playing Hope with an over-the-top manic energy, Gyllenhaal sells every drop of blood Billy sheds as he takes a beating that would make Rocky Balboa cringe. But you feel him channeling Billy’s energy into a raging storm. Once unleashed, only wild man Billy remains standing. But therein lies Southpaw‘s biggest problem. While Sutter finds the right side of Billy inside the ring, he never develops the character enough outside of it. Yeah, Billy is a tough guy who can take a beating, but is he a real person? We never find out. As Southpaw‘s tale unfolds stacking tragedy upon tragedy, we never learn anything about Hope that we didn’t glean in the film’s first ten minutes.

Guiding Southpaw‘s remaining 114 minutes with virtually no style is Antoine Fuqua. The action director has made six films since breaking out with Training Day (2001). He’s directed those films with all the subtlety of King Kong swatting at airplanes. His overblown, erratic visual style is again on display in Southpaw‘s savage boxing scenes. With Fuqua and Cinematographer Mauro Fiore taking their camera inside the ring, the pair capture the fisticuffs in a jumbled flurry of gloves and sweat and blood. They pause only long enough to let Billy scream intently into the camera – ’cause that’s how you know it’s intense. They don’t understand that boxing movies aren’t interesting if you can’t see the boxing. Things only get worse once Fuqua takes the action out of the ring and has only Sutter’s stilted screenplay to rely on. Clunky, unfocused and melodramatic, Billy’s brutal tale of redemption eventually collapses on itself. Fuqua tries to dress it up by pitting gritty ‘street story’ style and hip-hop music against James Horner’s mournful score – one of the legendary composer’s last – but nothing can save Southpaw from feeling like a bloody mess. Not even tender, heartfelt supporting performances from Rachel McAdams and Forest Whitaker.

Still, there is an intriguing story of tragic redemption at Southpaw’s core. But Sutter and Fuqua forget that tragedy only has meaning if we care about the sufferer. Burying their hero too deep in adversity, they never allow him enough room for emotional growth. The Billy we see at the end of the film doesn’t feel any different from the one who began it. If Hope can’t be bothered to grow, then we shouldn’t bother investing ourselves in him. Ultimately, Southpaw never believes enough in itself to trust its own humanity. It fights when it should walk away, screams when it should whisper and goes for a knockout upper-cut when a hand on the shoulder would suffice. Just like Billy Hope. 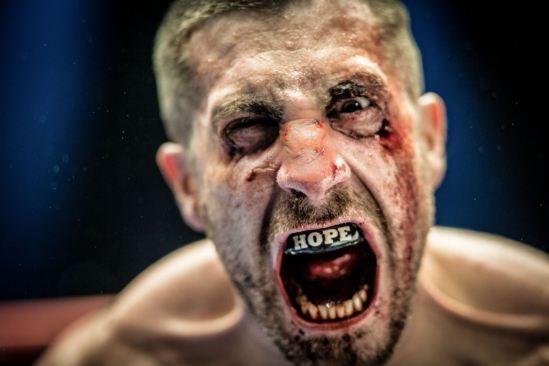 Would that it were. But no, Southpaw is not worth your dollar this week. I was really excited about this film when it was released. I even included it on my Anti-Summer Movie list for 2015. Southpaw is the first official let down from that list. Props to Gyllenhaal – who undertook a startling physical transformation – for turning in a compelling performance and trying his best to save this one. With little support from Southpaw‘s writer or director, his noble efforts are wasted. You can absolutely skip Southpaw this week. But maybe you should mosey down to your local cinema to see if Creed is still showing. There’s a film with a much deeper understanding of boxing and a profound sense of human drama. Everything Southpaw is not.