Hollywood lost one of the greats last week when a tragic plane crash in Santa Barbara, CA took the life of legendary Film Composer James Horner. The two time Academy Award Winner and seven time nominee scored some of the greatest films of all-time including: Star Trek II (1982), Aliens (1986), Field of Dreams (1989), Braveheart (1995), Titanic (1996) and Avatar (2009). 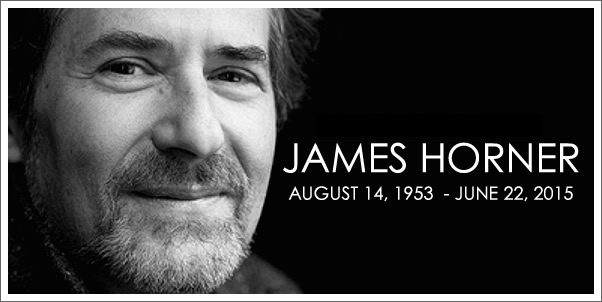 The son of an Austrian immigrant, James Horner was born in Los Angeles in 1953. Horner grew up watching his Academy Award winning father Harry work on Hollywood film sets. The seeds of Hollywood glory were sewn at a young age.

Fascinated by music early in life, James Horner began playing piano at the age of five. Horner’s playing was good enough to earn his acceptance into London’s prestigious Royal College of Music. The young composer returned to the US in his teens and spent the late 60’s and early 70’s earning a bachelor’s degree in music from USC, then a master’s degree and doctorate from UCLA. With a string of low-level assignments from The American Film Institute, James Horner quickly caught the attention of B-Movie auteur Roger Corman. Horner would use his time in the B-movie trenches to hone his skills.

“What working for Roger did for me, was that it helped my procedural skills. How to produce music for literally nothing and how to write the best music for the films that they were.”

Following a bit of uncredited work on Corman’s schlocky horror film Up from the Depths (1979), James Horner was given free range to compose for Corman’s period gangster flick, The Lady in Red (1979) later that same year. Steady work followed. Garnering attention for his innovative blend of traditional, electronic, and Celtic composition, Horner got his big break in 1982 when he scored Star Trek II: The Wrath of Khan. With a bonafide hit to his credit, James Horner’s career was taking flight. By 1986, James Horner had been working steadily as a composer. With films as diverse as Krull (1983), Gorky Park (1983) and Cocoon (1985) to his credit, Horner was becoming a musician of note. Still, it was his work on Star Trek II that caught the ear of young filmmaker (and sci-fi enthusiast) James Cameron. Fresh off the success of his landmark film, The Terminator (1984), Cameron was gearing up for his next effort…a sequel to Ridley Scott‘s sci-fi masterpiece Alien (1979).

Aliens (1986) was a bold step for the young filmmakers. With Cameron in charge, Horner had the daunting task of following the compositions of Jerry Goldsmith, whose pitch-black music for the original Alien was hailed as some of the greatest film music of all time. The gifted composer took the challenge in stride. Aliens would go on to be a major hit (earning almost $86 million at the box-office), and Horner earned kudos for his eerie compositions. The film proved to be the beginning of a beautiful collaboration with Cameron that Horner summed up by saying:

“He likes filmmaking where he takes a lot of risks, as do I. That is what’s most important. We talk about the fact that we like to be way out on a branch where you can hear it cracking, taking a risk rather than playing it safe and being further back on the tree.”

James Horner spent the next decade seamlessly weaving through a series of high profile films – The Rocketeer (1991), Patriot Games (1992), indie productions – Searching for Bobby Fischer (1993), The Spitfire Grill (1996) and beloved children’s films – Honey, I Shrunk the Kids (1989) and Jumanji (1995). He would also rack up three more Oscar nominations for: Field of Dreams (1990), Braveheart (1995) and Apollo 13 (1995)…though his stellar work on Glory (1989) was criminally overlooked by the Academy. When his old friend James Cameron came calling in 1995 about his next film, James Horner’s life was about to go nuclear. The Big Boat, The Big Song and Oscar Gold

Nobody saw Titanic (1997) coming. Sporting the largest budget in cinema history and starring two relative newcomers in Leonardo DiCaprio and Kate Winslet, the Titanic looked set to sink for a second time…until it didn’t. Titanic became the highest grossing film of all time, shattering every box office record in the process and making a household name of virtually everyone involved. That included James Horner, whose lush, Celtic inspired score became the film’s emotional core. At the 70th Annual Academy Awards, Titanic would take home eleven statues. One of those was Horner’s first (and only) statue for Best Original Score. The matter of Horner’s second Oscar win for Best Original Song is a story in its own right.

Co-written with lyricist Will Jennings (and sung with preternatural feeling by Celine Dion), “My Heart Will Go On” was sort of buried in the end credits of Cameron’s three hour epic. As the emotional film proved quite exhausting, many moviegoers found themselves unable to leave the theater as the credits rolled. Their reward for sticking around was James Horner’s carefully crafted, emotive piece of pop. Horner’s song netted him that second Oscar, then he won four Grammys. The song became the best-selling single of 1998 and firmly planted the music of Titanic among the greatest achievements in film composition history.

Of his unexpected crossover success, Horner offered this nugget:

“I think it was sort of at that point that I realized that the music had just transcended being film music and that Titanic was really taking a place in history as an important cinema marriage, as opposed to being another run-of-the-mill movie.”

However you may feel about Titanic (it’s ok to admit that you loved it the first time you saw it…and maybe even the fifth), James Horner’s music made the film immortal. Two decades later, it’s impossible to overlook the musical legacy left in its wake.

After the mammoth success of Titanic, James Horner could do whatever the hell he wanted. That’s just what he did. Over the nearly two decades that followed, Horner continued to work prolifically, scoring films large and small across every genre. The enigmatic list of films is just too long to list here (but not too long for Wikipedia). In the early 2000’s, Horner landed two more Best Original Score nominations for A Beautiful Mind (2001) and House of Sand and Fog (2003). His final nomination came when he once again teamed up with Cameron for the score to Avatar (2009). In case you hadn’t heard, Avatar unseated Titanic to become the highest-grossing film in history. Quite a feat.

Grand in its aim, bold in its execution, James Horner’s music has inspired, frightened, and often overpowered us. And now it’s all over.

The Day The Music Died

While music was always James Horner’s first passion, aviation played a very close second. Family, friends, and fans alike were shocked when they heard that Horner’s single-engine plane (hand-built by Horner himself) had crashed and taken his talents from us. I’ve always thought composers should die writing music like Mozart in Amadeus, but what do I know? I suppose there’s a bit of solace since he died doing something he loved, but his death leaves a massive hole in the world of film composition that may never be filled.

His musical legacy firmly in place, Horner’s legend can only grow from here. The prolific composer has three films set for release this year in The 33 (2015), Wolf Totem (2015) and one of my anti-summer movie picks, Southpaw (2015). It should be interesting to see how Horner’s music for these films complements, completes, or alters the composer’s ouevre.

The funny thing about legacies is that they tend to grow in the wake of death. James Horner was a titan when he was still with us. Where does he go from here? Leaving us with a body of work that music and film lovers alike will be discussing for decades to come, only time will truly tell.

That being said, it seems foolish to close things out without offering a morsel of Horner’s music, so here’s a little taste from one of my favorite films.