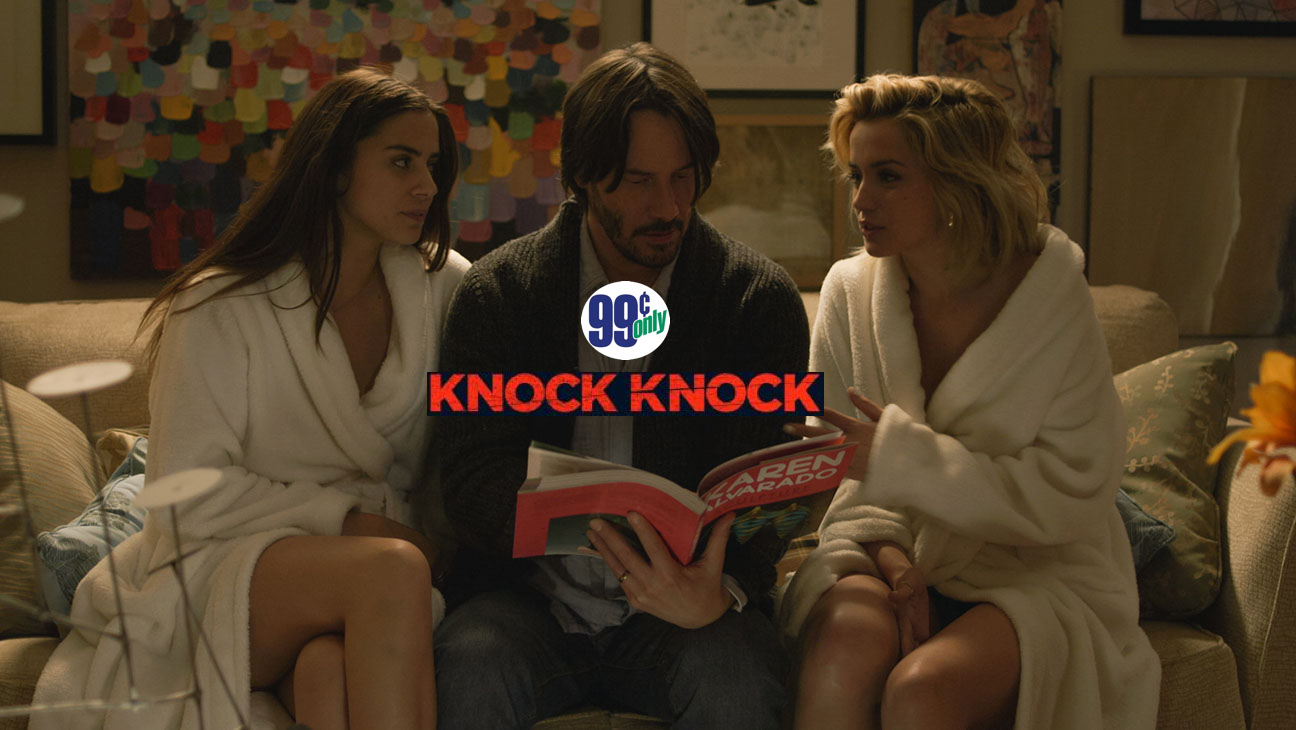 NOTE TO READERS: The featured $0.99 rental is actually a little post-apocalyptic film starring Chiwetel Ejiofor and Margot Robbie. It’s called Z For Zachariah. I didn’t think much of it when I reviewed it back in August and I really did not want to watch it again. Luckily, iTunes always features an indie flick for the same low price. So…

You Don’t Look That Dangerous

Home alone while his wife and kids hit the beach for a holiday weekend, Evan (Keanu Reeves) is looking forward to a little peace and quiet so he catch up on work. But his working weekend plans take an unexpected turn when a driving rain storm strands two beautiful women (Lorenza Izzy & Ana de Armas) on his doorstep. Nice guy that he is, Evan invites the scantily clad damsels in out of the storm. Big mistake. What begins as a simple gesture of kindness quickly turns into a night of unbridled passion – ’cause why wouldn’t it? It also sets in motion a twisted game of cat and mouse that may cost Evan everything he holds dear – including his own life. Yep, the tension is pretty high throughout Knock Knock. Too bad the drama is not. Featuring wooden acting, stilted writing, and an egregiously misguided sense of morality, Roth’s latest opus plays out with all the flair of a sledgehammer smashing a watermelon. He creates a truly abhorrent piece of cinema in the process. Ugh, I should’ve just watched Z For Zachariah again. 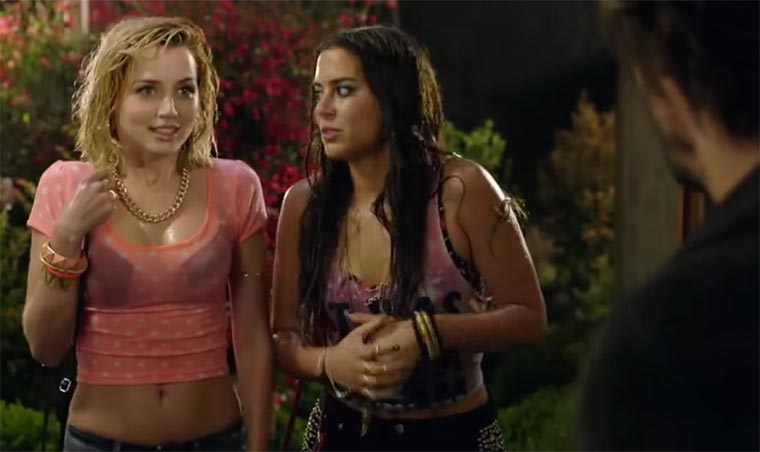 I Believe That Things Happen by Your Own Design

It’s easy to see where things went wrong with Knock Knock. As with every lousy movie ever made, bad films begin with bad writing. Co-written by Roth, Nicolás López, and Guillermo Amoedo, Knock Knock‘s screenplay is poor writing for the ages. The film opens with an interrupted attempt at coitus between Evan and his loving wife, Karen (Ignacia Allamand). Such is the life of a parent. But it’s Father’s Day after all, and their children come bearing cake and gifts. It should play as a touching family moment. But Roth & Co.’s dreadful dialogue breeds labored performances from all involved. As a director, Roth lacks the skill to draw palpable emotion out of his actors. Rather than poignant, the scene feels phony and disaffected … B-Movie bad.

And there is ample sex and violence throughout Knock Knock. This is Eli Roth we’re talking about. But in spite of its supposed provocations, Knock Knock is a surprisingly subdued film. That’s not a good thing. As much as I generally detest Roth’s work, I’ve always sort of respected that he was willing – even eager – to push his stories into the realm of silly, morbid lunacy. At times, he’s even approached that rare dimension of grotesque beauty. Yet, Knock Knock is a decidedly flaccid affair. The sex is boring. The violence is tame. Every time you think Roth is primed to take the story to the next level of psychological torment, he stops short and plays it safe. Every time you think a legitimate moral quandary might affect the narrative, some foolish course of action leads the film in another direction. With no emotional or moral stakes at play, Knock Knock becomes a vacuum of a film that offers little insight into the cause and effect of morally reprehensible behavior. It’s an altogether empty affair masquerading as a cautionary tale. A tale openly shouting that nothing good can come from infidelity. It’s a noble message, I suppose. But if you don’t know that already – well then … 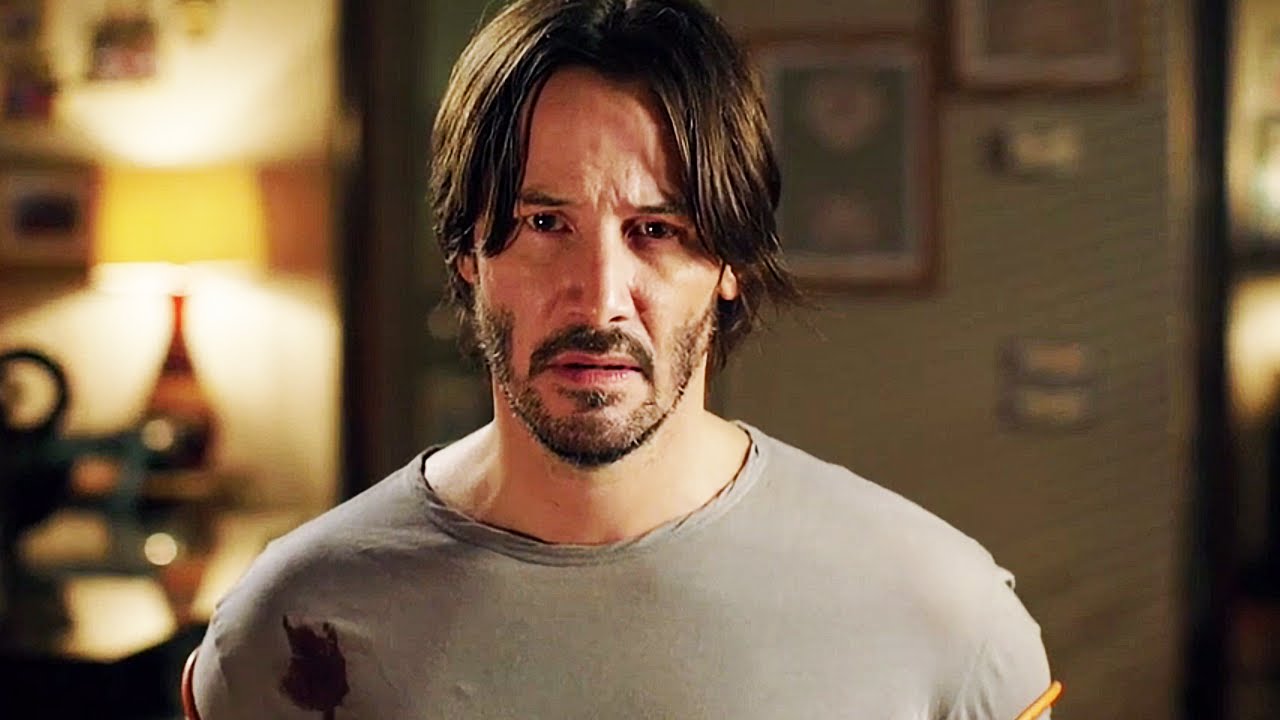 Let me be perfectly clear here: Hell. No. Not only is Knock Knock not worth your dollar this week, it may go down as the worst movie I’ve ever seen. There’s simply nothing to like about this ugly, emotionless mess. Avoid it at all costs. And for that matter, avoid anything with Eli Roth’s name on it. Any sense of intrigue or inspiration gleaned from Roth’s early entries into genre fiction have long since faded. With Knock Knock, Roth hits an all time low and proves himself a filmmaker as devoid of talent and he is of vision. If you’re still in the mood for a bit of home-invasion cinema, you can rent Funny Games – Michael Haneke’s 2008 remake of his own 1997 film – for just $3.99 from iTunes. It’s brutal. It’s provocative. It’s flawlessly acted and emotionally devastating. Bravura filmmaking in every sense of the word. Everything Knock Knock is not.