This week finds Bill Murray unwittingly up for sainthood as the cantankerously likable soul of St. Vincent.

“My Life, My Problem”

We meet the titular saint, Vincent McKenna, as his falsetto of a voice breaks over a blank screen. He’s telling a joke about an Irish guy trying to find work. It’s not the A-material, but it’s funny enough for the mid-day drunks at the bar we find our fair saint occupying. The patrons smile and nod as he lays the punchline on them and Vincent gives a knowing look as if to say, “you’re welcome” before gulping his own drink. If we found out nothing else about the man in Theodore Melfi’s St. Vincent, this opening scene would be enough to understand the character. He drinks, he smokes, he’s got a wicked/vulgar sense of humor and a world of pain behind those piercing blue eyes. It’s a promising start for St. Vincent, a charming little film with a big performance from Bill Murray as the curmudgeonly Vincent.

Yes, life is roses for old Vincent McKenna. Living the bachelor’s life, he’s got plenty of time to burn at the bar (but he’s a lousy drunk), or the race track (but he’s a lousy gambler), or carrying on with a very pregnant Russian prostitute (but she’s a very pregnant prostitute even if she is the lovely Naomi Watts). Oh…did I mention he’s funding this hedonistic existence by drawing off of a reverse mortgage on his home? No way that could go wrong, right? Yep, everything’s just great for Vincent.

It’s no surprise that Vincent is not interested when he gets new neighbors in the form of single mother Maggie (a wonderfully understated Melissa McCarthy) and her son Oliver (newcomer Jaeden Lieberher). Through happenstance (and some questionable decision-making from Oliver’s Mom) Vincent finds himself playing babysitter to scrawny, young Oliver. Yep, St. Vincent is gonna be one of those movies. Vincent takes Oliver under his wing and begins teaching the kid everything he knows about life…wait, that can’t be good. Trips to the race track and the finest dive bars in Brooklyn abound. Vincent even teaches the kid how to defend himself against the school bully. Their story finally goes all gushy when Oliver is tasked with reporting on a “real world saint” at school. Wanna guess who Oliver ends up picking? Here’s a hint: it’s not his over-worked mother who is doing all she can to keep food in his belly and a roof over his head.

Much of St. Vincent relies on the question of what makes a true saint in today’s world. That question isn’t exactly answered in St. Vincent and this is ultimately where the film misses its target. 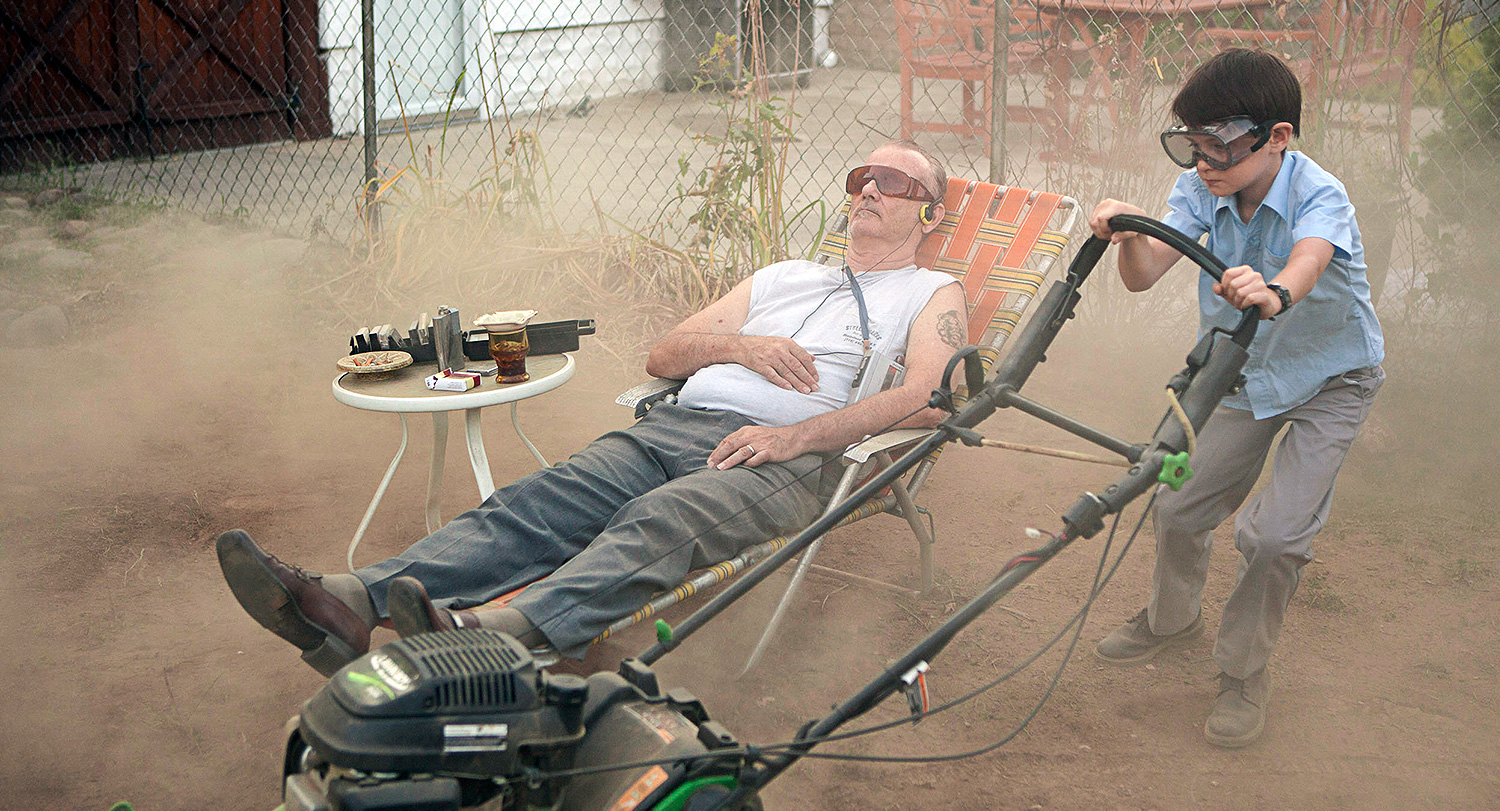 With all the saintly lip-service paid in St. Vincent, you’d think Theodore Melfi’s script would have a little more insight into the matter. Unfortunately the writer/director doesn’t focus on any aspect of Vincent’s life long enough to find out if he’s truly worthy of the title (even if just for a school project). We do learn a little bit about Vincent. He’s a war hero (Vietnam) and a husband to a wife long-suffering from Alzheimer’s (he visits her weekly in some of the films more touching scenes). Substance is nice, but sometimes one extra detail is just that…extra. The war hero back-story feels tacked on and only affects the story when it’s convenient. It’s too easy, too writerly, and doesn’t feel true to Vincent.

That truth shows in the charming, even tender Vincent we see with his wife. These scenes are more than enough to draw us deeper into his troubled soul, but Melfi chooses to make a mystery out of who the Alzheimer’s woman is to Vincent. It’s an annoying “movie trick” made worse because Melfi actually did his job as a writer. In Vincent’s first visit to the woman, we see that caring side of him pour over. Nothing is spelled out, but the subtext is clear. Melfi writes the scene beautifully. It’s obvious who the woman is. No tricks necessary. There’s no reason to complicate something so lovely and simple.

On the subject of complicated, Melfi again gets unnecessarily tricky in a scene where Vincent steals from Oliver. There’s a good reason Vincent does it, but the act is still a terrible betrayal. It’s Vincent’s rock-bottom moment, but it feels a little too big. A smaller, simpler dishonesty (a meaningless lie, a cutting word) would suit St. Vincent better. Sometimes bigger is just boring. The moment adds almost nothing to the story and oddly, that betrayal is never mentioned again. St. Vincent ends with nothing resembling closure to what was built as an integral moment in Vincent’s development. We don’t even know if Oliver ever found out. So, why bother doing it in such a big way?

Even without big moments, it never feels like Vincent and Oliver have the small moments needed to forge a real relationship. Their scenes are fun, but the two always feel more like playmates. What Oliver needs is a role-model. Vincent can teach Oliver how to fight and how to bet, but he cannot teach Oliver how to be a person. He’s a good enough guy and he seems to mean well some of the time, but a saint? Not even close. Hell, even Mother Teresa is one miracle short of that honor. 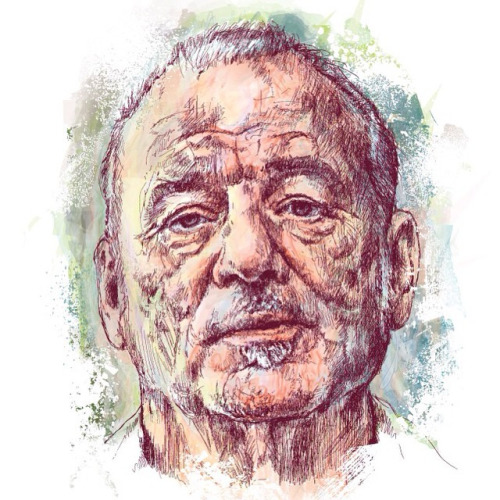 I feel like I’m dumping all over St. Vincent, but that’s not really my intention. St. Vincent is not a good movie, but it’s not a bad movie either. It’s funny and often quite charming and features mostly solid performances (save for Naomi Watts, who overplays every moment she’s in). The overall failures of St. Vincent’s utterly lazy script almost completely overshadow its successes…not to mention an absolutely luminous performance from the irascible Bill Murray. In St. Vincent, Murray again takes on the role of Patron Saint of Indie Film by working with first-time writer/director Theodore Melfi, who has lots of short-film work under his belt and you can feel that short-form style bleeding into his first feature.

Much of his script feels vignettey and overly sentimental, if not outright sappy. Murray admitted as much after the Toronto premier of St. Vincent when he quipped, “I thought it would work if we could avoid being schmaltzy…I think we almost did.” Murray clearly understood the short-comings of the script, and brought a deep ocean of melancholy to his role as Vincent. The sadness is what makes Vincent real, what makes him whole. That he manages to keep it buried (but just visible enough) behind the wiseass facade of Vincent for the bulk of the film is a testament to Murray’s abilities. He’s the rarest of actors that can be funny, miserable and vulnerable in the exact same moment. His deeply layered performance almost single-handedly keeps St. Vincent from sinking under the weight of its own earnestness.

Here’s the thing: St. Vincent isn’t a very good movie, but I’m going to recommend it anyway because Bill Murray is just so much fun to watch. So yeah, go ahead and drop that $0.99 on St. Vincent this week. Just don’t go in expecting the magic of Groundhog Day or the heart of Rushmore, the charm of Lost In Translation, or the general unease of Broken Flowers. St. Vincent will not live up to Murray’s best work, but for $0.99 you shouldn’t miss it. For that price I’d even consider watching Murray’s Larger Than Life again! After all, he is Bill Groundhog Day-Ghostbustin’ Ass Murray.