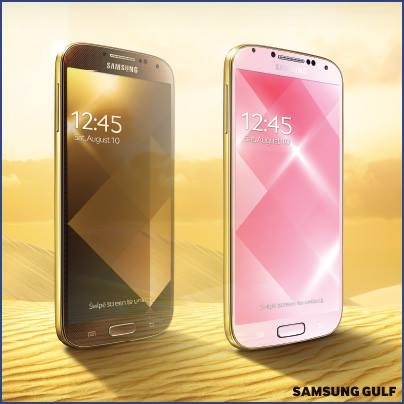 This may not come as a surprise. Samsung is going the Apple way (again?). After the Cupertino giant launched its premium iPhone 5S in Gold color on September 10, Samsung has rolled out its flagship Galaxy S4 in a Gold Edition.

Golden Inspiration for the Galaxy S4

The Gold Edition Samsung Galaxy S4 is available in 2 finishes – the Gold Brown and the Gold Pink. Apart from the new paint job, the device is the same that Samsung launched earlier this year. Let’s have a quick look at the Galaxy S4’s specifications again:

Introducing the new #GalaxyS4 Gold Edition – for a style that’s uniquely yours! pic.twitter.com/XkFu4zceHT

HTC: Been there, done that

The Galaxy S4 isn’t the first phone to launch in a fresh new color after release. HTC’s One in fact, beat Samsung to it. The HTC One launched in Gold last week, custom made by Gold Genie. The phone is available in 24-karat gold color, but is ridiculously expensive at £1579.17.

The HTC One previously launched in Glamour Red in the UK and in Blue on Verizon in the US this year. The Samsung Galaxy itself launched in an exclusive ‘Arctic Blue’ color in the UK too.

The slightly cheaper iPhone 5C – another break in tradition for Apple – is available in 5 different colors. These are Blue, Green, Pink, Yellow, and White. Both of Apple’s handsets have sold remarkably well, breaking all previous records to achieve 9 million units sold in just a week.

Samsung’s Galaxy S4 doesn’t have to feel too bad. The handset has been a bestseller itself. Samsung reportedly sold 20 Million S4s within 2 months of release – the fastest ever for the company.

For now, it seems like Galaxy S4 Gold will only launch in the Middle East.

Does the Galaxy S4 Gold Edition appeal to you? What do you think about this newfound interest in gold by phone makers? Let us know in the comments below.