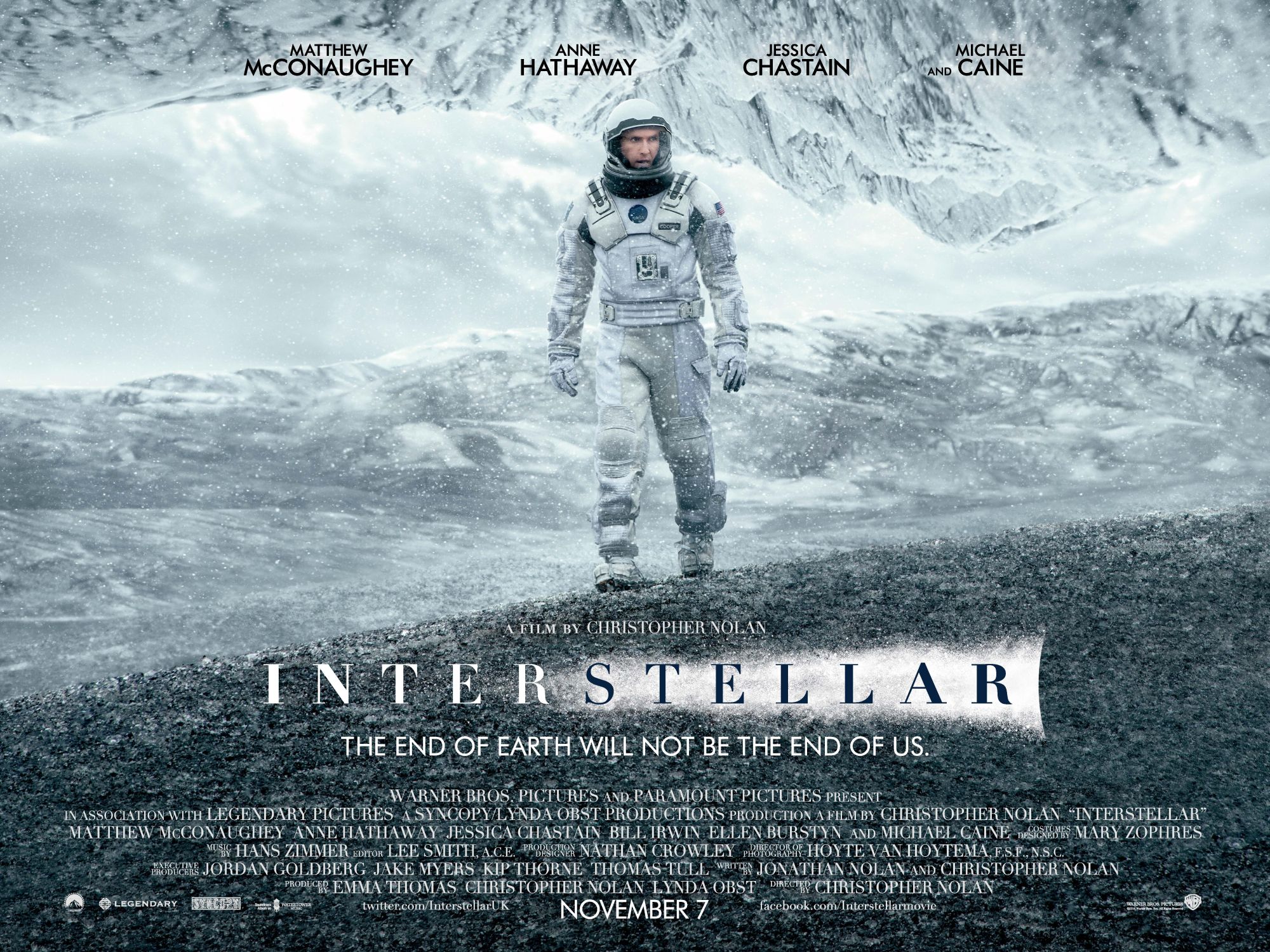 Christopher Nolan’s Interstellar has been out for a long time now, but unfortunately, I didn’t have the opportunity to see it until just this past month. After I finally saw it, I couldn’t stop thinking about it for days afterward. I watched it again, and I’m still fascinated by it. It’s a smart movie, and one of the most scientifically accurate sci-fi movies I have seen in a while. Some have even compared it to Stanley Kubrick’s 2001: A Space Odyssey, though 2001 is still bigger in significance for the film industry and scientific community. Many ideas about the future of the human race and our conception of our world and universe are expressed in a thoughtful, entertaining manner in this film. So if you haven’t seen Interstellar yet, go see it ASAP. It’s worth it.

“Find Us A New Home” 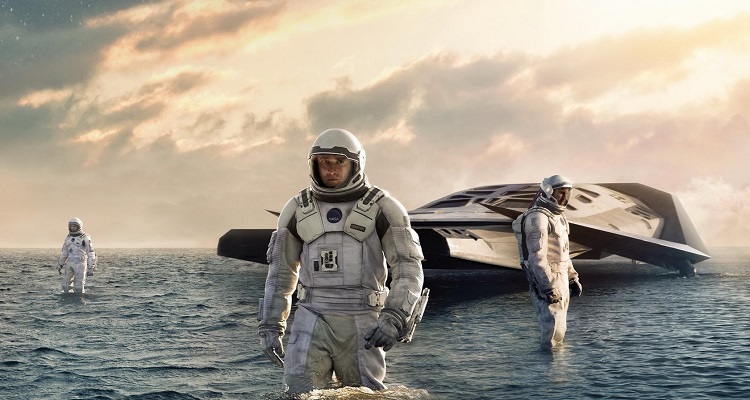 Directed and written by Christopher Nolan (The Dark Knight trilogy), along with his brother Jonathan Nolan, this film tells the story of an intrepid crew of scientists who leave our solar system in order to find a suitable planet to colonize, because the Earth is dying. Cooper (Matthew McConaughey) is an engineer and former NASA pilot who became a farmer due to the increased need for farm-grown food. He leaves his daughter Murphy “Murph” Cooper (young: Mackenzie Foy, adult: Jessica Chastain) and his son Tom Cooper (young: Timothee Chalamet, adult: Casey Affleck) at the family farm and takes part in an interstellar journey to another universe with planets that show promise for sustaining human life.

Along with his team of scientists, Dr. Amelia Brand (Anne Hathaway), Doyle (Wes Bentley), Romilly (David Gyasi), and their helpful robots TARS (Bill Irwin) and CASE (Josh Stewart), Cooper travels through a wormhole to another solar system, which also has a situation-complicating black hole. There, they work against the clock to investigate the planets which have been deemed potential colonization candidates. Along the way, they and their fellow scientists back on Earth ponder the future of the human race, dimensional theory, relativity, and other scientific stuff, some of which is difficult to understand.

A Masterpiece of Realistic Science Fiction 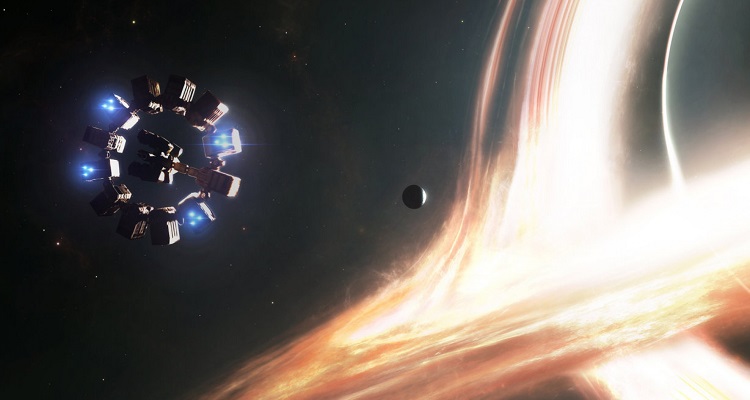 Interstellar definitely has a lot going for it. Unlike a lot of sci-fi movies, it places a heavy emphasis on reality and actual science. Granted, this film is set in a future time, so elements of future technology exist (like the friendly astronaut robots), but such technology does not overpower the plot. In fact, one might be reminded of the Tom Hanks film Apollo 13, along with the envelope-pushing 2001: A Space Odyssey. There are no loud explosions or fancy sci-fi spaceships. Instead, we are shown the silence and darkness of space, the recognizable technology of NASA spaceships, and the hugeness of the universe.

The visuals of the alien planets are gorgeous, and the CG is well-used without being overdone (there are a lot of practical effects and real settings). The camerawork is excellent, as well, following the characters and their spacecrafts as they experience zero gravity and the conventions of space. There are scenes in which ships dock on a space station, and scenes in which you see spacecraft mechanics working realistically. But one of the most impressive elements of this film, which helps create the epic, out-of-this-world feel, is the music, written by Hans Zimmer. Using organs, pianos, and strings, he created a kind of epic classical music that somehow fits in perfectly with the theme of space exploration, rather like Kubrick’s 2001 did. There may even be some scenes that you rewatch not for the action, but for the beautiful music that helps drive the plot. That said, the music is not distracting, it’s just awesome. 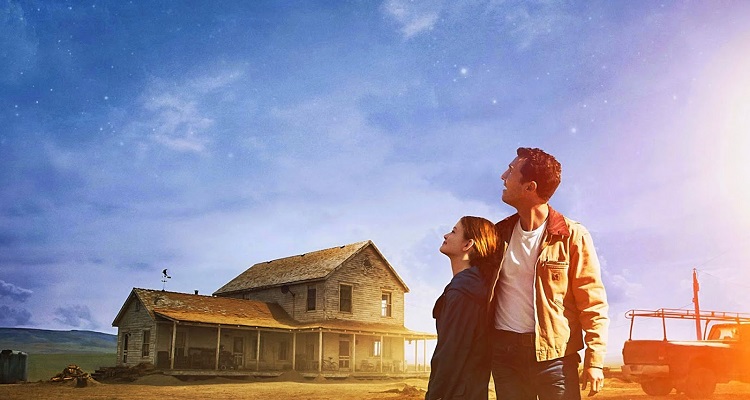 While parts of it might be complicated and hard to understand, Interstellar is definitely an amazing work of film storytelling. Some naysayers don’t like it for its complicated nature or for the occasional scientific fallacies, but those are the only major detractors. Otherwise, the movie does a fairly good job of explaining what’s going on and helping the audience understand the scientific dialogue that happens among the characters.

Interstellar is, in fact, a film that doesn’t need, and probably shouldn’t have, a sequel. It’s great as a standalone film in its own right, and a sequel would be unnecessary and actually a bit too much. Christopher Nolan is known for not creating sequels, with the exception of his Batman movies. He prefers to make something new every time. As an individual film, Interstellar does an excellent job of developing, resolving, and ending the plot. It leaves the audience to mull over the story they have just been told without the need for more.

This movie has been highly rated and regarded as a masterwork of science fiction. So if you have not seen Interstellar yet, I highly recommend it.