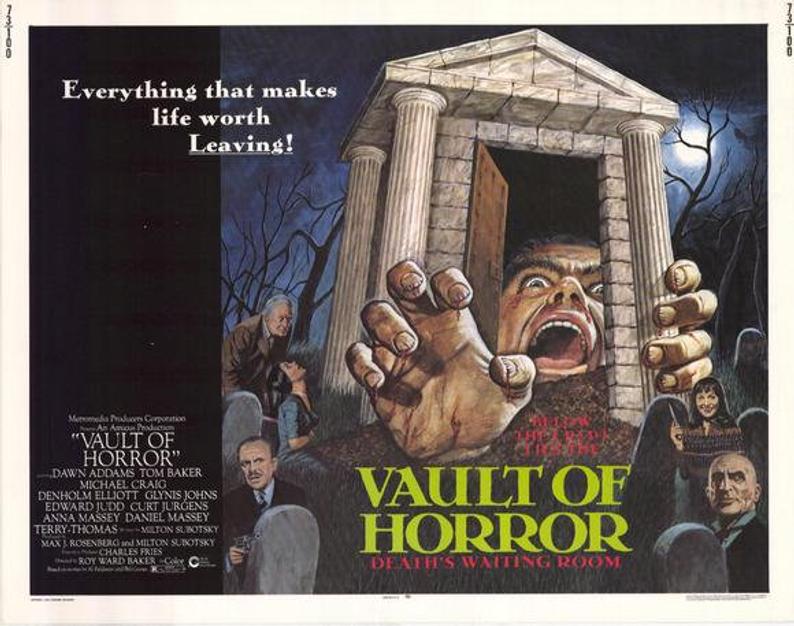 Welp. I’ve truly done it this time. Since the inception of this fun little idea of mine – still relatively infant, if you ask me – I’ve seen trailers that have inspired varying levels of enthusiasm, but few that have left me as completely and utterly baffled as The Vault of Horror. I’m a little excited.

I genuinely don’t know what to expect. Besides, obviously, greatness. How could I possibly receive anything less, with a tagline like: “Madness, voodoo, vampires, torture and terror-all the things that make life worth leaving.”? It may seem like I’m being ironic, but I need to now assure you, with absolute, nail biting sincerity, I am genuinely delighted by that tagline. The trailer is a minute and a half, and several seconds worth of that is dedicated to listing the cast, a veritable who’s who of who? I’ve heard of exactly zero of the people involved, but I am willing to attribute that to the fleeting nature of fame and the fact that the movie was released in 1973. The trailer gives virtually no information, beyond suggesting, perhaps, that most of the action takes place at the same cemetery, and – unless the tagline lied to me, a possibility I refuse to court – presumably involves voodoo, vampires, torture and terror, you know, all the things that make life worth leaving. So please be forgiving of what will be my undoubtedly off base, wild speculation. Here goes!

There was one ashen fellow we saw more than anyone else in the trailer. I’m going to guess he’s the caretaker of the cemetery that houses the titular vault of horror. Maybe it’s a family cemetery. Those exist, right? And he knows what can happen if the proper voodoo incantation is chanted to awaken the denizens of the graveyard. When a corrupt city planner attempts to buy the land to build condos over top, Vincent Price Lite, desperate to save the family business, performs the voodoo spell, but quickly loses control over the whole operation, so also needs to shut down all of the aforementioned torture and terror. Hijinks ensue!

I wish there were some reasonable way of showing you, dear friends, the faces I was making while writing that synopsis. Imagine, if you can, someone who was simultaneously eating a lemon, pondering an extremely challenging test question and remembering half of a joke. That’s roughly what we’re dealing with here. I have no doubt that this movie is going to be utter garbage. I’m still pretty jazzed for it! The Vault of Horror is available for streaming on Shudder, for anyone who wants to watch along with me tomorrow night.