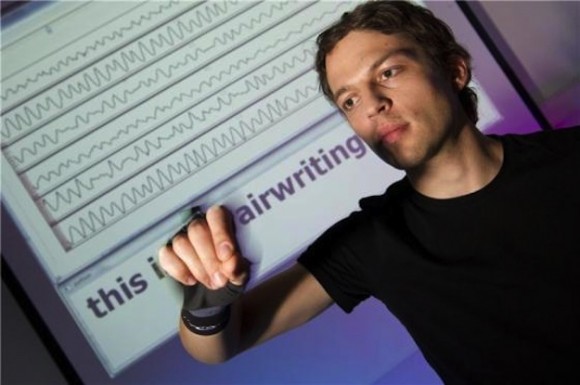 An Air Writing wristband? Ask any seasoned writer about their favorite platform for writing and you’ll be surprised to learn that most of them still prefer writing words physically on paper. Even though typing is much faster, accurate and simple; but that feeling you get when putting words on a piece of paper is just incredible. But, now we have something referred to as Air Writing, and from a wristband! Whether you’re interested in the latest tech or just some help with assignments, these wristbands may be exactly what you’re looking for.

Air Writing Wristband is the Future

In today’s world, when smart devices have dominated our lives, and become a major part of our lives, typing on a touchscreen has become natural and popular. Although, nothing beats typing on a traditional keyboard be it a Desktop/Laptop, still most of the typing nowadays is being done on touchscreen devices. In the case of smartphones and tablets, where the former offers smaller screens that are not suitable for writing tasks; while the latter has keypads too wide for even dual-thumb typing.

In these scenarios, handwriting recognition is a great way to write, mixing the awesomeness of both worlds, modern day tech and classic pen & paper writing. Sadly, handwriting recognition isn’t so refined at the moment. It is not able to recognize everyone’s highly different handwriting styles with any real accuracy. No need to worry though as Scientists at Germany’s Karlsruhe Institute of Technology may have found a different method to write effectively on a device – A wristband that is able to detect different motions and movements of the wrist, and translates the gestures into writing; thus an air writing wristband.

Instead of using a touchscreen to recognize gestures, KIT’s air writing wristband lets its wearer write words in the air, which it will detect with the help of accelerometers and gyroscopes. These gestures are then transferred to a computer over wireless connection, and the system then makes sure that the user was actually trying to write something and not just making random gestures; like waving, saying hello, etc.

So, if you’re doing something else with your hand (We don’t want to know) then the system won’t type any gibberish that makes no sense at all. This used to happen to me all the time when I tried to use speech-to-text in my old MS-Office, where I’d say “Hello” and it will write “Who Do” and other stuff that just doesn’t make any sense.

Instead of the traditional gesture recognition, the air writing wristband also features pattern recognition. For the attribute of each letter of the alphabet, a statistical model has been developed that takes different types of writing styles into consideration before typing the words on screen. For example, the wristband can easily recognize the difference between writing in All-Caps.

The recognition system has nearly 8000 words in total, with an error rate of 11%. Although, that rate is heavily affected by individual writing styles. So, when the system is adjusted to someone’s specific writing style the error rate will drop down to just 3% – that’s quite impressive for a technology like this.

Ready to Wave Your Smartphone in the Air?

The KIT team is still working on how to improve the device, they aim to make it even smaller so that it is comfortable to wear, and they are also working on how to add more words to the system’s list. There’s even good news for smartphone owners, as the team wants to integrate this technology into smartphones, so that the user can wave their smartphone in the air and it will type words on the screen.

Although, it seems stupid to wave around your phone in order to type, people may think you’re crazy, and there is a slight chance of hurting somebody as well. The team has been granted $81,000 from a Google Research Award to aid in the development of this device; and make it even better for practical use. The air writing wristband is definitely a great invention and it would be cool to own one of these. I hope they integrate it with the upcoming Google Glasses, that’d be awesome.

Do you think the airwriting will be any more successful than keyboards or even on-screen keypads? Do you see yourself using airwriting in the future? Let us know