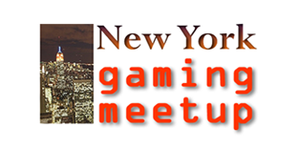 A few nights ago, I went to New York Gaming’s February games demo, held at Microsoft. NY Gaming regularly puts on great networkers and professional development classes too, but the monthly games demo is my favorite. It’s always exciting to see what my NYC neighbors are producing, and usually the atmosphere feels more like a friendly exchange of stories and slides, or a hobbyist swapmeet, a marked contrast to some of the more marketing-focused events here in Manhattan. If you’re in New York, you can sign up for alerts about the monthly game demos and other events on the group’s Meetup page.

I wrote about Awkward Hug’s new photogame Bout, when it first came out, but it was lovely to see it in action. This photo game resembles party favorite Apples To Apples, or the evil version, Cards Against Humanity. Bout players ask their friends to submit a photo answering a challenge, something like “This isn’t very good to eat” or “My partner hates when I do this”, and when their friends have taken a photo to reply, the original poster judges and picks a winner.

So far, that game has avoided the obvious question that plagues user-generated content — how long until someone decides it’ll be super hilarious to upload a photo of his junk? — by connecting players with their real-life friends only. Future versions will allow players to connect with strangers, as well.  Awkward Hug’s previous game, Socks, Inc., managed to use user-generated photos for creative play very successfully, and I’m sure Bout will find balance between moderation and connectivity here as well.

New York Gaming tends towards electronic games, so  I was surprised to see an offline game presented. Nika is a boardgame from Joshua Raab and Chris Hernandez. The game is a turn-based strategy game inspired by warfare between Greek city-states. Players build phalanxes, and attempt to conquer their neighbors. The game can be players by 4 players, forming 2 cooperative teams, or by 2 players, each controlling 2 city-states. Nika is greatly influenced by historical battles, but seems well-balanced, giving players of all city-states a good chance at winning, regardless of historical military advantages.  (I’m looking at you, Axis & Allies.)

Nikhil Sinha’s Facebook game Spell or Die blends the familiar mechanics of asynchronous online Scrabble with aggressive attacks, like explosions. If you can’t out-spell your friends, just blow them up!

AnyoneGame’s mobile Karaoke game Just Sing It asks players to pick a song, record themselves singing a few bars, apply  a voice filter or two (what the developers call “Instagramming your voice”), and then challenge another player to guess the song. Users can hear their friends singing songs and guess which song it is by selecting title words from the block of possible words on the bottom of the screen. The faster the guess, the more coins earned by both competitors. Unlike Bout, the presenters of JustSingIt seem to encourage playing with strangers, and mentioned that existing players use the game to flirt. (Kids these days! Back in my day, a guy had to stand with a  boombox on a girl’s front lawn!)

Redcandy’s Tin Man Can, is a cute side-scrolling adventure about a little robot trying to get home.  The game’s been published by Chilingo and is currently available in the App Store.

Tossers was built by Vikram Subramanian and Ben Johnson, at KillScreen’s recent Ouya jam. The game was inspired by Curling, because of course it was. In Tossers, players grab and throw your partner at a ring of marbles, to knock marbles out of the ring for points. The game is designed for social value, which in this case is yelling while playing, and it’s a rare videogame that’s also great fun for spectators. Maybe curling is onto something…

Future plans for the game include inviting local artists to develop backgrounds and icons to reskin the game, which is a great next-step for a socially-oriented gamejam game. The developers also hope to create an competitive AI that is “as smart as a puppy”, based on the principle that a cute, dumber AI is a more rewarding opponent than a straight AI.

Jon Stokes also presented a charming postmortum on his iOs game, Whiskers. Whiskers is a cutely indie personal project, asking players to take on the role of moustached kitties and then fight! Stokes invited four attendees to come up and give Whiskers a go, and all the players picked it up with almost no learning curve.

Unlike the rest of the games at the Meetup, Whiskers was presented as more of a postmortum discussion on the development process, with Stokes’ mediation on indie game development in general. Stokes recommends really personal connections with a game, which is clearly part of Whiskers development, and also warns would-be developers against expecting a completed game too quickly.

As always, it was great to see what my neighbors are creating and publishing.