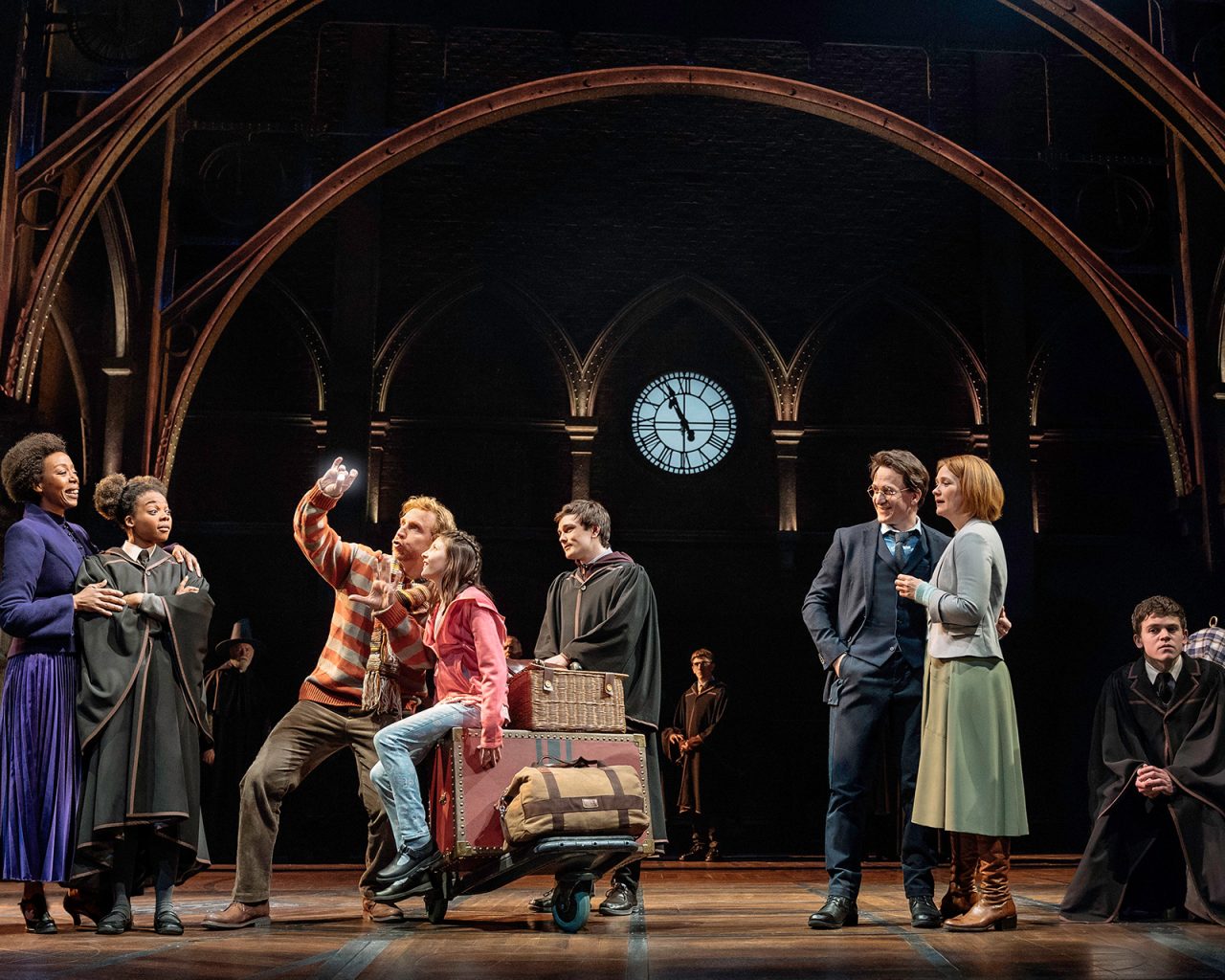 Broadway shows and comic conventions aren’t always a natural fit. Well that’s Broadway shows that don’t have “Harry Potter” in the title. One of the very first panels at New York Comic Con 2018 was a discussion with the cast of Harry Potter and the Cursed Child. Once the packed house crowd solemnly swore that they were “up to no good” in full voice, the cast was introduced. The group included the actors who first brought the roles to the stage in London. Since then the show has opened in New York, with the same principle players reprising their roles. There have also been quite a few prestigious awards thrown their way in the process.

That award-winning cast includes Jamie Parker (Harry), Noma Dumezweni (Hermione), Paul Thornley (Ron), Poppy Miller (Ginny), Sam Clemmett (Albus Potter), Anthony Boyle (Scorpious Malfoy) and Alex Price (Draco). Harry Potter and the Cursed Child has received almost universal praise from critics and fans since it opened in London in 2016. Well the stage production has. Corresponding with that initial run, the script was released as a hardcover book boasting to be the eighth story of Harry, Ron and Hermione. That printed version has had a much more mixed reaction among fans. It was mentioned during the panel that there are secrets in the production that would surprise those who have only read the stage play.

The cast answered questions about their experiences during the play’s run and their Potter knowledge prior to their casting. A common thread was “fear of missing out” as Dumezweni put it when first coming to the books. She and Thornley both mentioned reading the series after witnessing it being read by adults on the Tube in London. You would think performing as Harry Potter every day for several years might ruin the magic of the franchise for a person. Not for Parker, who spends his free time with the character as well. He records 20 minutes of him reading from the Harry Potter books each day to play for his son. That way while Parker is working at bedtime, he can still be there through video to read a bedtime story. He claims to be on his seventh re-read of the series.

For the actor who looks quite similar to the aged-up Daniel Radcliffe in the epilogue of Deathly Hallows Pt. II, the similarities don’t end there. He happened to also attend a boarding school in Scotland when he was 11. No word on if he got there by magical train. Obviously the casting department got things right. That goes for Thornley as well, who couldn’t help but mirror Ron Weasley with several of his answers matching the sentiments of our favorite Quidditch keeper. When asked what his favorite Harry Potter book is, Thornley deflected. He answered, “the fourth one” before drawing a blank on the name. “It’s not a huge leap, is it?” He said of playing the sometimes absent-minded Ron. Even the family bonds fit with Thornley who said that Miller, “feels like she’s my sister.”

Fans in attendance were treated to a clip from the play that showed Clemmett’s Albus Potter struggling with how to use his wand while a new student at Hogwarts. The highly choreographed sequence ended with the other students mocking Potter because of his famous dad. There runs one of the main plotlines from Cursed Child. 19 years after Deathly Hallows, Harry and Ginny’s children are off to Hogwarts along with Ron and Hermione’s. Draco also has a son in attendance, Scorpious, who becomes quick friends with Albus. Apparently, it’s not so easy when your dad is “the boy who lived” and one of the most famous wizards in history.

By a show of hands, the audience was very much split between fans who had seen the play and those who hadn’t. The cast marveled at the fact that some have even seen it multiple times despite how difficult it is to land tickets. Dumezweni wanted it known that “anyone can see this play” because of the real human situations that are presented in the context of the Wizarding World. Her message of inclusion extended to her experiences with fans as well. She joked about the controversy surrounding her casting while mentioning multiple occasions where fans of color have come up to her in appreciation of her version of Hermione.

That was a significant takeaway from how the cast spoke of these iconic characters during their Comic-Con debut. Much like Daniel Radcliffe, Emma Watson and co. are the film versions of the characters, this group is the stage version. With that stage version, there is a Harry who can sing. At least the actor can. After much prodding from his castmates and the audience, Parker sang some Frank Sinatra too much aplomb. He’s a regular old Celestina Warbeck. Another NYCC exclusive plugged the upcoming release of Cursed Child’s Imogen Heap led original soundtrack with the premiere of a track. The singer sent a video from her tour overseas to introduce it. This isn’t a musical however, just a play with background music. Any Potterheads who have been holding out on the play may be comforted by Thornley, who said that when he was asked to read for the role of Ron Weasley, he replied “I’m really old” not connecting the dots that he’d be playing an adult version of the character. That’s our Ron.

Harry Potter and the Cursed Child is now playing in London and New York. It will be opening in Sydney, Australia and San Francisco in 2019 as well as Hamburg, Germany in 2020. If you do land tickets, be sure to “keep the secrets” or the cast will have to call in the Death Eaters.

If you’re planning on catching the New York show at the Lyric Theater on Broadway, check out the interactive seating plan where you can see seat photos and user reviews, earn points towards $25 Telecharge vouchers, and even add your own photos to help future attendees.