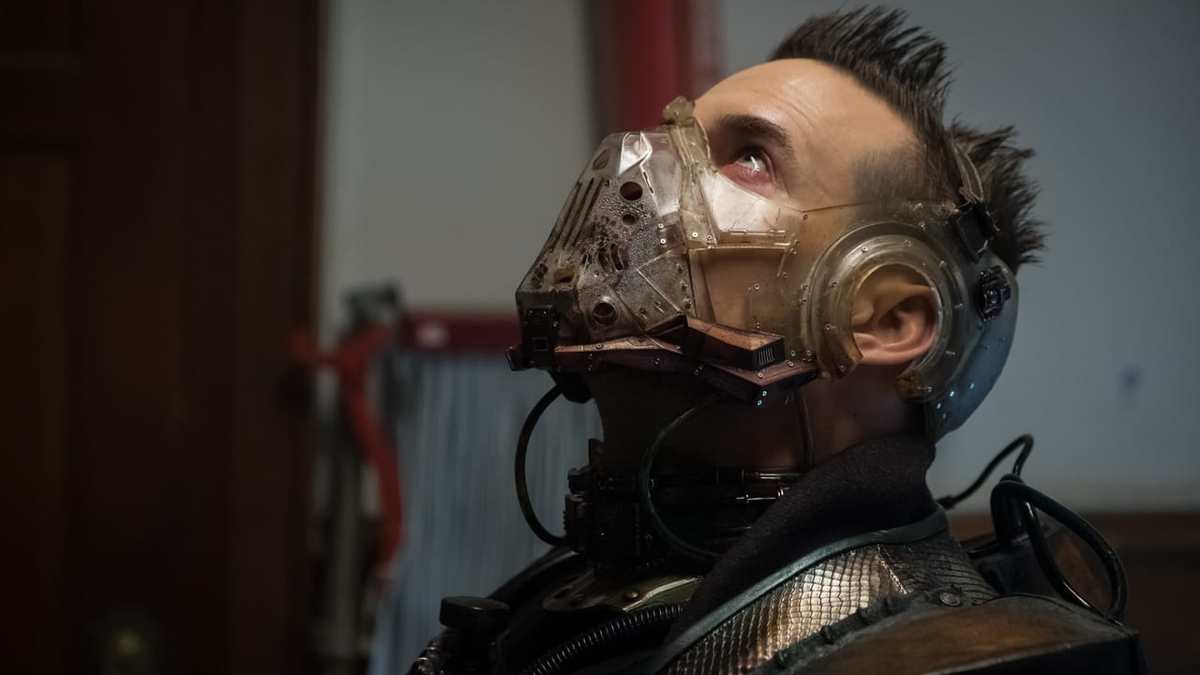 After a few lackluster installments and a week’s hiatus, Gotham returns with what may be its most Gotham-esque episode in a very long time. And if you’re watching the show as I’ve suggested—which means you don’t really expect it to be good as long as it’s entertaining—then that’s a step in the right direction.

“I Am Bane” is an action-packed hour filled with all the stuff we’ve come to expect from Gotham—crazy stunts, cheesy dialogue, lots of gunfire, and at least one good explosion (and that’s not counting all the bombs that are dropped on the city at the end). In a final season that started strong but has struggled recently, this is truly a gloriously stupid hour of television. And for Gotham, that’s high praise indeed.

First, we see the transformation of Eduardo Dorrance into Bane (is there anything Dr. Strange can’t do?), whose sole purpose in life is now to be the human (superhuman?) wrecking ball used by Theresa Walker to destroy Gotham City. The big reveal is that Walker is actually the daughter of Ra’s al Ghul (although, in retrospect, if you’ve seen The Dark Knight Rises, it really shouldn’t have been that hard to see this one coming). It’s not the most original thing the show’s ever done, and, frankly, it’s not the most interesting approach the writers could have taken. But it works pretty well, and at least now we finally have an endgame for Gotham besides “Batman just shows up for some reason and fights every obscure DC Comics character we can think of in an over-the-top-rope battle royal.” Which, now that I think of it, wouldn’t be half bad…

But all of that pales in comparison to the hilarity that ensues when Barbara goes into labor while also trying to keep Ed and Oswald from leaving the city without her. First, using the oxygen tanks as explosive devices is cartoonishly funny in a Wile E. Coyote sort of way. But the best moment of the night is watching Barbara, in labor, in a wheelchair, with a gun in each hand, screaming her head off and shooting anything in sight. As annoying and unnecessary as the entire Barbara/Jim pregnancy storyline has been, pregnant Barbara on a shooting spree makes it all worthwhile.

Because, of course, the rest of it’s completely absurd. Think about it—Jim has a one-time fling with his ex-girlfriend from season one—who’s proven herself to be a murderous psychopath on more than one occasion— and gets her pregnant. He then ends up marrying his other ex-girlfriend from seasons two and three (I think), who also happens to be a doctor and offers to deliver, and even help raise, her husband’s baby with Girlfriend Number One. Oh, and did I mention that Girlfriend Number One has tried to kill the wife at least once? Even the daytime soap opera writers are looking at this and thinking, “Wow–their stories make no sense.”

But this is Gotham—the land of the free and the home of the batshit crazy. Just two episodes left…here’s hoping for more of the same.