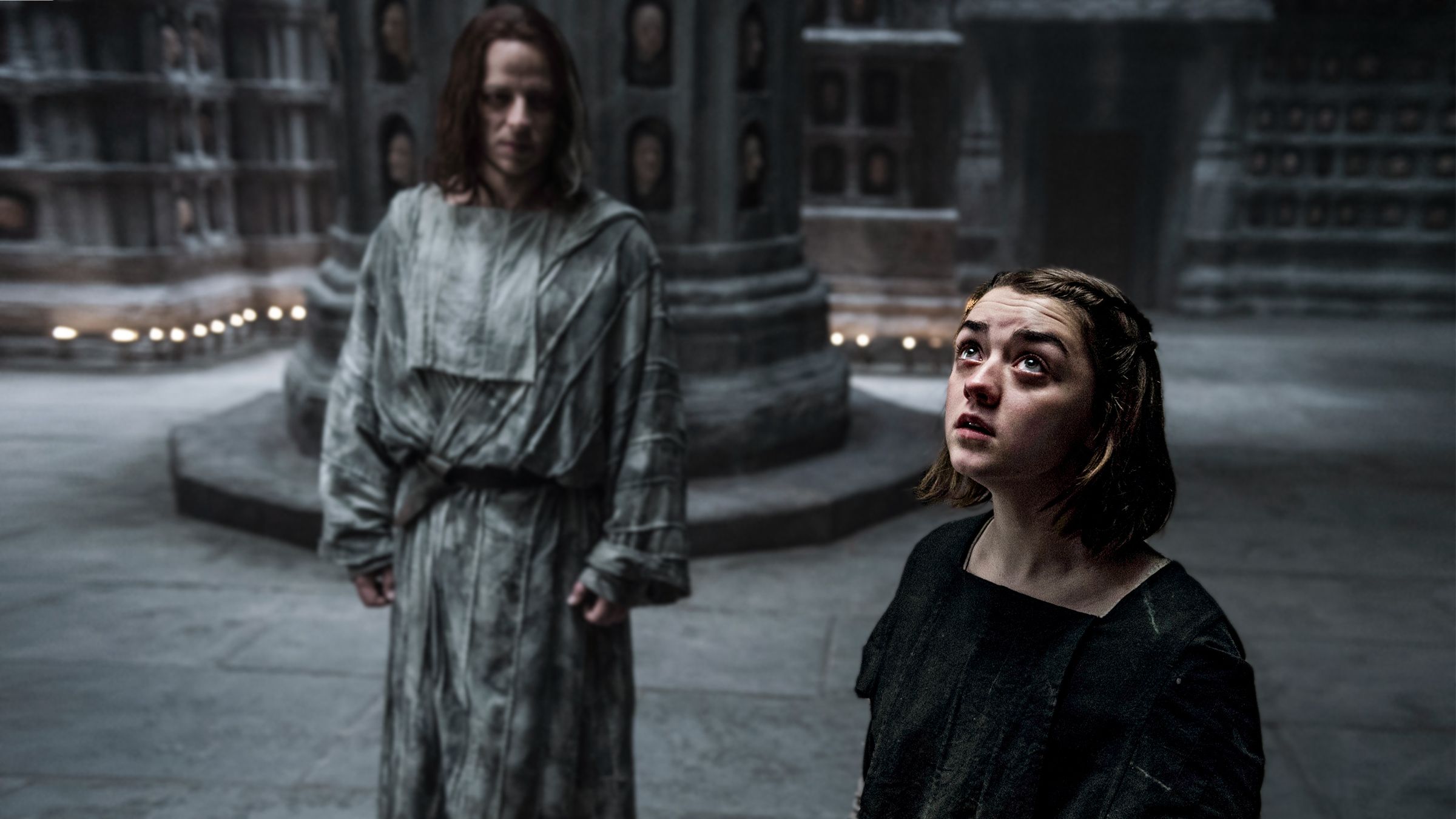 Guys, we’ve all been there. You drive all the way to a comic-con or you spend weeks browsing the web and you finally find that rare item you’ve been looking for. But then, right before you make the purchase, you’re stuck arguing with the seller about the authenticity of dwarf penises. Well that’s what happened on Game of Thrones this week. End of recap. Okay, there is a bit more story to cover. But this episode, “Unbowed, Unbent, Unbroken,” is the kind of chapter that reminds us of why Game of Thrones is the most volatile show on our DVR at the moment. Not much goes right for our characters this week. And for some, life just plain sucks. Here’s our recap.

We’ll start in Braavos where the happiest moment in the episode has Arya mercy killing a child. (Yeah, it is that kind of episode.) Before that, Arya is continuing to grow impatient with her daily routine of sweeping floors and washing corpses. She finds out through Waif that she needs to learn how to lie if she wants to play the game of faces. At night Jaqen comes to test Arya. She tells her story with several lies mixed in. Jaqen can see through them and whips her each time she lies. She actually thought some of the lies were true. Most glaringly was that she hated The Hound. But we know they were homies. Other lies include “I’m gluten free” and “I hit the gym at least 5 times a week.” Or maybe those were from my Twitter feed. But I detected their inaccuracy with my Jaqen-like wit! Anyway, a man comes to the House of Black and White with his ill daughter hoping to give her a merciful death. Arya tells the girl that she, herself, was healed after drinking the water from the well. But that was a lie! The girl dies! And now my recap rhymes! Jaqen sees the exchange play out and shows Arya the secret chamber under the house. It’s a huge room with walls filled with the faces of those who have died there. So it’s a face wall… But I’m going to assume there is a book involved somewhere so I can call it Arya’s Facebook wall. Jaqen tells Arya that she’s “not ready to become no one, but she is ready to become someone else.” So wearing corpse faces, serial killer style? Is that how it’s done? Cool? Only on Game of Thrones.

In Dorne, Myrcella and her betrothed, Trystane, continue to wander aimlessly through the gardens and talk about getting married. They’re Romeo and Juliet, we get it. But they’re also a bit boring in the grand scheme of things. Disguised as Dornish guards, Jaime and Bronn find Myrcella. She doesn’t want to leave and things escalate rather quickly. Bronn decks Trystane. Then the Sand Snakes show up to kidnap Myrcella. They fight Jaime and Bronn, but they cancel each other out until Areo Hotah and a bunch of guards show up. Everyone there gets arrested. Ellaria Sand does too since she planned the whole thing.

Game of Thrones is always a visually impressive show, but the landscapes in the Ser Jorah and Tyrion storyline have been incredible these past two weeks. In terms of story, things go from bad to worse. Tyrion, Jorah, and his scaly wrist are chitchatting. Tyrion tells of how he killed his father. Then he breaks the news that Jorah’s father, Lord Commander Mormont, is also dead. How could this day get any worse, you ask? Well, they could get captured by slavers. …and they’re captured. Tyrion talks his way out of being killed when the slavers reveal they want to sell his manhood because, pardon my French, “a dwarf’s cock has magic powers.” Tyrion insists it still needs to be attached to the dwarf to prove its authenticity. He then talks up Ser Jorah’s battle credentials in order to get the slavers to bring them to Meereen to fight in the fighting pits. The plan appears to work. So the most round about road trip ever seems to still be on course somehow.

Frustration is plentiful in King’s Landing. Little Finger is back and is immediately accosted by Lancel. The Sparrows have peeved a lot of people, but messing with Little Finger’s brothels and substantial income might have been a mistake. At least I hope so because the Sparrows are getting very annoying. Baelish meets with Cersei and questions allowing Ser Loras to be arrested. He even throws in a dig subtly pointing out her relationship with Jaime. Little Finger then goes on to claim that he is still loyal to the King before spilling the beans on Sansa’s engagement to Ramsay Bolton. Cersei starts waxing poetic about how she’s going to murder and skin people and stuff. But then we find out why Little Finger is playing both sides of this battle. In return for marching the Vale against the winner of the Stannis – Roose Bolton battle royale, he would like to be named the Warden of the North. He’s obviously lying to someone. But whether it’s Cersei, Sansa, or Roose Bolton, we’re not sure yet.

Across town, things aren’t going so great for the Tyrells. Lady Olenna shows up to secure Loras’ release. She confronts Cersei at a meeting where the Queen regent won’t give her the time of day. If you recall, there was a very similar scene a few seasons back where Tywin did the same thing to the Queen of Thornes. That meeting ended with a mutual agreement, since they were both reasonable people to an extent. Not this time because Cersei is a crazy person, whose main skill is raising her eyebrows and staring at walls to avoid eye contact. Maybe she isn’t completely crazy, but she sure doesn’t think about strategy and alliances the same way her father did. At the hearing, Loras and Margaery deny that Loras is a homosexual. But when Olyvar is called in as a witness, he reveals the truth. He uses Loras’ birthmark as proof that they’ve been together. I don’t see how this benefits Olyvar. Shouldn’t he get arrested too? The High Sparrow rules that there is enough proof to hold a full trial. He arrests Loras and also Margaery for lying. Aww hell no! Tommen is going to do something about this. He’s not going to let them! He’s going to… look around awkwardly and do absolutely nothing. For about five seconds I wished Joffrey were still alive. Then I smacked myself in the face and changed my mind.

Winter is Coming Down the Aisle

In Winterfell, we have a wedding. Someone send a raven to the casket maker. He’s going to need to work through the night. But actually, no one dies. Well, except for a little piece of all of us as Sansa is married to Ramsay. The build up to the event has Myranda trying to scare Sansa about Ramsay being a murderous loon. Then Reek has to walk Sansa down the aisle. Afterwards, they go to the bedroom. Ramsay insists that Reek stay and watch. As Ramsay forces himself on Sansa and rapes her, we see a close-up of the horror on Reek’s face. I was sure this was going to be the moment we saw Theon again as he redeemed himself saving Sansa. But no, nothing like that happens. Cut to black.

So we are left to contemplate next week’s Game of Thrones by remembering the various frustrations and horrors that play out in this episode. But we do still have some hope left. Winter is coming and with it there are four more episodes in season five. See you all next week!