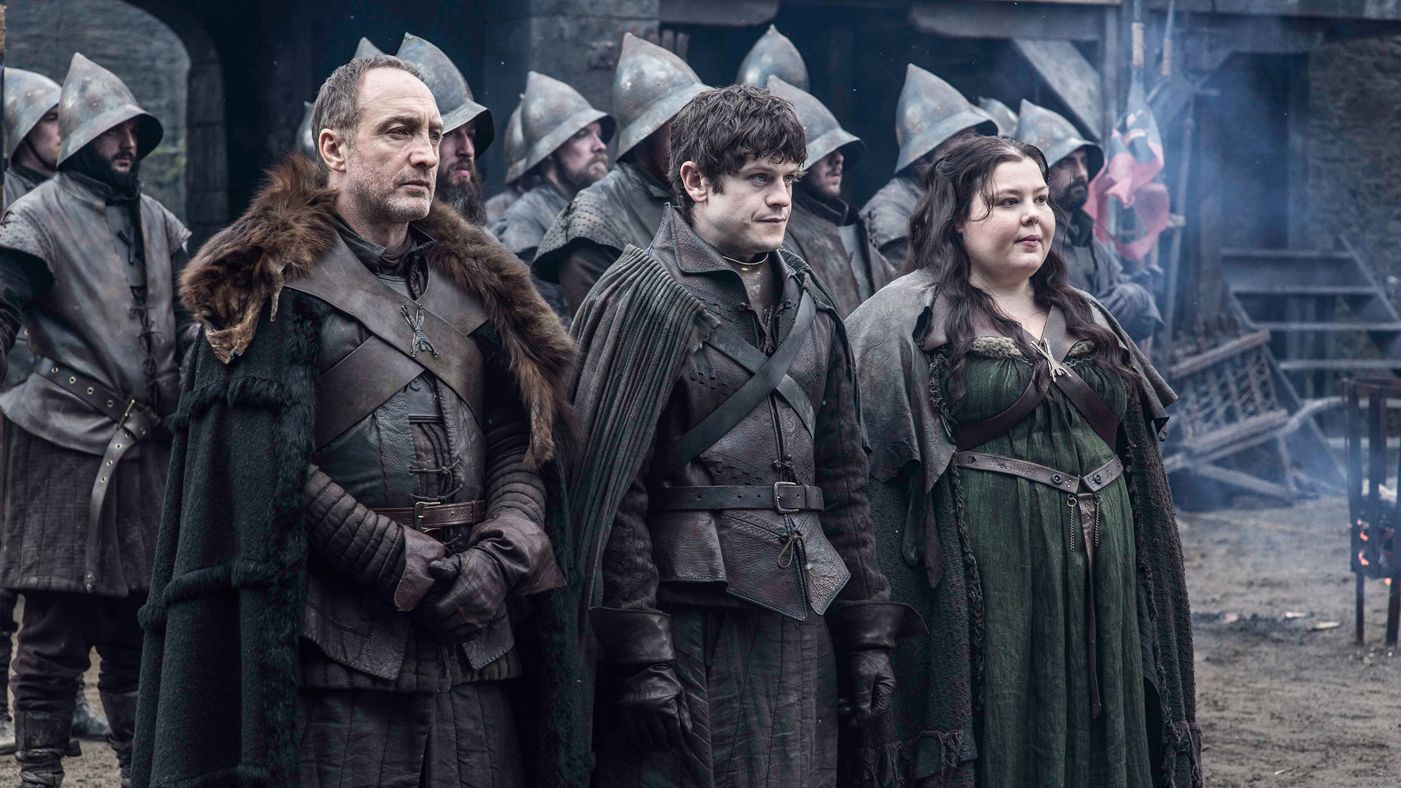 This season on “The Westeros Bachelor,” we’re trying to find the perfect match for Ramsay Bolton. He’s a Pisces from the Dreadfort with lots of fun interests. He enjoys hunting humans, flaying his enemies alive and eating with his mouth open. Now, let’s meet his ladies. First, we have Myranda, who is a psychopath that gets very jealous when Ramsay is with other women. Second, we have some flayed corpses that didn’t want to pay their taxes so Ramsay overacted as only Ramsay does. Lastly, our newest contestant is Sansa Stark. She recently dyed her hair because she thought it made her look edgy, and she has great experience being engaged to “munstas,” as she says it. Stay tuned to Game of Thrones to find out who will win the contest to be Ramsay’s wife. Meanwhile, here’s your Game of Thrones S5 E3 Recap of “High Sparrow.”

The North Remembers (As Brienne and Pod Remember Other Stuff)

We’ll start out in the North, where all this madness mentioned above is happening. Little Finger’s plan that has been taking shape these past few weeks, is to wed Sansa to Ramsay. Sansa is obviously peeved about this idea. Roose Bolton was the red wedding planner after all. But she decides she’ll do it after Baelish tells her to use the situation to enact revenge for her dead family. Roose tells Ramsay they have to tone down the flaying for a bit since they don’t have enough men to defeat the North if they rise up against them. Our old buddy Reek is listening in on this, but who knows what he’s thinking these days? Sansa hasn’t noticed the artist formerly known as Theon yet. I imagine that will be a weird exchange when they do interact. Later, Little Finger and Roose discuss their plan and the possible consequences when the Lannisters find out. To paraphrase Little Finger, “I ain’t afraid no Lannisters” sung in the melody of the “Ghostbusters” theme song.

Following not too far behind, Brienne and Podrick are bonding over a campfire. It turns out Podrick was assigned to be Tyrion’s squire after his original knight was hung for stealing a ham. Brienne then reveals that she wanted to serve Renly Baratheon because at a ball when she was young, he was the only boy who was nice to her. She then vows revenge on Stannis again. How many times do you think we’ve heard Brienne say the words “a shadow with the face of Stannis Baratheon?” I’m thinking that number is in the triple digits by now. When looking at the takeaways, this scene wasn’t terribly important. But let’s put our hands together for some good character development dialogue. (Tom claps enthusiastically.)

Up at Castle Black, Lord Commander Jon Freakin’ Snow is handling bidness. First he turns down Stannis’ offer to become Jon Stark and rule the North. He has sworn a vow to the Night’s Watch and blah blah blah. Davos then tries to convince Jon that the best way for the Night’s Watch to defend the realm would be to help Stannis take the North from the Boltons. Later, Jon holds a meeting in the dining hall to discuss some affairs. After it looks like he may assign Alliser Thorne to manage digging the new latrine, he instead appoints him First Ranger. He then assigns Janos Slynt to go and command Greyguard, a derelict fort located down the Wall. After he refuses, Jon orders he be taken outside. Jon, looking very Ned-like, beheads old Janos even though he begs for mercy. Okay, we’re getting pretty repetitive here. Throughout the show, how many people with newfound authority have beheaded people for insubordination? Off the top of my head (pun intended), we have Joffrey, Robb and Daenerys even did it last week. Obviously this is the first test for Leading in Westeros 101. Looking at Jon from a distance, Stannis nods in approval. 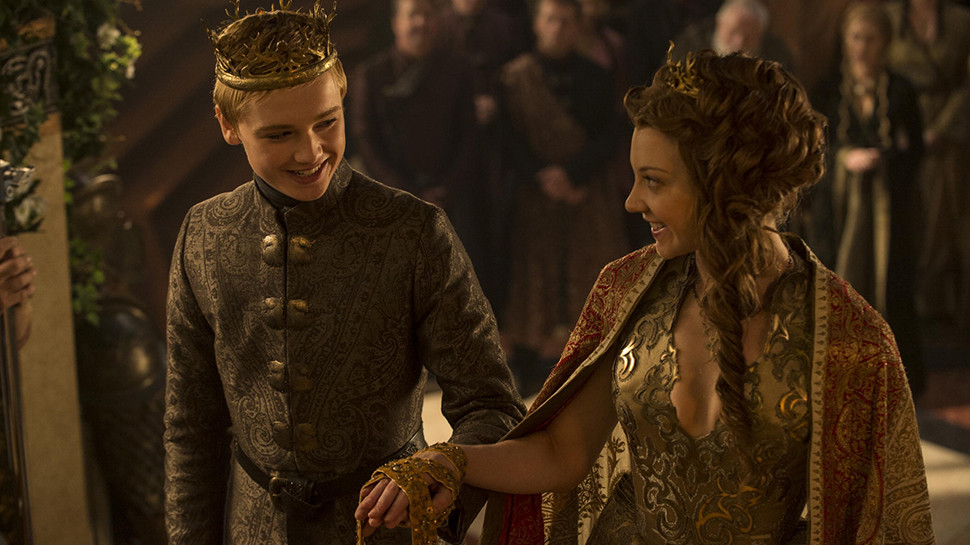 A Wedding and A Sparrow

Down in King’s Landing, I was bracing for the worst. It’s the most tragic sound in the Seven Kingdoms, a sign of impending doom. Wedding Bells! Tommen and Margaery tie the knot. But it actually turns out to be a happy occasion. Unless you’re Cersei whose stink-eye reeks of disappointment and wine farts. Tommen and Margaery do the deed that night. The age ambiguity of the characters makes this scene potentially very creepy to watch. After some subtle implying on Margaery’s part, Tommen tells Cersei that she should return to Casterly Rock if it will make her happy. But she doesn’t want to.

A more exciting part of the King’s Landing storyline is the new cult in town. The Sparrows are cleaning up the city. Lancel, who is all of a sudden pretty bad ass, leads a group into a brothel to root out the High Septon, who was in there… sinning. Then they parade him naked through the streets in the weakest parade I’ve ever seen. The Septon later goes to the small council to ask for revenge on the cult. Instead, Cersei goes to meet the High Sparrow and the two get off to a friendly start. The High Septon, you ask? He’s in prison now. We also get to see a short tease of what Qyburn has been up to in his evil lab. While writing a letter for Cersei, we see a body under a sheet twitch. Is he really building a Frankenstein version of Gregor Clegane? A Franken-Mountain, if you will?

Across the Narrow Sea in Braavos, Arya is now inside the House of Black and White. So far, my impression is that its just like a school… if a school never gave you any directions and you had no idea what you were doing the whole time. So let’s sum up the confusing things that have happened so far. Jaqen gave a guy water. That guy is now dead. Arya is sweeping the same room for days. (How is it still dirty?) Another girl there, Waif, doesn’t like Arya. One moment that does make sense has Jaqen questioning how Arya can claim to be no one, which the Faceless Men do, when she is surrounded by Arya Stark’s possessions. So, she goes outside and gets rid of all her stuff by throwing it in the water. But she can’t bring herself to lose Needle forever. So she hides it in a pile of rocks. Now back to the confusing lessons as Arya and Waif wash a corpse really slowly.

Tyrion Pees Off a Bridge and Is Also Abducted

Elsewhere, Tyrion, Varys and their box arrive in Volantis. Tyrion, who is experiencing some cabin fever after being stuck in various boxes since the end of season 4, insists on getting out for some fresh air. We get a cool look at the city before Tyrion stops to listen to a red priestess, who claims Daenerys is the “savior.” In a brothel, there is a prostitute dressed up like Dany that is quite popular. They also have a bearded lady Khal Drogo and Elsa from Frozen. The last two aren’t true, but imagine what a weird twist that would be. So, Tyrion tries to talk to a prostitute, but finds he can’t bring himself to get it on with her. He goes outside to pee off a bridge, as one does, but wouldn’t you know it? Our old pal Jorah Mormont is there. He kidnaps Tyrion saying he is going to bring him to the queen. End scene! But which queen does he mean? Is he looking to win back some favor from Daenerys or get the reward from Cersei? I just don’t know!

This episode of Game of Thrones didn’t have any battles or dragons, but it actually had a ton of interesting dialogue. We learned a lot about the characters as storylines continue to come together. I can’t believe it, but there was also a wedding with no subsequent murdering. We’re 30% into the season and Game of Thrones 5.0 is definitely building toward some interesting stuff.