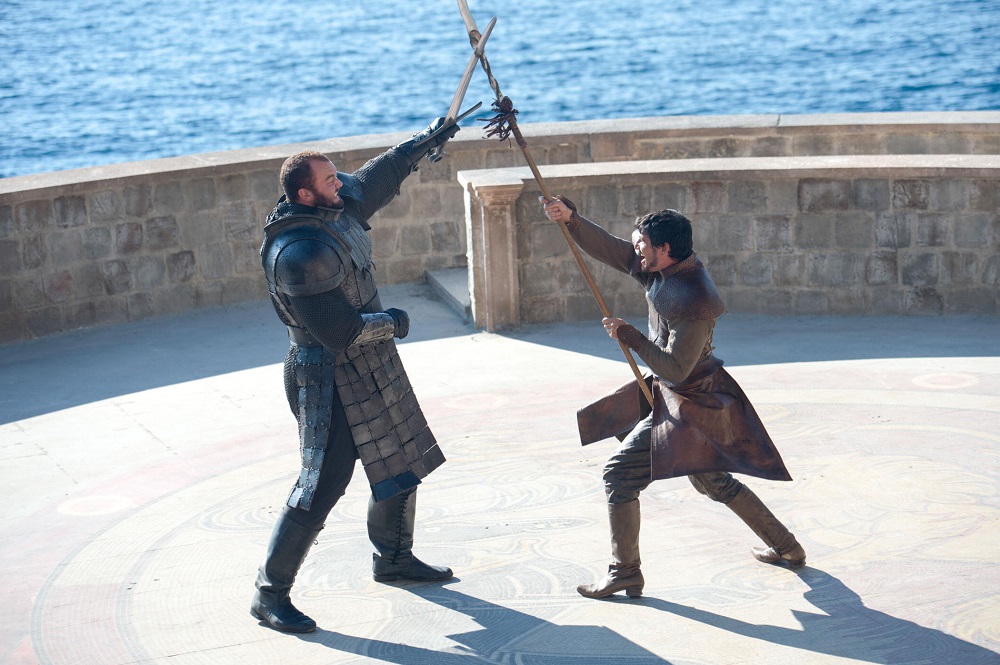 Hello there, everyone. How are you doing? If you are like me, and watched this week’s episode of Game of Thrones, you are probably experiencing intense sadness while asking yourself “why?” over and over again. The episode is titled “The Disappointment and the Depression.” Oh no, it was actually “The Mountain and the Viper.” We’ll get to the titular battle in a bit. I have some issues with it. But first there were some other moments of cheeriness on this week’s episode of “Game of Fun.” 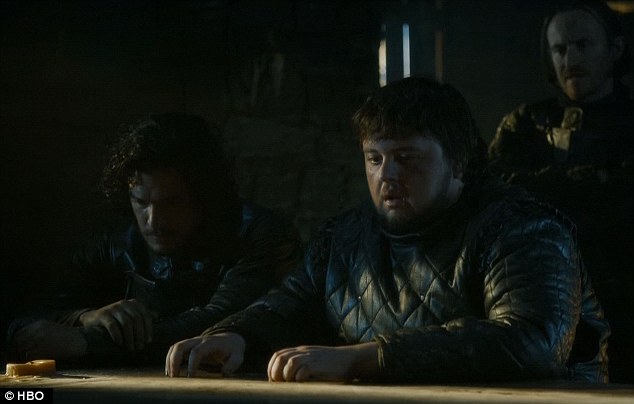 Up near the Wall, Gilly is working in Mole’s Town. If you’re not familiar with Mole’s Town, “you will never find a more wretched hive of scum and villainy.” After arguing with one of the more homely prostitutes, Gilly hears a wildling signal and runs to hide. Sure enough the wildlings are there and they’re fixing for some murderin’. Tormund Giantsbane and Styr lead the charge with Ygritte acting especially lethal this week. She finds Gilly hiding with her baby and spares them. After all she’s a wildling, not an animal. Up at Castle Black, Sam is all whiny because he assumes his gal friend was murdered in the attack. Jon, Sam and the others anticipate the coming battle with Mance Rayder’s armies and how they’re quite outnumbered. The preview for next week’s episode confirms that it’s about to go down. So hike up your warfare britches. (Do people have specific britches for war?)

Last season I repeatedly mentioned not caring about Theon Greyjoy getting tortured. Well I wish we had that storyline back because “Reek” is a giant pain in the arse. This week he “pretends” to be Theon and gains the trust of the iron born occupying Moat Cailin. He says they can go home but sure enough Ramsay Snow, who wasn’t hugged enough as a child, comes in and flays the occupants. Roose Bolton rewards Ramsay by changing his last name to Bolton. Reek’s reward? He gets to bathe Ramsay. I don’t know who comes out worse in this deal, the bather or the bathee. Both angles seem quite creepy.

Hey remember last week when Little Finger pushed Lysa Arryn through the moon door like he was playing NBA Jam on Super Nintendo? Or more accurately, it was a weak little shove that would only be effective on a frail weirdo like Lysa. But either way, she’s dead and the important people at the Eyrie don’t believe Little Finger’s story that she committed suicide. For a guy who is so careful all the time, this was pretty reckless. But don’t worry. Here comes Sansa, who for some crazy reason has finally developed some courage and uses it to corroborate Baelish’s story. Baelish then uses his new found influence as Lysa’s widower to proclaim it time for Robin, the Lord of the Vale, to get out of the castle and see the world. In the meantime, Sansa keeps grinning at Baelish. I fear she has come to fancy him and they gon’ do it at some point.

Meanwhile, the Hound has arrived at the Eyrie to ransom Arya to her aunt, Lysa. But of course she’s dead. All Arya can do when hearing this news is laugh. Did her laugh remind anyone else of Moaning Myrtle from Harry Potter? Maybe that was just me.

Over in Meereen things are getting a bit crazy. The slowly developing romance between Grey Worm and Missandei takes the next step. Grey Worm gawks at naked Missandei while everyone is bathing in a river. At least that’s the next step in “Game of Thrones” romance. They both feel awkward about it afterward, but ultimately they imply they like each other… kind of. But forget all that. Something more important is happening. Ser Barristan receives a letter with the seal of the Hand of the King. Now I know what you’re thinking. I bet this is really good news! Well, it isn’t. It’s Ser Jorah’s royal pardon from King Robert Baratheon in return for spying on Daenerys. That was a long time ago and he has since committed himself to the Khaleesi. But she isn’t hearing any of it. The Dany-Jorah dynamic duo that we’ve had since season one is split up when the queen sends her confidant away. He leaves and I cry a little. Well I better dry my eyes because things are about to go down in King’s Landing. 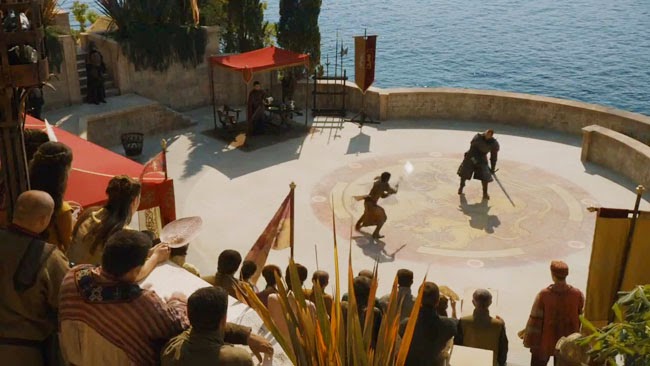 We open with Tyrion having a conversation with Jaime before the big trial by combat. It’s a really authentic exchange between the brothers. Tyrion reminisces about their simple cousin who would constantly smash beetles. There’s a metaphor here. We’ll revisit that in a moment bacause it’s time for the fight! Prince Oberyn is relaxed and ready. The Mountain is humongous and reminds me of a human Shrek. After some introduction we get going and the Viper is as awesome as ever. He’s jawing with the Mountain, taking a few minor shots, but landing quite a few of his own. However, the Viper is less concerned with the fight than getting the Mountain to admit to raping and killing his sister years ago. So after Oberyn lands a fatal blow, the Mountain is dying, but that pesky Dornishman keeps prodding him to confess. At this point I’m on my knees in front of my TV begging him to finish the fight. But we’re on season four now. That is not what happens on this show. The Mountain trips Oberyn, pins him to the ground and confesses to the murder while gouging out Oberyn’s eyes and eventually popping his head like a balloon. The Mountain collapses afterward, but who really cares about that. The Red Viper has gone the Ned Stark route and is dead. Not even pausing to take in the scene, Tywin sentences Tyrion to death.

This, like the Red Wedding last year, is one of those events that makes “Game of Thrones” not fun for me. People die on the show, I get that, but the way it’s done seems more appropriate for a “How to be a sociopath” infomercial than entertaining television. But alas, here we have a character introduced in season four, given significant screen time and then offed after only having the slightest impact on the story. Also, what was with the beetle memory? Oberyn’s head was smashed in. One theory circulating on the internet is that the story signifies author George RR Martin repeatedly killing his characters and we can’t help but watch like Tyrion watching his cousin. It makes sense. To fit better in the context of the story, maybe the beetles lining up to be killed represent the brutal nature of life in Westeros. Either way I’m incredibly bummed out the Viper is dead. He was like Tyrion in season two, giving us viewers some hope as the miserable developments pile up elsewhere.

But with his death my unlikely hope that we somehow get a spinoff centered on the dead characters chilling in the afterlife grows. I can see it now. Ned and Robert Baratheon take on Oberyn and Renly Baratheon in a game of Pictionary. Maester Luwin sits in the background rolling his eyes. In the other room Khal Drogo gives Joffrey a swirly. End scene.

New Draft of Hitchhiker’s Guide Novel to be Released