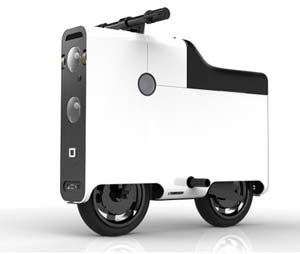 John Smith glanced down at his tickets and then back up at the masses of people surrounding him. Even if he ran, the odds of making it to his flight were slim. But he absolutely could not afford to miss it. He had a business meeting to reach, and his absence could prove catastrophic. If only there was a way….

The starter is just a rotary switch on the handlebar, and similarly to a bicycle, there’s a brake handle there as well. The wheels are fixed in place to help with stability, though judging by the image above, stability seems the third thing I would question, preceded only by comfort and safety.

Just imagine the sheer exhilaration of scooting around in airports being pursued by TSA or overhearing the confused exclamations of tourists as they explain how positive they were that some maniac had rocketed into them while riding a suitcase.

Entertainment value aside, the motorized suitcase strikes me as practical-ish. At first glance, it seems like an ingenious, creative, and fun idea. No more dragging a heavy trunk along behind you! On the flip side, however, is a scootcase really light enough to skip baggage claim? It seems like it would have to be checked anyway, negating the entertainment value of zipping around the terminal like a four-year-old with a model jet plane. I suppose you could ride it to and from the airport, but that scootcase looks even more treacherous than a Smart car, and that’s saying a lot.

Well, now I kind of want to see a scootcase versus a Smart car. Mortal Kombat, get on it.

The scootcase hasn’t taken off yet, at least, not in the United States. But if our culture can turn rubber bands shaped like animals into a market phenomenon, why can’t we do the same with a scootcase? There are a trunk full of possibilities. Suitcase racing, anyone? Or maybe we can start motorizing other objects, like guitar cases or beanbag chairs. How cool would a motorized beanbag chair be?

Returning to John Smith, the man managed to make his flight thanks to the motorized suitcase. He sat in the front half of Oceanic Flight 815, grateful to He Liang for inventing the device that allowed him to make his appointment.

Motorized suitcases – revolutionizing airport travel in a creative, though unsafe, manner. Although I am wary of them at the moment, if they do take off, and if their safety standards were improved, and if we still haven’t invented teleportation, then I’ll consider buying one.