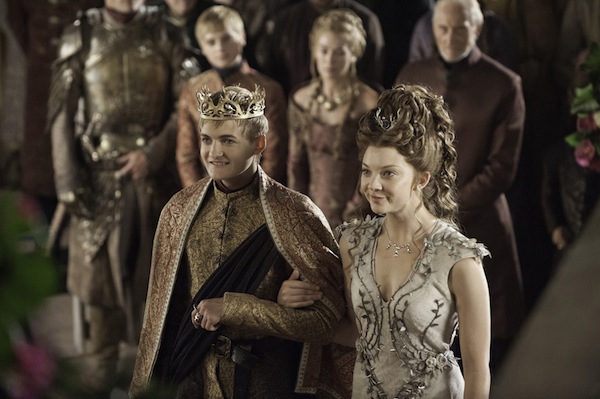 Have you ever wanted something to happen so badly but then you were ultimately left unfulfilled when it finally did? That’s me with the end result of this week’s episode of “Game of Thrones,” titled “The Lion and the Rose.” Spoilers are on the way if you haven’t watched yet. It’s a classic whodunit, but with a “Game of Thrones” twist. King Joffrey Barath-ister, wielder of crossbows, poster child for spoiled brats and quite possibly the least likable character in the history of entertainment is dead. Like actually dead. (But what is dead may never die.) Yeah, but he truly seems to be dead. (But the Lannister’s always pay their debts.) True, but that won’t bring Joffrey back. (Winter is coming.) Okay now, you’re just spouting house catchphrases. Enough talking to myself, let’s get to the recap. (Growing strong.) Nice try House Tyrell.

The Hunger Game of Thrones

This week kept things to a few storylines, which makes it less frantic than the previous episode. We’ll begin with the only arc nobody at all was wondering about in the off season. Near the Dreadfort, Ramsay Snow is playing “The Hunger Games” with a young woman in the woods. He kills her, we hate him. Done and done. Theon, now known as Reek, follows along doing nothing. So he’s basically Peeta in this game. When Roose Bolton, Ramsey’s father, comes back, he’s mad about the whole sausage cutting incident. He had hoped to trade Theon for Moat Cailin, which the Greyjoys currently hold. But now he’s a weird hobbling, messed up guy so the Greyjoys won’t want him back. Bolton sends Locke (dude who cut off Jaime’s hand) to find Bran and Rickon. He then sends Ramsay (and Reek) to go take Moat Cailin.

North of the Wall we get our first look at Bran this season. He’s still doing his warg thing looking through the eyes of animals. It’s a pretty simple scene scene with Jojen and Meera advising Bran. Hodor’s also there. Man have I missed Hodor. While visiting a Heart Tree, Bran has a vision telling him to keep going north, but among his visions he sees the shadow of a dragon flying over King’s Landing. Awesome! Way more awesome than the scenes that actually involve Bran, but still.

Also introduced for the first time this season are Stannis and company. Melisandre is burning people alive, naturally as one does in Westeros. She then goes and talks to Stannis’ daughter about why she should believe in the Lord of Light. Remember when Stannis was cool and involved in battles? Now he just sulks around like he’s Daenerys in the desert. Speaking of Daenerys, she got the week off. It would seem she needed a bit more time to bury the dead slaves we saw last week.

Now to King’s Landing. Or should we say, Dead King’s Landing? *Ba-dum-tshh*But before we get to that, a lot of other stuff happens there. Tyrion and Jaime are reunited. Tyrion shows his handless bro some support and offers up Bronn to help him train in secret to strengthen his left hand. The training session goes off without a hitch, except for the fact that Jaime really stinks. Like Hodor in a spelling bee level stinks. After Tyrion finds out from everyone’s favorite eunuch, Varys, that Shae’s presence has been discovered, he lies about his feelings toward her and has Bronn put her on a ship to leave the city. Is this a rare example of a “Game of Thrones” character leaving the show by a way other than gruesome death? Quite possibly.

After Joffrey gets a bunch of wedding gifts and reacts like Dudley Dursley, he does in fact get married to Margaery Tyrell. But weddings tend not to go well in Westeros these days. The reception features a number of tension filled encounters with characters we have rarely seen together. Tywin and Lady Olenna lead the list talking about money, debts and such. Loras and Jaime get into it about Loras’ pending marriage to Cersei. We already know both of their stances on romance. Cersei confronts Brienne and accuses her of flip-flopping sides and loving Jaime. Then later Prince Oberyn (Dornish prince, shady character and overall bad ass) confronts Tywin and Cersei. They go back and forth, but Oberyn is going to boil over at some point and I cannot wait to see it.

Joffrey, living his final minutes as the insufferable ass he has been for 3+ seasons, introduces some entertainment consisting of dwarves representing the five kings fighting each other. Tyrion is understandably peeved, Sansa is understandably peeved and I am throwing darts at a Joffrey shaped dart board. (I don’t actually have one, but I wouldn’t complain if someone made me one.) Joffrey and Tyrion go back and forth for a bit with veiled insults before Joffrey pours wine over Tyrion’s head and makes his uncle act as his cup bearer. At this point, I was questioning why we have to spend so much time watching this frustrating spectacle. But trust me, hang in there.

Margery distracts Joffrey by calling for the big wedding pie. Naturally Joffrey thinks the best course of action would be to hack at it with his sword. Turns out it was full of doves, some of which are dead now. Even the birds aren’t safe in “Game of Thrones.” After eating a few bites, our countless hope-filled “GOT” conversations become a reality. Joffrey begins choking, does his best Violet Beauregarde impression and dies. The weird way his face contorts implies poison. Joffrey kind of points to Tyrion at the end, so Cersei blames her brother for the poisoning. We couldn’t just have a happy ending for once could we? Now Tyrion is in trouble.

But whodunit? It probably wasn’t Tyrion, but after the ordeal, Sansa flees with Dontos. Could it have been one of them? What about Oberyn or a Tyrell? At this point I wouldn’t be surprised if it was the Icelandic rock band Sigur Rós, who made a cameo in the episode. Fans of the books probably already know, but no spoilers here people. I just hope we don’t have to wait too long to find out. For an episode with no Jon Snow, Arya or Daenerys it still was quite the spectacle. But just think, no more Joffrey! (But what is dead may never…) Oh would you shut it already!?