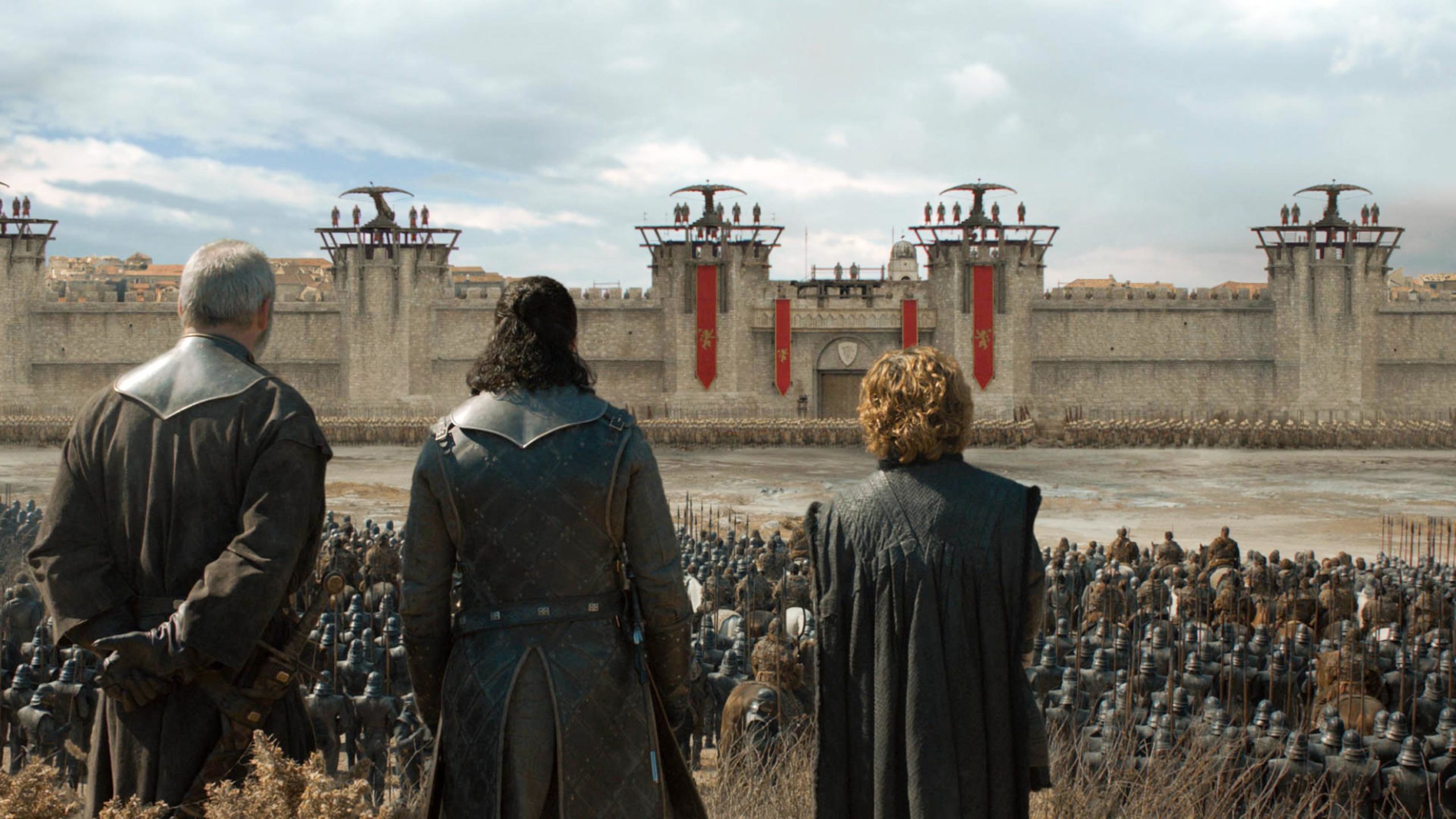 So it all went down. A bunch of main characters died brutally this week. The lines have become so murky, it’s impossible to tell who the good guys are now. Well either way, it’s tough to make the case that the woman who burnt an entire city alive is the hero. The siege of King’s Landing turned into a burning. The burning turned into a sacking and now Daenerys is apparently left to rule the ashes. Here’s our recap of the penultimate episode of Game of Thrones, “The Bells.”

The episode begins with Daenerys having a tough time on Dragonstone after the death of Missandei. Still no word on why Cersei let Dany and her small group walk away from the gates when she could have easily destroyed them last week. Varys is in the process of making preparations to reposition Jon as the king apparent since he believes Daenerys has gone and lost her mind. To be fair, he’s not wrong. When Jon arrives, he tells Varys the same line he’s been saying since day one. He doesn’t want the throne.

Tyrion decides to squash the spider with a newspaper. What I’m saying is, he rats out Varys to Daenerys. She expected Jon to betray her, but alas it’s the master of whisperers who is brought to the beach and executed via dragonfire. He’s been an intriguing character since season one, but he switched sides one too many times. Remember Varys saved Tyrion from execution years back. What a way to return the favor.

Jon attempts to reassure Daenerys he is still behind her. But she admits that he is loved while she is only feared. Jon says he loves her, but then he shuns her smooch. Daenerys knows how she needs to rule. “Let it be fear.” As the plans are laid for the attack on King’s Landing, Tyrion pleads with Daenerys to pull back if the bells ring signaling the city’s surrender. Yeah, yeah whatever, Tyrion. I’m definitely not going crazy as we speak with plans of barbecuing peasants.

Word arrives that Jaime was captured attempting to get into King’s Landing. Naturally Tyrion breaks him out. This time it’s in an attempt to get Cersei to surrender. Tyrion even set up an escape route for his siblings. Jaime and Tyrion say goodbye and this time it feels like it’s for real. Meanwhile Cersei’s people and King’s Landing are prepping for imminent attack. We see Arya and The Hound have made it into town. Apparently traffic wasn’t bad since so many characters made it from Winterfell in less than one episode.

Then without warning, Daenerys and Drogon descend from the sky and decimate the Iron Fleet. Euron jumps ship just in time. The solitary dragon easily dodges the scorpion bolts and has all the ships sinking to the bottom of Blackwater Bay within minutes. Why they had such trouble with the fleet last week, we’ll never know. The very angry queen then turns her attention to all of the scorpions on the city walls. As the Targaryen forces line up against the Golden Company at the city gates, Drogon bursts through the wall from inside the city and the 20,000 sellswords are no more. It sure didn’t seem like there were that many.

Cersei remains optimistic about the Lannister soldiers in the city defending her and the Red Keep. Jon and Grey Worm lead a force through the streets and are face to face with those same Lannister soldiers. They throw down their swords. Then after some tense moments, the bells ring signifying the Lannister surrender. Awesome Daenerys. You did it your way. You broke chains and now you broke the wheel. …She’s burning the whole city, isn’t she? The common folk too you say. She’s destroying the castle too I imagine. Well that’s just great. The writers really want us to call Daenerys the Mad Queen. So cool, she’s the Mad Queen.

As Jaime makes his way to a secret tunnel entrance for the Red Keep, Euron conveniently washes ashore. He and Jaime fight for no real reason other than they don’t like each other. Euron naturally tells Jaime about his hanky panky with Cersei just to key him up. The head boob of the Iron Islands is able to stab the Kingslayer a few times before Jaime puts an end to him. Euron is still dying as Jaime leaves. Euron seems okay with his imminent death knowing that the wounds he inflicted were fatal.

As the Red Keep’s walls come tumbling down, The Hound tells Arya to leave or she will get killed. He admits that the need for revenge has consumed his life. She needs to let it go or risk becoming him. She thanks him before running out. The Hound runs into the wreckage searching for the Mountain Who Rides. He’s with Cersei and Qyburn who are looking for a safe place to hide. When the Hound finds them on a staircase, Cersei and Qyburn command the Mountain to defend his Queen. He responds by palming Qyburn’s head like a basketball and slam dunking him into the wall. He is so very, very dead.

Cersei leaves to let the Clegane brothers duke it out once and for all. Ever since we saw an abbreviated sword fight in season one, we knew this was coming at some point. It doesn’t disappoint. Well if you’re a stickler for biological accuracy, you may have been disappointed. The Hound stabs his big brother a few times, but he just keeps coming. Gregor comes very close to repeating his Red Viper eye gouge/ head crush, but Sandor is able to get his own strike in.

He sticks a knife all the way through the Mountain’s head and it doesn’t slow him down. I guess organs aren’t really a thing for Frankenstein-like monsters. They’re both definitely going to die in this fight. So the Hound puts an end to it all by throwing them both off of the tower into a fiery abyss below. With Tormund back up North and the Hound dead, where’s our comic relief going to come from in the final episode? Nowhere, that’s where. Comedy is dead in Westeros.

As Daenerys’ carnage reaches all corners of King’s Landing, a disappointed Jon orders his forces to pull back. Arya attempts to help people in the streets, but has a hard time finding any kind of safety. She’s more fortunate than everyone around her though. We see lots of innocent people burnt up. Most of them are women and children. Again, we’re supposed to be really mad at Daenerys here. Arya finds a horse amongst the wreckage and rides off.

In the Red Keep, Jaime and Cersei reunite over the cracked and crumbling map of the Seven Kingdoms. How symbolic! He leads her down to the escape route, but all the exits are blocked by rubble. In a rare unguarded moment, Cersei tells her brother that she doesn’t want to die. Jaime realizes the end is coming and tells her to look at him. They are all that matter. One of the most controversial and flawed love stories throughout Game of Thrones ends with the walls literally falling down around them. The Lannister twins are crushed in each other’s arms.

To be honest, it may be better to be crushed under a castle than to be around to deal with whatever is brewing on next week’s grand finale. It appears Daenerys has finally won. She defeated Cersei at the expense of the people. Jon is disenchanted. Arya is not pleased and almost all of our characters are dead. Well we have one more episode to kill the rest of them. Or maybe there will be a happily ever after. I wouldn’t hold my breath for that one.