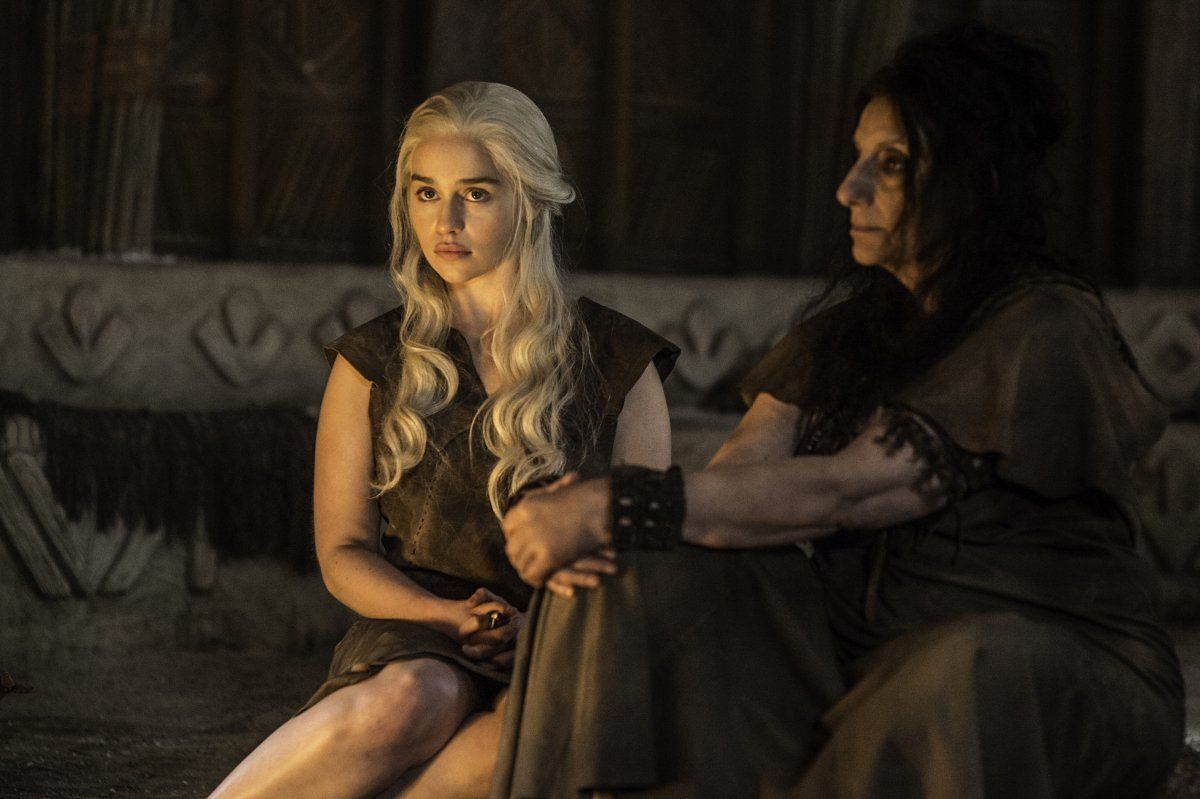 Let’s be honest. We’ve spent the early part of this season of Game of Thrones watching our interest in the Daenerys storyline dwindle. Well guess what, folks. She’s back! Episode four was titled “Book of the Stranger,” but it was all about the characters and the audience getting reacquainted with some familiar faces. Here’s our recap.

So Jon, who now has a man-bun, dramatically resigned from the Night’s Watch last week by storming off and muttering that his watch has ended. But he hasn’t actually left yet. So he’s just hanging around freezing because he gave Edd his cloak. It was a nice symbolic gesture, but put your coat on, Jon. You’ll catch your (second) death of cold. But as he’s packing up to leave, Sansa, Brienne, and Podrick show up. It’s a Stark reunion! Jon and Sansa reminisce about Winterfell and apologize for their childhood angst. She then casually transitions to asking her half-brother to start a war and retake Winterfell. That was really smooth, Sansa. Jon doesn’t want to fight anymore, but Sansa says she’ll do it without him if she has to. Across the grounds, Brienne confronts Davos and Melisandre. She tells them that she was the one who killed Stannis and even though he’s dead she doesn’t forgive them. Brienne! They’re good guys now. You obviously haven’t been watching this season of the show. Hurry up and binge it so we can move on. But the real highlight of the week is a potential romance between Tormund Giantsbane and Brienne of Tarth. Well more accurately, Tormund just stares at her and smiles creepily. She doesn’t seem into it. But what a match they would be.

Later, while everyone is eating a hearty suppah, (that’s how we say supper up north) a message arrives from Ramsay Bolton. This is the Game of Thrones version of telemarketers calling during dinner. Can’t the threatening messages wait until afterwards? The scroll orders Jon to hand over Sansa or face death in battle. Ramsay boasts of having Rickon too. The whole thing reads like an assignment from a serial killer poetry 101 class. Tormund admits that his Wildling forces aren’t big enough to match the Boltons. But Sansa believes Jon can rally some of the northern houses to their cause. We know of one army that will be joining the fray. Don’t we, Senor Pequeno Dedo?

I’m of course talking about Little Finger, who made his triumphant return to the show in the Vale this week. Yohn Royce is overseeing the training of the ever-useless Robyn Arryn. Royce accuses Little Finger of handing Sansa over to the Boltons, which he did. Little Finger accuses Royce of betraying him and leading to his capture by the Boltons, which he didn’t. But Robyn has apparently been brainwashed to believe Little Finger. So after he wonders if they should send Royce through the moon door, Royce backs down. Little Finger tells Robyn about Sansa escaping Winterfell and going to Castle Black. Robyn agrees that they should help her by sending the knights of the Vale to protect her.

The cog driving all this northern craziness is Ramsay, who has a short but impactful scene this week. We learn that Ramsay can flay a person with precision, but he can’t peel an apple very well. Osha is brought before him and asked why she was helping Rickon. She claims she was protecting him in order to sell him at some point. She then tries to seduce the new Lord Bolton while reaching for a knife across the table. But right as she’s about to make her move, Ramsay reveals that Theon told him all about how she helped Bran and Rickon escape. So he pulls out a different knife and stabs her in the throat. Osha! You finally came back to us and now you’ve gone the way of Shaggydog. How sad and disappointing.

The character formerly known as Reek has returned to the Iron Islands. Yara questions Theon’s return, assuming he came back once Baylon died to claim the throne as King of the Iron Islands. But I think his real goal is to just curl up in a bed and eat a pint of ice cream. He’s had a rough few years. Theon tells his sister he doesn’t want to be king and he will help her rule. We’re getting closer to the Kingsmoot. Is it king-smoot or kings-moot? Yeah, I did just spend two minutes saying Kingsmoot out loud to myself in weird accents. What of it?

It’s been a season and a half since we began dealing with the Faith Militant in King’s Landing. Can we just be done with them already!? Margaery meets with the High Sparrow, who warns her to avoid her life of extravagance and sin. He also tells his own story of how he gained a taste of fortune, but gave it up to serve the poor. Margaery is allowed to visit Loras, but the Knight of the Flowers is in bad shape. He keeps saying that he wants it to end. Margery tries to convince him to be tough, but it seems like she doesn’t get through to him.

Across town, Cersei meets with Tommen to discuss the High Sparrow. Tommen’s words match some advice he received from Grand Maester Pycelle. He should be careful provoking men like the High Sparrow. But Cersei isn’t having that. She tells her son the Faith Militant is dangerous because they have no respect for the King. Cersei and Jaime meet with Kevan Lannister and Lady Olenna Tyrell to do something about this situation behind the King’s back. The plan is to have the Tyrell army defeat the Sparrows before Margaery has to make her walk of shame. Tommen told Kevan to do nothing, but technically speaking he won’t be doing anything. It will be the Tyrells. Then once Maergery is back, Tommen probably won’t mind the details of how it happened. Both seem on board for the plan. Kevan is a bit reluctant, but he wants his son, Lancel, back. I imagine the siblings Lannister have an ulterior motive here. The plan will probably weaken House Tyrell somehow. Maybe they’re trying to take out two birds with one stone. Or more accurately would it be, some birds (Sparrows) and some flowers (the Tyrells) with one stone? That doesn’t have the same ring to it.

In Meereen, Grey Worm and Missandei are losing patience with Tyrion’s brand of politics. They meet with representatives of the other slave cities. Eagle-eyed viewers will even recognize two of these representatives from past seasons of Dany’s conquests. Tyrion’s plan is to allow the cities seven years to transition away from slavery. Masters who lose money will also be compensated. In return, they will cut off their funding of the Sons of the Harpy. As you would expect of any meeting of Tyrion’s, the representatives are welcomed with wine and ladies. We don’t hear an answer to the proposal in this episode, but Tyrion is already getting some feedback. A group of former slaves confront him about meeting with the Masters. After some dramatic pauses, Grey Worm and Missandei back him up and the freed slaves are appeased for now. Grey Worm warns Tyrion that the Masters will inevitable betray them. Well let’s hope the dragons are around when that day comes.

But for all Tyrion’s diplomacy, Dany is in Vaes Dothrak doing what she does best. Dramatically murder enemies and add new titles at the end of her name. Jorah and Daario arrive at the Dothraki city to save their queen. But before they go in, Daario sees Jorah’s greyscale. They only talk about it for a second. These bros sure aren’t going to talk about their feelings. In the city, they sneak around and are forced to kill two Dothraki. They find Daenerys, but she won’t leave with them because of the slim odds they would make it out of the city alive. She has a better idea.

All of the Khals are having a meeting in the temple. Dany is called in to have her fate decided. Some want to let her live out her days with the other Khal widows. Others want to do the usual Dothraki rape and murder thing. But as they debate, Daenerys begins to talk some smack. She’s getting into a groove, working the stage a bit. She’s walking around and then a trademark dramatic line. “Do you really think we would serve you?” “You’re not going to serve. You’re going to die.” She knocks over the fires in the room setting the temple ablaze. As the Khal’s run around looking for an exit, Daenerys breaks out in her own version of the Alicia Keys tune. “This Khal is on Fire!” (Or maybe that was me in my living room.) She emerges from the temple as the only survivor. She’s naked but unscathed. The Dothraki all kneel before her. Jorah and Daario follow suit, but Daario is visibly in awe. He hasn’t seen his queen’s abilities before. So it looks like Daenerys is a Khaleesi again. Maybe she’ll add “burner of Khals” to her list of titles.

This week’s episode finally saw Daenerys pull some of the spotlight away from Jon Snow. So as everything perpetually goes wrong for our other characters, remember that Daenerys will inevitably conquer some folks. It’s what she does. Elsewhere Ramsay did what he does, murders our happiness. Plus the incredibly long wait for some Starks to reconnect finally ended. At first glance it seemed like this was a small episode, but season 6 doesn’t seem to have small episodes.