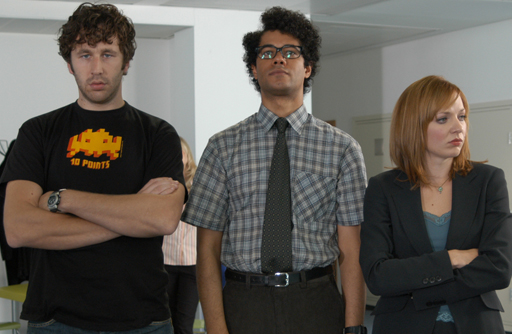 I will declare right off that this post is rife with spoilers, but to be honest if you still haven’t seen the final The IT Crowd episode, what have you been doing with your life? Go online now, find it, watch it right this second, and come back to me when you’re done. Don’t worry. I’ll wait. Seen it now? Good. Let us proceed. 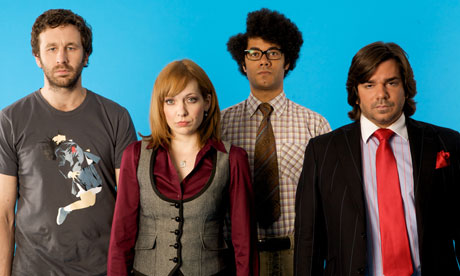 Goodbye to The IT Crowd

How do you say goodbye? When you have millions of people to say goodbye to? Most popular media, and particularly bands, have no idea how to do such a thing. It’s all about timing the exact moment to exit stage left and enjoy the rapturous applause, and it’s easy to get that very wrong. As a rule, most British sitcoms time their exits fairly well – normally it’s far too early, leaving fans frustrated that more brilliant material could potentially come out. But generally this is better than US sitcoms, which get run into the ground (to the point of having to kill off beloved characters to raise the stakes) and only die out when literally no-one is watching.  Beloved British comedy The IT Crowd at first looked to be going the former route; after finishing Series 4 in 2010, writer Graham Linehan declared that despite fans and Channel 4 wanting it, there would not be a fifth series. But there was a chance that a one-off special would appear somewhere down the line.

It was only about a week before the show aired that people started to believe that Linehan wasn’t lying. And once fans realized what was happening, the doubts started to rise – it’s been three long years since the last The IT Crowd episode. The main four actors have gone off and had other careers (even if in Richard Ayoade’s case it’s mainly been him still riffing on his Moss character).  Would they even want to come back? And as many old rock bands who reunite after decades apart will tell you – the longer you spend away from the stage, the harder it becomes to recapture the magic. Luckily, Linehan doesn’t know how to write a bad show – like Edgar Wright he has an incredible success rate with his work. So with two of the best sitcoms of the last 20 years (Father Ted and Black Books) already in the bank, there was absolutely no way he was going to mess up this one-off reunion show. It’s a unique situation for a TV show, something whose destiny is often decided without any input. 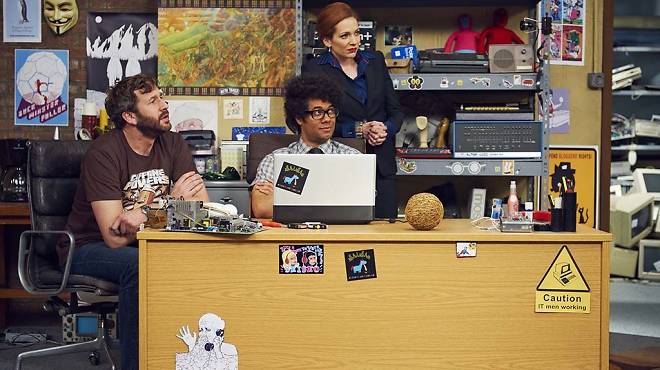 Another clue that the reunion show would be a belter was the lack of fuss or hype. There were no disputes between cast and crew, no monster commercial campaign. and if you were a fan of The IT Crowd, you heard about it one way or another through the internet grapevine. It just happened. And wouldn’t you know? The final show was one of the best episodes of The IT Crowd ever produced.

Let’s get the biggest complaint out the way first – yes, it probably wasn’t long enough. A 45-minute run time probably wasn’t enough to cram every last joke, reference and callback in. But I wasn’t too unhappy about this. Firstly, not everything is about length and size. Badum tish. Secondly, on a more serious point – 2-hour slots for a mere TV show are very rare things these days, particularly on commercial television. Doctor Who might get the odd lengthy special, but jeez, that guy has had to earn his corn for fifty years to get that sort of kudos that he can wander in to the BBC programming department and demand they set aside a whole evening for him to fix the galaxy with a screwdriver.

They could’ve done an Inbetweeners and gone for the cinema, but let’s be honest, where can they go with The IT Crowd that would suit a film format? The IT Crowd Go on Holiday? I don’t think so. Linehan has pondered a The IT Crowd film before, but stated that he’d only do it if he came up with enough strong material to fill the run time. And considering his record, I trust his judgement on this one. So let’s be happy about the fact that it was still double the length of a regular episode.

And in all honesty, even in 45 odd minutes we fans were spoilt rotten with gags and material. The main plot involved Roy and Jen becoming viral internet sensations for insulting a very small coffee shop barista (RE: my joke about not always being about size) and throwing coffee at a homeless woman respectively. To such an extent that Anonymous become involved. With this being The IT Crowd, there was other stuff going on, and no-one was left out. After the debut ‘webisode’ of his online series Game Board is a spectacular flop, Moss suffers a crisis of confidence and turns to women’s clothing to sort it out, and the world’s worst boss Douglas is trying to juggle the PR storm around Jen and Roy’s antics with an appearance on The Secret Millionaire.

In previous episodes the sub-plots have sometimes been malnourished or largely brought up just to make a joke or give a character some screen time in an episode dominated by another character, such as “Street Countdown.” But here, wonderfully, the three plots were juggled well and all came to a satisfying and pleasantly unexpected conclusion. Because this is a Linehan written show, with the quirky often surreal twists that involves, no-one quite knew how it would all end, so to end as it did – with the central trio finally emerging triumphant rather than just going back to normal – was well done. And having the last ever line be an exact copy of Roy’s first ever line in the pilot episode was a masterstroke. I imagine I wasn’t the only one who nerdgasmed at that point. 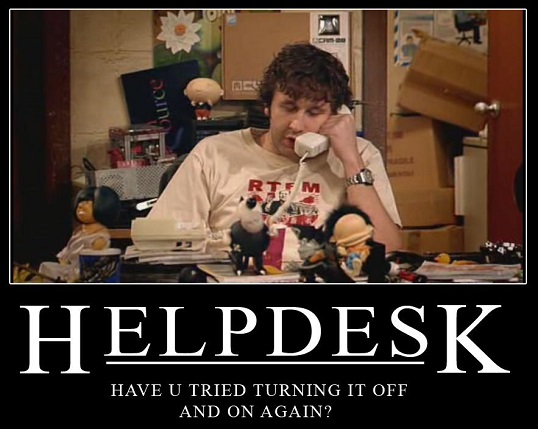 The secret to great comedy is great writing, and Linehan is supreme at his craft, and has the confidence to take swipes at contemporary culture and explore the boundaries whilst building solid foundations by knowing what works and what doesn’t. So the callbacks to previous episodes, notably a surprise return of ‘The Internet’ from Series 3, hit the spot and didn’t feel like desperate nods to the past. There were cultural parodies and hilarious send-ups of Anonymous,  YouTube web series and Twitter (or in this case Chitter) which felt fresh and acerbic. And borderline metafictional discussions between the lead trio about their previous scrapes (‘don’t you think the things that happen to us are sort of…strange?’ and ‘What normally happens in these situations?’ ‘Everything gets worse and worse, then it stops’) were fascinating diversions that were self-aware without being head-up-arse pretentious.

Sometimes, being given restrictions can create a tighter, more disciplined piece of work, and I think in one way the length restrictions on this episode actually worked in its favor. It was written completely free of flab and throwaway lines, and didn’t waste a second of the time it was on screen. The actors relished the task of eating up the screen as these beloved characters one more time, and if anything their respective dalliances with Hollywood, TV and theater only made them better at portraying these quirky misfits.

So the reunion show is over and fading into memory, and the goodbyes have all been said. See ya later and thanks for the memories, The IT Crowd. In the meantime, I’m gonna go on The Internet, browse Friendface and see if anyone wants to play a game of Street Countdown.