To Fans Dismay, Terminator Genisys Likely To Be PG-13

As if the stylized spelling of its title wasn’t enough to make fans balk, Jai Courtney who plays Kyle Reese has revealed Terminator: Genisys is likely to be PG-13. And fans are none too happy.

In 2012, which isn’t so long ago that fans have forgotten, Megan Ellison from Annapurna Pictures promised the Terminator franchise would be brought back to its roots when she stated on twitter, “We can’t really tell you guys anything about ‘Terminator BUT it will be an R rated film as God and James Cameron intended.” 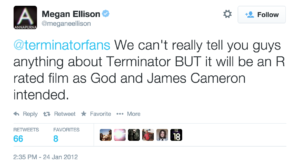 Her post was in response to fans’ fear that the fifth Terminator movie would be a watered down, family-friendly, PG-13 installment like Terminator Salvation – because nothing says friendly-family entertainment like the total annihilation of the human race by our robot overlords.

You would  think they would have learned from their mistakes when Terminator Salvation was the first in the Terminator franchise not to hit number one on its opening weekend – plus its poor reception by fans and critics, accusing the film of veering too far from the innate raw feeling of the its predecessors.

So what happened? Maybe God and James Cameron had different intentions. No, Hollywood loves money, sometimes more than artistic quality – okay, a lot of times.

We have come accustomed to our beloved franchises and movie remakes getting neutered: Alien vs. Predator, Die Hard, Robocop, Total Recall. The list goes on, and although it happens all the time now, it doesn’t get any easier seeing a piece of nostalgia forced to wear the cone of shame.

Production companies want to slap on those PG-13 label so they can draw in more money by making their movies available to a younger audience, but Terminator Genisys’ core audience isn’t today’s teenager; it’s yesteryear’s teenager, the 30 and 40 somethings of today, the young girl who had a poster of T2 Eddie Furlong above her bed (yes, that happened), the guy who has Skynet set as his wifi network. And while they welcome new fans, they won’t sacrifice quality of a good story. 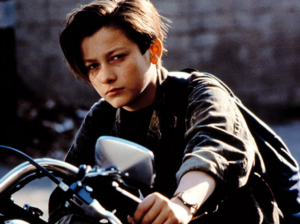 Fans demanding an R rated Terminator movie are not looking for more sex and violence and a certain number of F-bombs; they want unadulterated, quality film as it’s meant to be, not a gutted shell of a movie that has been molded into a studio’s cash cow.

But alas, today’s sci-fi feature flicks are expensive. For fear of losing money, production companies play it safe, and the true fans suffer. Perhaps Arnold appearing in Genisys will be enough to pull fans back in.

Over the next five years, if things go accordingly, you can expect to see a trilogy come out of Terminator: Genisys; however, according to Empire, the rights to the Terminator characters and ideas revert back to James Cameron in 2019. Although Cameron has stated that he has no plans to re-visit the Terminator world, he did say, “It might be fun to completely re-invent the franchise.”