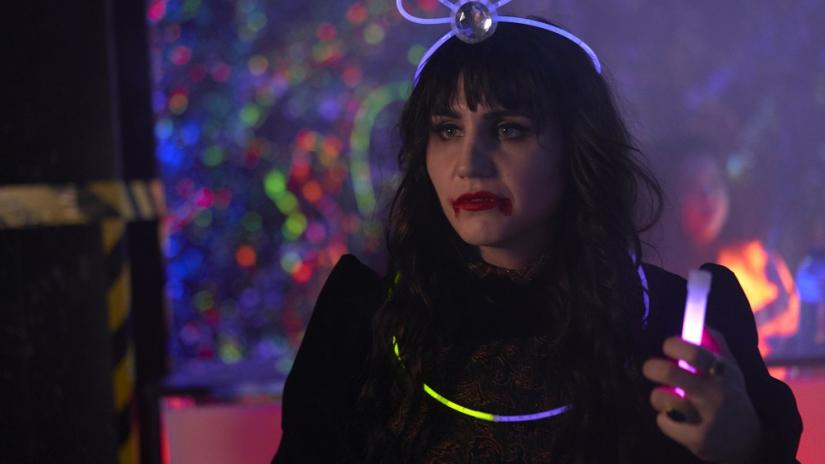 It seems a bit absurd to make this qualification, given that What We Do in the Shadows is a show about vampires – subject matter that usually falls readily into the macabre territory – but damn, the latest episode is a dark twenty minutes of television. A thoroughly enjoyable twenty minutes to my sensibilities, but make note, the measure of pleasure you may take from it is contingent on your tolerance for or appreciation of gallows humor.

The episode starts with our core vamps discussing how excited they aren’t for the Baron to still be with them. He’s woken up and decided he wants to go out for a night on the town. The vamps think this is to assess their work in taking over the city, and upon seeing their undeniable failure, to kill them. Laszlo suggests they kill him first-proposing the extremely covert mission name, “Operation: Accidentally Kill the Baron.” Nadjia’s biggest objection is to the lazy nomenclature, but Nandor has misgivings. The Baron is very much a relic of the old world, and needs to be persuaded out of wearing two ruffs, and changed into Colin Robinson’s clothing. At the outset, the Baron makes our dear but still archaic vamps look downright well adapted. He doesn’t blend at all into modern society, drinking the blood of a passing drink gentleman with neither subtlety nor subterfuge. The drink, however, makes him drunk, and suddenly a lot looser than we have seen him to this point.

At a club, the Baron suggests they do shots, and recognizing that their situation is unlikely to get better, the vamps shrug a what the hell, and take the shots, getting quickly intoxicated, and inevitably, as anyone who has gotten very drunk, very quickly knows will happen, getting very earnest and sincere. The Baron explains to the other vamps that he is not actually a Baron – his name is a bastardization of a joke made at his expense, mocking the fact that he is barren, because of his lack of genitals. All he ever wanted was children. The Baron and the vamps mutually confess to having planned to kill each other, and water flows freely under that bridge. This guy is fun, and the vamps no longer feel it’s necessary to kill him. The Baron wants to try pizza, but as we learned when Nadjia tried to eat some of Gregor’s popcorn, vampires can’t digest human food, and an extended, violent vomit scene ensues, and while I don’t necessarily endorse that much vomit, I’m inclined to agree with the Baron that pizza is emphatically worth it.

At a rave, the vamps – including the Baron – all drink the blood of people who are happily on club drugs and get pretty damn high. Then there’s karaoke, which provided my biggest laugh of the night – Nadjia doing insane interpretive dance while the Baron sings “Time of the Season” (by the Zombies. The jokes are all over on this show). They roll in just before sunlight, but the Baron, loose limbed from chemicals, has trouble getting his coat off and into his night skirts. He falls down the stairs and just as he is regaining his balance, Guillermo opens the door and the Baron is lit ablaze and ultimately eviscerated by sunlight. Bad news.

A couple of quick notes: I’ve consistently enjoyed the way this show incorporates the camera crew. Unlike a show like The Office, where for most of its run it kind of forgot that a camera crew was constantly following it’s characters, What We Do in the Shadows always acknowledges them. And tonight, the Baron ate the sound editor, adding just a hint of stakes for the humans in the documentary crew. Though our primary vamps are friendly and relatively disinterested in eating them, these people are moving amongst dangerous creatures, and not all of them have some sort of understanding with them.

Secondarily, there is a very good, very fast joke in this episode that works based exclusively on delivery – the Baron says there is something he’s always wanted to try, and without missing a beat, Laszlo responds “Coprophilia?” The Baron explains that it’s pizza, but then bounces back quickly, gives Laszlo a disbelieving looks and says “Coprophilia?” with every ounce of “are you serious?” that could possibly be mustered. Again, the delivery of this is immaculate, and works entirely on its own. But in case you were curious, I have googled it so you don’t have to have that search history on your conscience. It’s poop stuff. Abnormal interest and pleasure in poop. Laszlo, you are disgusting.

For a moment, I worried that there was something teetering on the mean-spirited about killing the Baron after his cathartic night on the town brought out so much humanity in him. And then I remembered every drunk I have ever known or ever been, and recalled that the sweetness he granted our vamps on that buzz probably wouldn’t last well into sobriety. It seldom does. And for his part, the Baron got to go out on a high, after a pleasant night. But perhaps there, I’m waxing a bit more romantic.

This could be an escalation. I am excited to see if there are narrative consequences. And hopeful. This show is a lot of fun and consistently wrings a lot of laughs out of every inch of itself, but I would be happy to see just a hint more serialization. Let’s see what happens!

FXvampiresWhat We Do In The Shadows

What’s the Difference Between Geeks and Nerds?