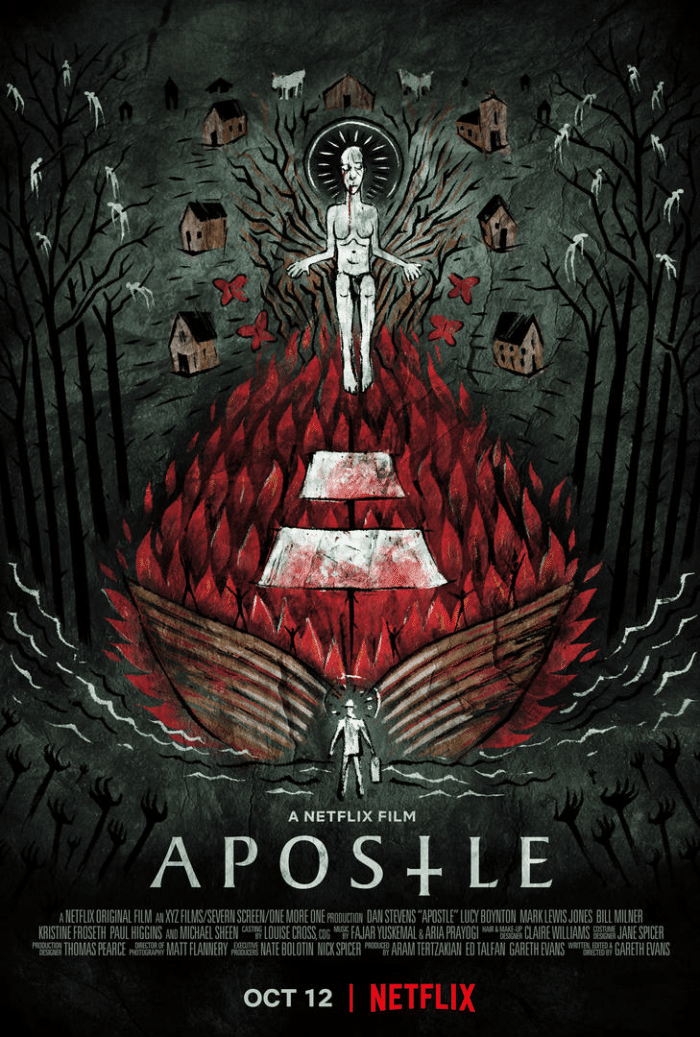 Great news, everybody, I owe me a beer! Cruel fate and necessity dictates that I establish whether this is a triumphant, tears of my enemies kind of beer, or a good old fashioned shame beer. My friends, I’m sad to report, it is the latter.

That my track record in guessing the plots of the movies I’ve watched since beginning this little experiment falls so profoundly in the camp of “sketchy at best” seems to be a solid rebuke to the near omnipresent criticism that trailers give away the whole movie. It was a pretty absurd argument to begin with – trailers are two minutes, movies are, well, longer -but people make it. They love it! They say it loudly and with a bizarre form of righteous anger, as if someone is, A Clockwork Orange style, pealing their eyes open and forcing them to observe. But. Wow. Barring a trailer with an interactive diagram, there was no world where a teaser would give away the plot of Apostle. And man, did I flub the vast majority of it. Friends, I assure you, I love to be right, with the kind of obnoxiousness only truly present in those who win just as poorly as they lose, but this time, I was really, truly delighted to be wrong. Apostle has a few narrative flaws, and I am still prepared to call the movie simply, unequivocally, perfect.

The bare minimum plot outline – the one that I will adhere most strongly to, because if ever a movie deserves to have your eyes put on it, this is the one-would be difficult to fully mistake. Dan Stevens (whose name I spelled wrong with an almost astounding gusto in my draft of the speculation – remember to shout out your editors, kids, they keep you from looking like the fool you sometimes are!) does indeed infiltrate a pagan cult to try to rescue his sister. There is, indeed, a lot of blood shed. But from there, everything goes kind of bananas. In the name of preserving the integrity of the experience – listen, I’m not the kind of girl who sweats spoilers, but I will say that having gone in green, I had multiple audible gasps, so I cannot in any kind of good conscience, reveal just how totally flipped out and bonkers the narrative becomes – I will just tell you the finer points of where I was wrong, a thing that I can do without needing to explain what was right. First, I had thought that Sister Stevens was kidnapped to be a sacrifice for a good harvest. This much I will give you for free, don’t say I never did anything fer ya. She is actually kidnapped for a ransom, which is one of those narrative flaws I alluded to back when we were one paragraph younger. I was wrong, too, about the cult attempting to make a true believer out of him. I was right about there being a fire, but not in the way I expected. And further: these things I can tell you without giving anything astounding away. And trust me, there is a lot to be astounded by. There is a surprisingly sweet and tender love story in this absolute horror show of a movie, and perhaps the most shocking part of the whole damn movie is that the love story does not actually involve Dan Stevens. I was, perhaps, previously too subtle in expressing that I think he’s painfully, ovary-twitchingly beautiful, but them’s the facts. It seems truly, deeply unexpected not to center him as the romantic lead, and ultimately that decision makes me appreciate the movie even more. And Dan Stevens, for that matter. Post Downton Abbey, he’s made some pretty bizarre career choices for having a mug that looks like his. The movie guides without telling; there is a lot the is alluded to, without being specifically stated for the viewer. It’s disturbing no matter how you slice it, but to reach the full depth of its impact, pay attention to the silent spaces, as well as the explicit text.

This movie has Michael Sheen in it! And he’s great. The last thing I had seen him in was Good Omens, and it is a loud and emphatic testament to him that, not for one moment, did I think of Aziraphale while I watched Apostle. He makes absolute hay of a complicated character.

Finally, I have, by virtue of revealing the nature of my beer debt, already explained that Dan does not, in fact, die at the end of the movie. I would normally consider that a massive spoiler, but honestly, the ending is so deeply bizarre that I don’t think it qualifies. In a movie that repeatedly gobsmacked me, the ending drew a genuine and heartfelt “what the shit” from me.

I cannot, in good conscience, recommend this movie enough. My last words will almost definitely be “hey hospice nurse, watch ‘Apostle’.” It’s so good. I want to talk about it to everyone.

And now, because I’ve set the bar way too high for the next movie to clear, I’m just going to lean into the inevitability of disaster. This week, I watch the trailer for: Vault of Horror.