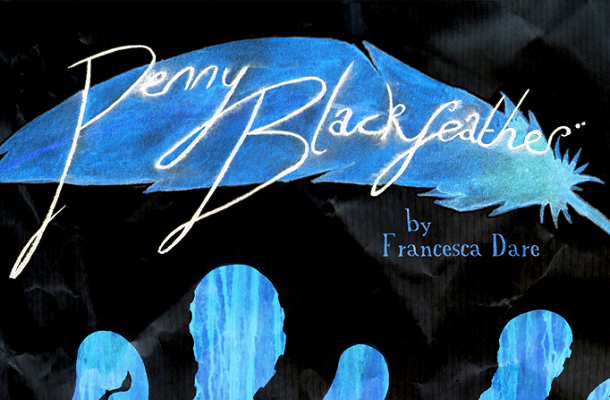 If you were to go into your local comic book shop and look at the names of those involved with the likes of mainstream publishers Marvel and DC, you’d probably leave with the impression that there’s little to no women in the comic book industry. While there is some unfortunate truth to the previous sentence, you wouldn’t have guessed it from the high amount of female comic talent at MCM London’s Comic Village; once such talented comic creator being Francesca Dare. 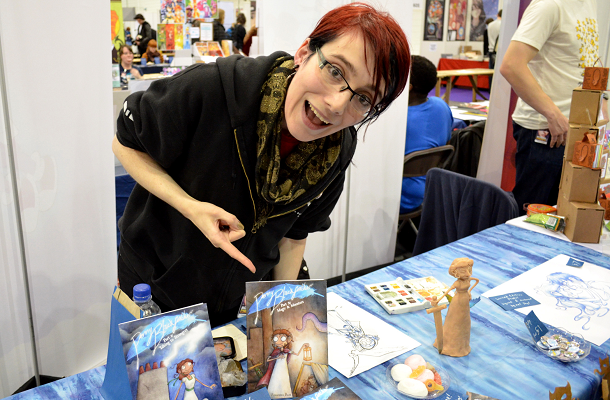 I spoke with Francesca at MCM London in the wet and windy heart of the English capitol. Her comic Penny Blackfeather is, well, I think it’s better if I let Francesca explain:

Hello, hello, I’m Francesca Dare and I make a web comic called Penny Blackfeather which is about adventures and eldritch terrors and parrots and all that sort of thing. And yes! I’m selling it here at MCM, and it’s very fun over here.

My comic is about a young girl in regency England who really wants to go on an adventure, but she’s never had a chance to. And then one day a real life adventurer turns up in her town and she thinks that this is her big chance to go an adventure but then, unfortunately, he gets kidnapped by monsters and she has to go and rescue him with the help of a parrot, and a ghost. And there are tentacled monsters and crazy, crazy women with evil plans, and it’s all getting very sinister, but hopefully in a fun way.

Indie comics are always the best place to go for slightly off-the-wall story ideas, as I found out in my chat with Steve Penfold, the artist of Moon; and Penny Blackfeather is certainly no different. It tells the tale of Penelope Blake, a young lady who, after growing tired of her mother’s attempts at marrying her off to rich, yet extremely boring suitors, goes snooping around an allegedly haunted mansion in search of an adventure. 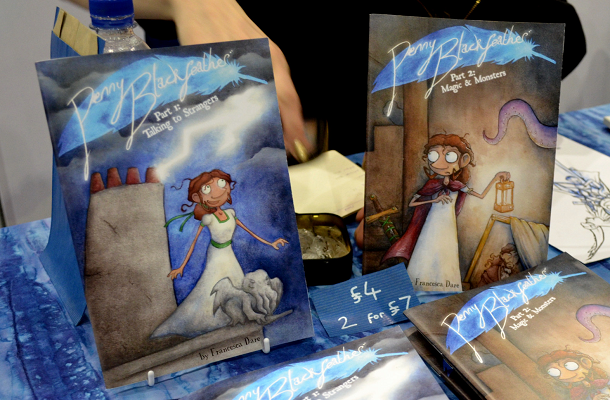 Funnily enough, Penelope is already in the company of the sarcastic ghost of her late grandfather, the world famous adventurer Nathaniel Blackfeather. Together they embark on/ stumble into an adventure full of Francesca’s aforementioned crazy ladies and bizarre beasties. It sounds like fun, but who is Penny Blackfeather really aimed at?

When I wrote it, I wrote it for me, so hopefully anyone. But I kind of wanted to make sure it was suitable for kids, so that kids read it, and the sort of people who can still read Asterix and laugh at all of the things that they hid in it, but still be able to show their kids and go “You’ll love this too, but mostly it’s for me”. That’s my thing. But it’s–. I just wanted to make something that I enjoyed reading, and I think that’s always the best thing to do really. I mean, I have no idea what I’m doing. And I should prob–. Don’t–! Don’t write that! No one should know! I know exactly what I’m doing! Professional. I know exactly what I’m doing…

Francesca Dare’s Penny Blackfeather and the comics of her fellow indie writers and artists may be the most interesting and imaginative comic books around, but the odds are certainly stacked against them when it comes to penetrating a market that’s almost entirely dominated by Marvel and DC. But Francesca is confident that her comics and others like it have something the likes of Marvel and DC are missing.

Ah no. The good thing about the comic village is that you can find so many different styles out here and it’s–. It’s people who’ve rejected the Marvel and DC model of “Oh lets just stick ’em in a suit with a boob window and have them punch something. That’ll do. They’ll buy it. Whatever.”, so it’s nice to have so many people who, because they’ve created it [their comics] themselves, they love it, they’ve put so much love into it and you can tell. It’s always really exciting. Even before I made this [Penny Blackfeather] I’ve always come to the comic village because there’s so much amazing stuff here. I get very excited.

Francesca Dare’s opinions on Marvel and DC’s apparent unwillingness to move away from their tried and tested superhero templates is one that’s echoed by many comic book fans and critics. We at Geek Insider have already explored the travesty that was The Rape of Ms. Marvel, the “novelty” of super-heroines wearing trousers, and Marvel writer Rick Remender’s irresponsible handling of the mutant-social minority metaphor in “On the Uncanny Avengers ‘M’ Word Debate”. Even our reviews of high profile comic books such as Action Comics #20 and Wolverine MAX # 7 have been less than glowing.

“I just wanted to make something that I enjoyed reading, and I think that’s always the best thing to do”

Granted, finding new and exciting comic books such as Francesca Dare’s Penny Blackfeather and Beyond The Bunker’s Moon, is often a difficult task. But a small dash of curiosity and an internet connection is all it really takes to find a plethora of web comics and indie publications by extremely talented creators. A good place to start would be to check out Francesca’s online offerings.

Many thanks to Francesca Dare for taking to talk to me at MCM London Comic Con about Penny Blackfeather. In addition to the links above, a whole load of Francesca’s artowork can be found on her deviantART page. Did you attend MCM London Comic Con and the wonderful Comic Village within? Are you a follower of web comics and indie comics? As always, we at Geek Insider are always eager to hear your thoughts, so drop us a comment in the section below!