All we know of Matthew Deaver, Pastor Deaver, is tertiary in context. Very little of what we have been told has come directly from the mouth of Matthew Deaver. We have been told of him, of his words, the type of person he was and wasn’t, and even heard his voice speaking. However, it is never him speaking directly to us. We are hearing his voice through a memory, through Ruth’s inner conscience, or through other means. Finally, he speaks to us.

Matthew Deaver tells us of Castle Rock as he sees it. Of the terrible happenings that have plagued the town for decades. He tells us of his youth. How, as an infant, he was prone to crying and his mother was convinced the devil had a hold over him. As such, she took a wooden hanger and attempted to strangle him with it. She held it over his tiny neck till he stopped crying and when that happened she walked away. However, he believes that God had other plans for him because moments later he began to cry once more. He dedicated his life to God from then on, seeing it as a sign that he was destined for a greater purpose.

He waited for instructions until finally, one terrible day, God answered. These words, almost exactly, were the very same that Warden Lacy had spoken when talking about The Kid. Is there a connection between the two?

The Kid Is No More

The Kid is running. He is in a grey sweatsuit. There are sirens in the background. Is he running from the police? There is something about his demeanor that shows an air of physicality for the pleasure of health, endurance, strength; not for the purpose of survival.

Next we see him dressed in a suit, preparing for something. He is giving a pitch to a room full of executive looking individuals. His pitch is regarding Alzheimers. He has a cure, a micro chip inserted into the brain. Was this The Kid before he became The Kid? Is this twenty-seven years ago? Impossible. He has an iPhone, something not brought to fruition on a massive scale till years later. And from that phone comes the voice of Alan Pangborn. The Kid inquires after his mother, Alan says his mother is fine, it is his father. Wait, wait, wait. What? Mother? Father? Henry? Henry Deaver? Is this some alternate universe? A dream maybe?

We decide to play along with whatever this insanity is. The Kid is Henry Matthew Deaver, Ruth and Alan are actually together, Henry’s (The Kid’s?) dad is alive. Well, he was. He has now passed. Henry #2 (as we will now call him because he is not the real Henry Deaver, or he is not in our version of reality at least) returns to Castle Rock. Something is amiss however. This is not the Castle Rock we are familiar with. The decrepit and decaying city falling into ruin is bustling with activity. The town is filled with people milling about, a festival is happening, shops are not boarded up and in disrepair. This is not the Castle Rock we have come to know in episodes 1-8.

Henry #2 hesitates outside the Deaver household. When he enters, the house is in complete disarray. There is a hodgepodge collection of things haphazardly stuffed into nooks and crannies throughout, trinkets overturned on stacks of newspapers, food left in pans in the kitchen to collect flies. Henry #2 sees a car and heads outside. This is when we really start to get itchy for answers as Molly Strand comes out. This we can expect since this was her house after all in our familiar reality. But she recognizes the man who stands before her as Henry Deaver.

The two head out for drinks. Molly seems fine. This may sound odd but, she doesn’t seem to be unstable or frantic in any way. She seems . . . capable, content. This is not the same Molly Strand we are familiar with, as such, this is now Molly #2.

Afterwards, Henry #2 returns to the Deaver household only to find the power is out. He heads to the basement breaker box. When the lights are restored he turns and finds a young boy in a cage. That boy, is Henry Matthew Deaver, the same Henry we are familiar with in our version of Castle Rock.

For the purposes of this varied universe we will now refer to the young Henry Deaver as TK2 (The Kid #2) for ease of reading. Obviously shaken, Henry #2 inquires about TK2. He is told that TK2 is not speaking much (sounds familiar), the only thing he is saying is “Henry Deaver” (sounds equally familiar). TK2 possesses the same forlorn, confused, and deadpan stare that The Kid retained. 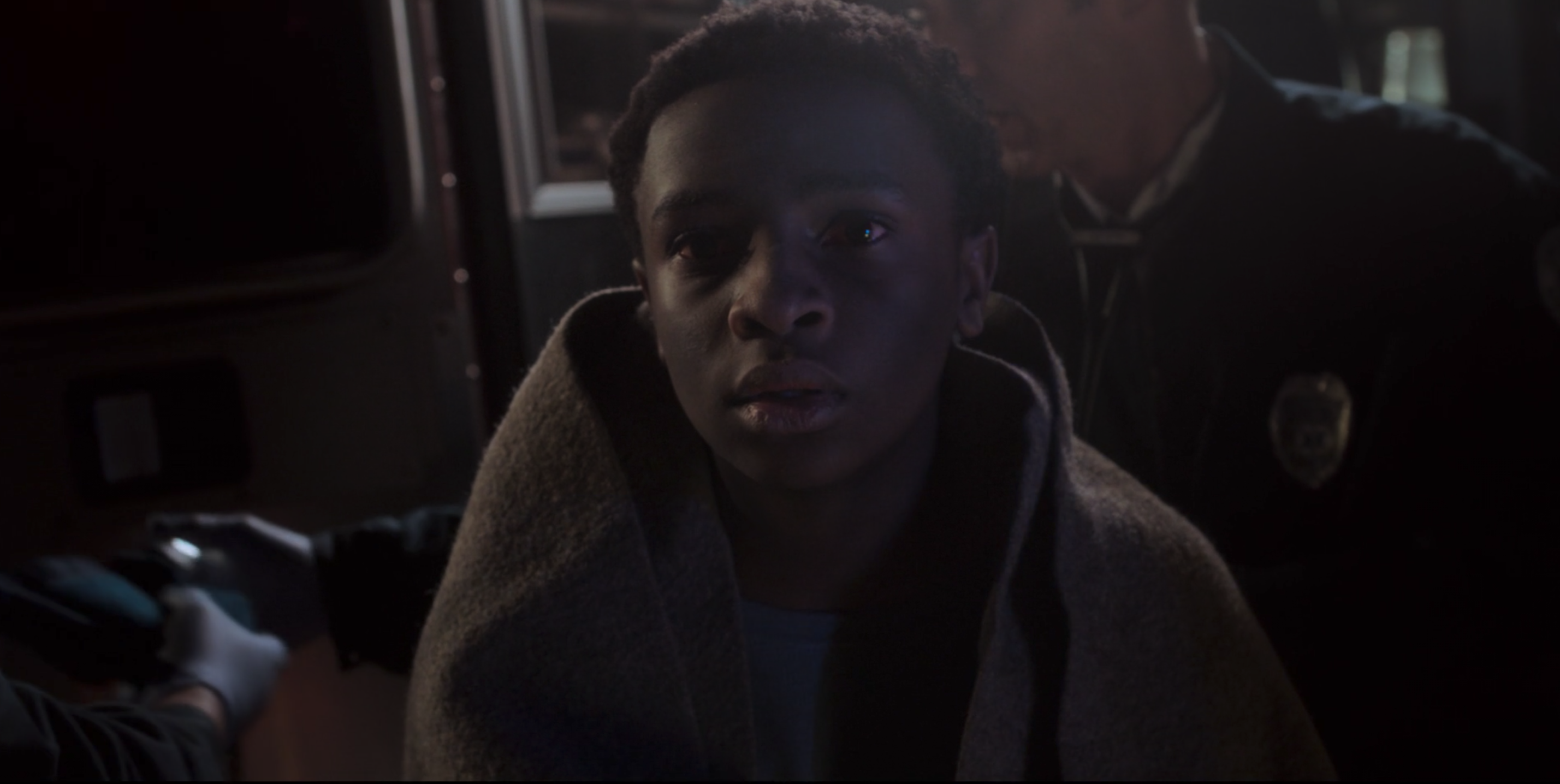 All of this parallels the same story we are familiar with already. The only major difference is that The Kid and Henry Deaver are now reversed. The following day Henry #2 begins to go through some of the mess that plagues the Deaver household. He discovers a tape player and listens to it. It is his father, Pastor Deaver, telling stories of the terrible things that happen in Castle Rock. Henry #2 heads out to the back shed and discovers boxes upon boxes of tapes. Each one detailing the horrors of history that are centered around Castle Rock. 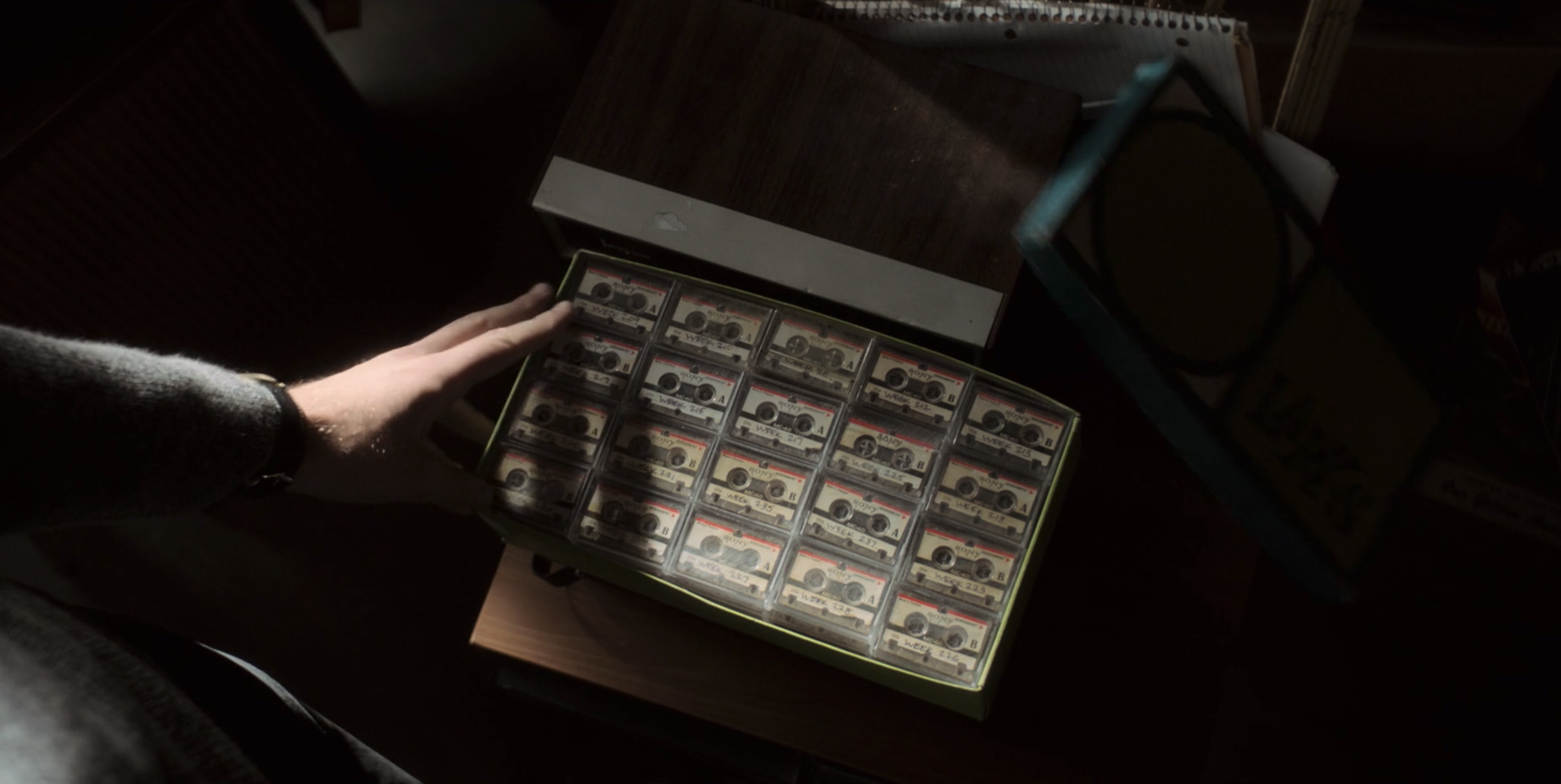 Henry #2 then goes for a stroll in the woods, his father’s voice echoing in the soundings of hearing something in the woods. The same story we have come to understand is exactly what Henry and Pastor Deaver were doing in the woods when Henry went missing. Another thing that is familiar to us was found on this particular stroll: a broken down version of The Filter.

Pastor Deaver tells the story of how TK2 came to him. TK2 wandered right up to the house, and when Pastor Deaver answered the door TK2 told him he heard it. He also continuously called him Dad. Confused, Pastor Deaver quizzed TK2 and TK2 continuously passed. Why wouldn’t he? In his world, this is his father, his home, these facts are all relevant and nearly everything is that same. But it isn’t. He isn’t this world’s Henry Deaver. And Pastor Deaver knew it.

Henry #2 sits down with Molly #2 and plays her a tape. He confirms that the things TK2 told his father are true. He also shows her something. One of the tapes. The tape shows when it was recorded, “Week 624.” For those who aren’t familiar with our Gregorian calendar there are 52 weeks in a year. Meaning that this tape is from year twelve. Henry #2 plays the tape more.

Pastor Deaver talks of spending Christmases in the basement with TK2, teaching him to carve soap figures, talking about life. And while he grew older, TK2 stayed the same. He says that he almost let him out. Many times actually. Then he says something so eerily familiar it’s chilling:

“As long as that devil walks the streets of Castle Rock, tragedy after tragedy will pile up. Men will turn on their own, blood will run in the streets until he is back in a cage.”

Do You Know Your Name?

Henry #2 says they have to speak with TK2. Molly #2 knows where he is, she’ll take him there. The ‘there’ is the same mental institution The Kid was placed in previously. And it is in complete disarray. Seven dead, ten missing. The cause of the fire? Mattresses were set alight. TK2 is being held at the police station. Molly #2 and Henry #2 head over to speak with him. Deja vu, anyone?

Molly #2 asks TK2 if he knows his name. His response: Henry Matthew Deaver. His age? He is unsure. Mid interview he grasps his head like he is in such pain. We know the sound, it is the sound of the schisma, the “voice of God” that was so important to Pastor Deaver.

He yells that they need to go, they need to go to the woods. Molly #2 reaches out and touches his hand and then . . . she sees everything. She knows what he says, who he is, and what he knows is all true. How and why, it makes no sense, but he is telling the truth. He is Henry Matthew Deaver, and he is also more. So she speaks to the Sheriff and gains custody of TK2 for the interim time period. They ditch the police tail they have and make their way to the woods, caution be damned.

TK2 rushes into the woods, searching. He stops in a clearing for no apparent reason. Molly #2 steps forward and after touching him is transported to his version of reality.

The woman is unfamiliar to us and out-of-place. Her garb is from another time period, she carries a bloodied knife, and then she runs. Molly #2 and TK2 give chase. Unbeknownst to them both they are also being trailed by an angry officer with a gun. Molly #2 is far too engrossed in the schisma to hear his pleas, and before they can understand what is happening Molly #2 is shot.

With her last words she tells Henry #2 to help him, help TK2. And then Henry #2 finds himself in the schisma.

What he sees references other pieces of the King multiverse. For example, the two prisoners running through the woods, one black the other white, are reminiscent of Shawshank Redemption. Then this world’s Henry Matthew Deaver finds himself in Castle Rock, but not his Castle Rock.

When he climbs to the top of the ledge that overlooks Castle Lake he sees Henry, this world’s Henry Matthew Deaver, in the center of the frozen Castle Lake with a young Alan Pangborn running to him. We have now come full circle. But it’s not over yet, there is still one more episode to go. Some of you may already understand what is happening. Others, you will just have to wait.

Check back for more on Castle Rock. Here is a sneak peek at Episode 10: