Life is nothing shy of a mystery for the townspeople of Castle Rock. It is only a matter of time before the truths that haunt this town come to the surface. As the first season of Castle Rock has progressed, so have the depth of mysteries and the tensions. Until the arrival of The Kid, the town had filtered out its terrible past. Everything was seen through a filter. We saw this initially with Molly’s attempt to revitalize downtown and just move forward with progress. Another example is when the Lacy house was being sold under the illusion that the reason for the sale was because the owner had committed suicide. And now, when Molly Strand sits in her office and attempts to make a sale, she makes assurances that the wildfires plaguing the surrounding forests have had no impact on Castle Rock.

The Kid and Alan Pangborn made a deal in the last episode. The Kid knows how to help Ruth, he just needs Alan to do something for him. What we do not realize is that this task he requests is an interesting one. He is in search of Warden Lacy’s car. It was sold to a scrap yard in Syracuse. The Kid assures Alan that it is essential they have what he needs. When Alan demands to know why The Kid explains in the only terms he knows how:

“Time is her enemy, sheriff.”

Alan is madly and irrevocably in love with Ruth and has been for some time. If he has the chance to save her memory and finally have his time with her, then he is willing to do whatever he can to make that a reality. And so it is that Alan embarks on this treasure hunt all the way in Syracuse. Is he just trying to get Alan out of the house or is there a true purpose to the vehicle’s significance? 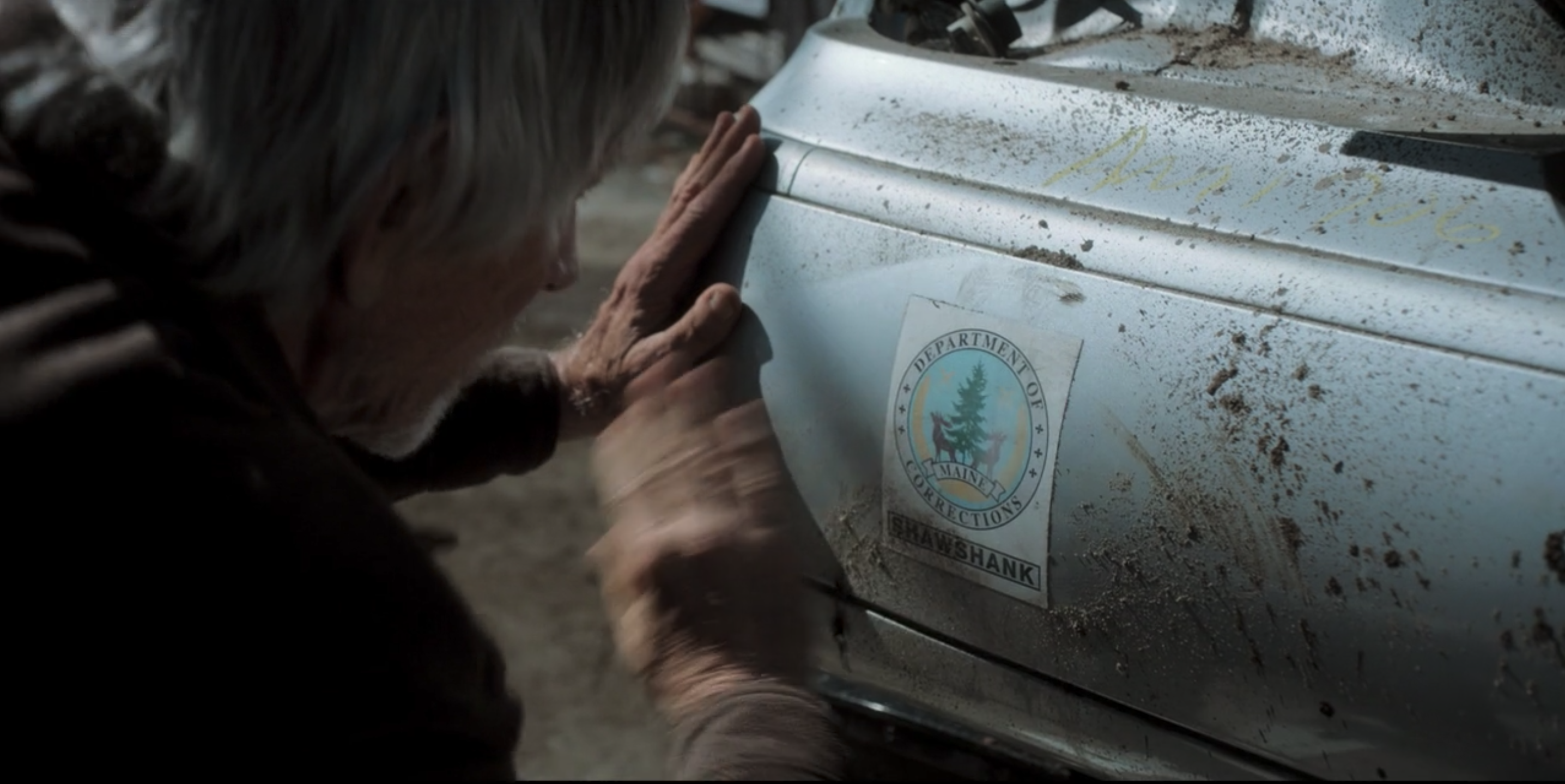 Since his release, The Kid has not had a steady home or place of residence. With no name and no information it is difficult to find him a place to go. All remain uneasy around him and on edge at his oddities. He rifles through the old boxes in the attic of the shed. He puts on clothes that were Pastor Deaver’s, watches old videos Deaver took of Henry and maintains a general air of lurking about.

While everyone is out that morning, The Kid comes into the house and wanders about. He starts by setting the record player on to “The Sun Ain’t Gonna Shine Anymore” by The Walker Brothers. The lyrics of which detail a lover missing his beloved and how miserable it is without them. The lyrics could mean something else entirely when you look at them out of context:

He walks about the house pausing to stare at a blank wall for some time in the dining room. Next, he moves to the bedroom and looks himself over in the long mirror. His expression remains neutral, but his actions seem to have purpose. Why could that be?

After some time in limbo, a solution has finally presented itself for The Kid and Henry. The asylum that Henry had investigated in order to help The Kid regain his memory and transition back into the real world has an open spot. The two head over to drop off The Kid. While checking in, a crow deliberately smashes itself into the ground effectively ending its own life. According to the intake nurse, that is the second time that very thing has happened that week. Curiouser and Curiouser.

Earlier in the series we discovered that Henry Deaver has a son. His son takes a bus to Castle Rock in order to see his grandmother in light of her decreasing health. While Henry is off exploring, The Kid is at the asylum, and Alan is in Syracuse, Wendell gets some time with Ruth. In his time, Wendell asks his grandmother why there are so many missing pieces to the chess set. Ruth decides to oblige his question and deigns it worthy of an honest answer.

Ruth tells him how her mind operates no longer on a linear timeline, but rather an erratic timeline that loops through the same event over and over. Her timeline could be in the past or in the present. She even suspects the future, but she has no certainties. This is why she is often distant, she is in a different memory than the present. This is why there are pieces missing. Each room has a different chess piece. When she is in her memory, she can use the chess piece to find her way back to whatever the present time is. Otherwise, she gets lost in the memories or in the creation of memories. The addition of Wendell to the story is not yet definitive. We shall see what his role will be in the remainder of the episodes.

Henry saw two men at the town meeting to commemorate the service of Alan Pangborn. He also saw the same two men at the service for the reburial of Paster Deaver. When Henry decides to venture off into the woods with a video camera, retracing the steps he and his father took, he winds up deep in the forest. The battery of the video camera dies and Henry is lost, he begins wandering in an attempt to make his way out of the woods.

Darkness falls and he stumbles upon a man by a fire. He speaks up and startles the man, he moves to apologize but realizes he recognizes the man. He was at the funeral and the bridge commemoration. A second man comes up to join them. This man was the other man. He communicates with sign language. His name is Odin Branch and the other man is his translator, Willie. 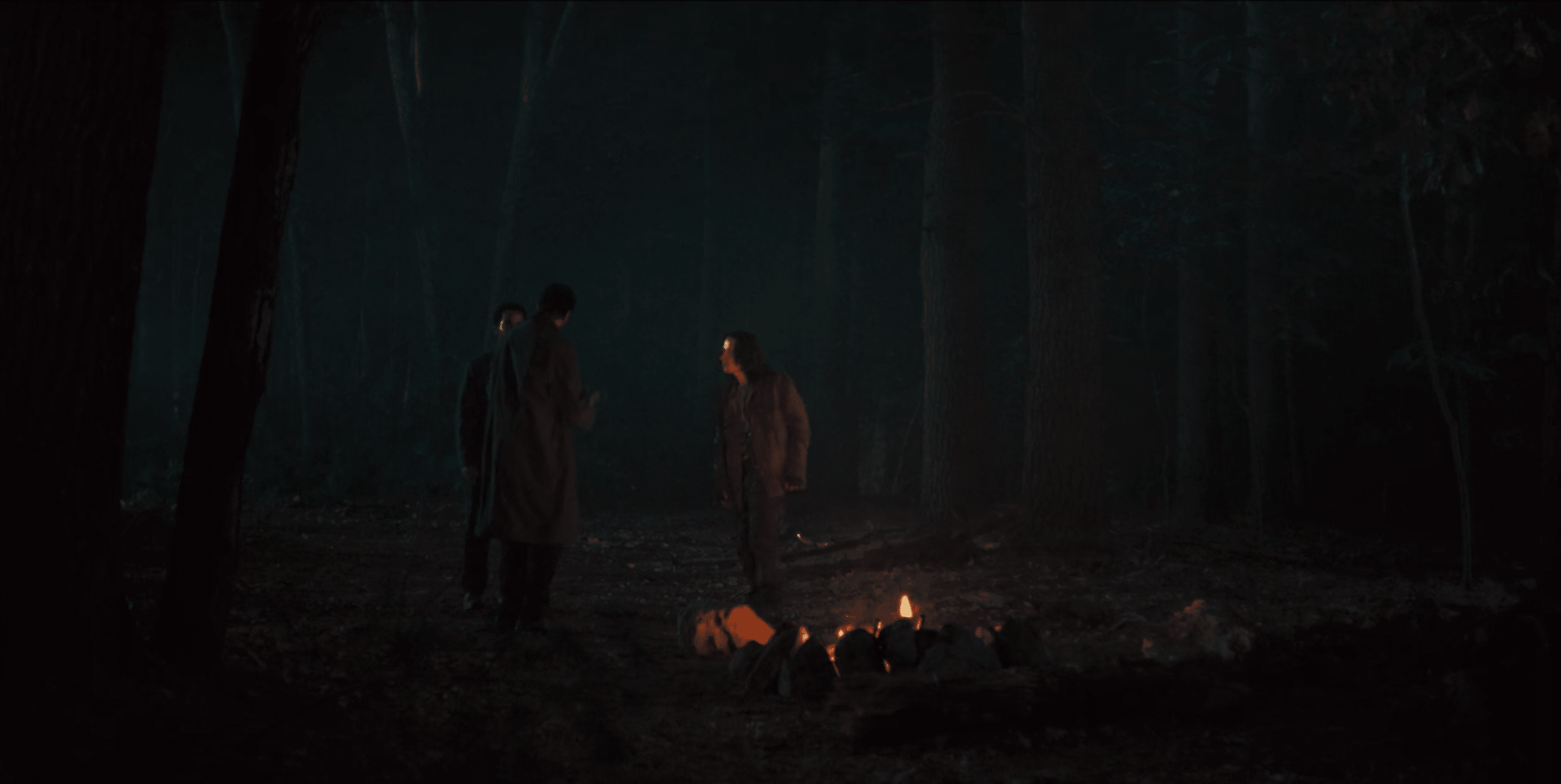 Odin tells Henry that he knew his father. They believed in the same thing. It is a sound that they call the “Music of the Spheres” or schisma. It is a scientific term to explain sound that relates to all possible pasts and all possible presents.

Schisma, Odin explains, is the sound of the universe trying to reconcile all possible pasts and presents. That is the sound of the ringing that Henry hears in his ears. Henry’s father had an idea for a design that provided a way to tune out the other noise. Pastor Deaver referred to it as “The Filter.” He created a design, but never got the chance to build it. Odin Branch did. He takes Henry to see it. 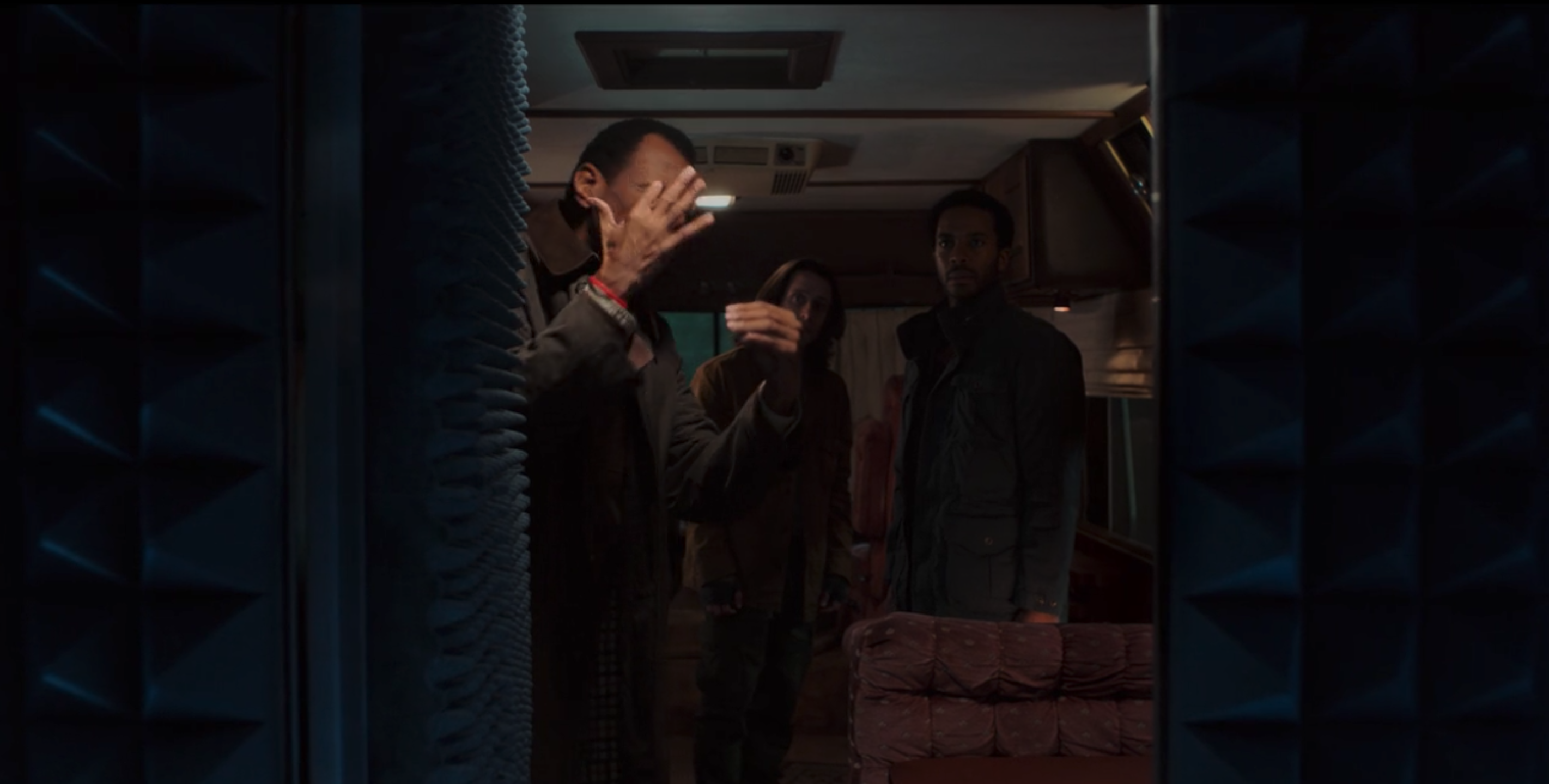 He then tells Henry to try it out. Rather than letting him make the decision himself he closes the door on Henry and locks him into the room. Henry tries to get out but with the room muffling all sound he makes, even to his own ears, the ringing he hears intensifies. 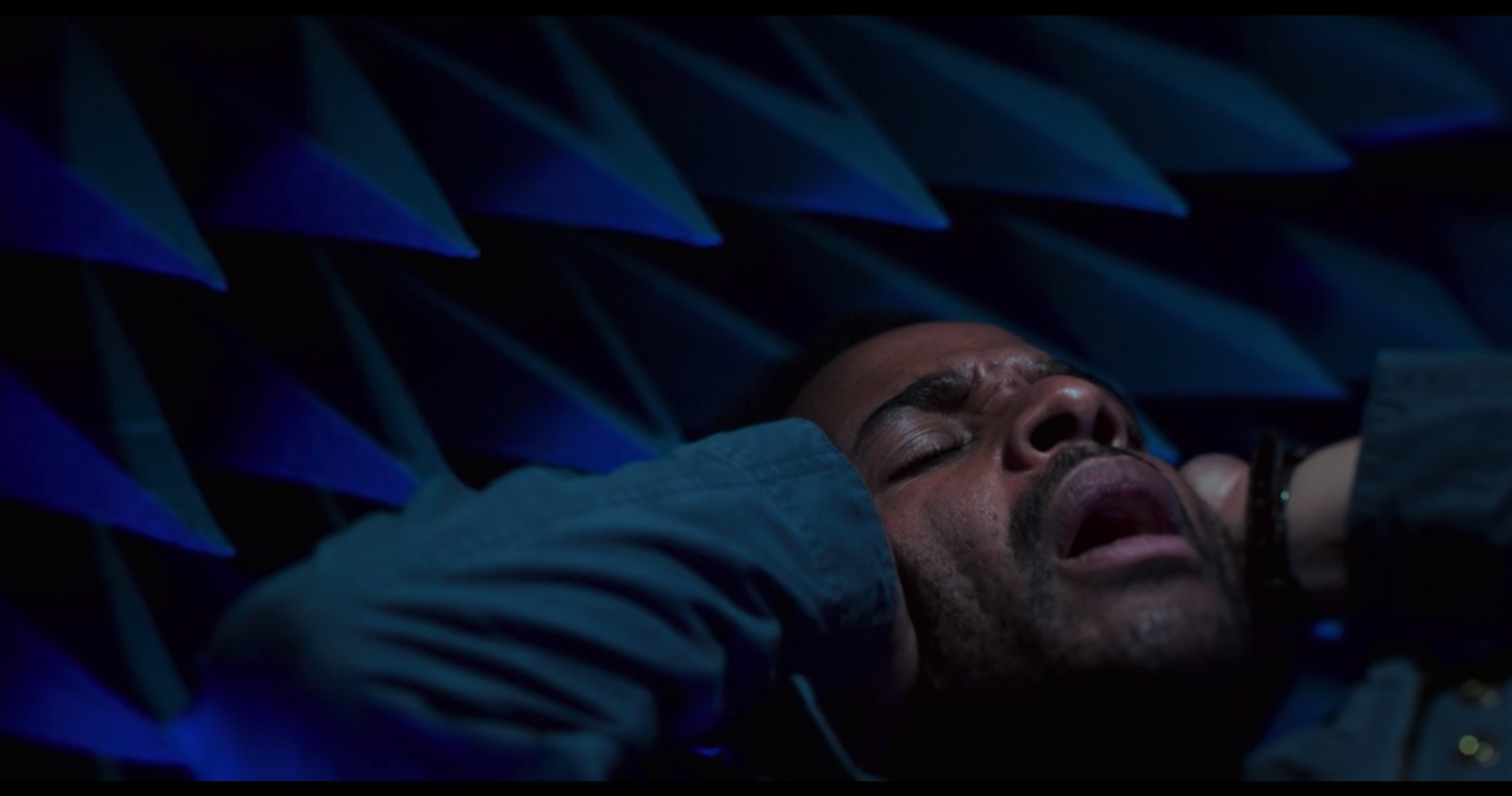 In Castle Rock, there are moments in which things seem to be slightly normal to an extent. Henry went exploring the woods and maybe ended up in a soundproof soundless box. The Kid was in a psychiatric hospital to help him regain his memory. Alan was still on the road from the Syracuse expedition. All this, minus the weird stuff, gave the illusion of things settling back down again. Nothing stays dead in Castle Rock, however.

A news report tells of a fire at a nearby psychiatric facility that is suspected to have killed the majority of the patients within. It is believed to be caused from ashes and sparks that floated in on the wind from the wildfires. While this information is made public, The Kid enters the Deaver household with leisure as if it were a daily routine.

It is not a routine, not for The Kid. It was, however, something that Pastor Deaver most likely did. The Kid is wearing his clothing, walking about like he is at home, watching old videos of Henry as a boy. None of which make much sense. He also said the same thing Henry’s father said in his memories, “do you hear it now?” Is The Kid part of the schisma?

Ruth is caught unawares when The Kid comes in and the look on her face is one of shock and horror. What is it she is so afraid of? Does she know something about the kid?

Check back for more on Castle Rock. Here is a sneak peek at Episode 7: