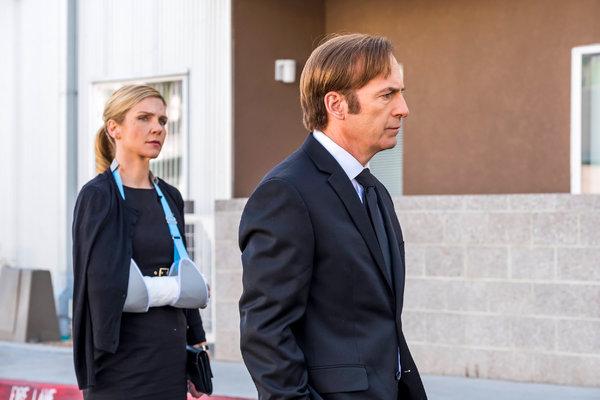 Better Call Saul has a fairly obvious premise: how did Jimmy McGill become Saul Goodman? And, to a lesser degree, what was life like for a few of the other characters in the Breaking Bad universe—Mike Ehrmantraut, Gus Fring, and even Hector Salamanca—before Walter White turned their lives upside-down (and actually ended them)?

However, at its core, Better Call Saul has always been about two brothers. And it’s pretty clear after three seasons that Jimmy’s relationship with Chuck played a huge role in, and was possibly even the driving force behind, the ultimate transformation of Albuquerque’s favorite attorney to the elderly into the man best known for laundering Heisenberg’s meth money. Granted, the basic elements of Saul Goodman—the greed, the salesmanship, the general disregard for ethics and morals—were always there. But something—or someone—happened along the way to bring them out, and, as much as anything else, that someone was Charles McGill.

At first, it’s hard to determine just how, and how much, Chuck’s death affects Jimmy. He rushes over to Chuck’s house when he hears the news, but he doesn’t show a lot of emotion. He knows Chuck must have relapsed since they last spoke since electrical appliances that were in use only a few days before are in the yard. But he doesn’t say much, and he doesn’t show any visible signs of mourning. This continues at Kim’s as well as at the memorial service. Everyone around him is visibly moved, but Jimmy just sits there. What could he be thinking?

It’s not until Howard shares his theory of events with Jimmy that we get a glimpse of his frame of mind—but it’s not what most of us would have expected.

In short, Howard believes Chuck committed suicide because Howard forced Chuck out of HHM, which was largely because Chuck’s malpractice insurance rates were being raised due to his condition. We know from last season that this is a simplified but accurate version of exactly what happened. What Howard doesn’t know, however, is that Jimmy’s the one that intentionally told the insurance carrier about Chuck’s mental illness just to set these events in motion. But he didn’t want Chuck to burn his own house down while still in it. That, coupled with what Jimmy and Kim (but mostly Jimmy) did to Chuck at the hearing, should be enough to produce a crippling sense of guilt.

So what was Jimmy’s reaction? “Well, Howard, I guess that’s your cross to bear.” And, with that, he starts making coffee and going about his day as if nothing had happened. We don’t know how this will hit him later, but, at least for now, Jimmy’s decided to ignore any guilty feelings he might have over Chuck and move on. Probably not the most healthy way to handle it, but since their relationship has always been anything but healthy, it’s not surprising.

In other news, Mike says goodbye to SMQ Parking since he is now (at least in Lydia’s database) a security consultant with Madrigal Electromotive pulling in about $10K per week. But Mike’s not happy just sitting around collecting a paycheck, so he decides to essentially break into Madrigal’s Las Cruces facility in the most “Mike” way possible—stealing another employee’s security badge and disabling his car— just to show management that security and safety are sorely lacking. If they’re going to pay him to consult about security (even if it’s technically his money in the first place), he’s going to hold up his end of the bargain.

Rather than creating change, Nacho is realizing that, despite switching Hector’s pills and triggering the heart attack as he’d planned, nothing’s really changed at all for him. Hector won’t be around to call the shots (at least, not until he gets his wheelchair with the little bell), but Juan Bolsa and Gus Fring still expect Nacho to run the Salamanca territory as if nothing has happened. Which probably means he won’t be able to move the operation out of his father’s upholstery shop anytime soon. Oh, and he’s also being tracked by Victor (which means Gus is keeping an eye on him). Gus is also predicting that someone will move on the Salamancas, which probably means we’re about to see the events that started the feud between Gus and the cartel that played out in Breaking Bad.

Not a bad episode—in typical season premiere fashion, it’s light on action but sets the table nicely for the season to come. I’m looking forward to it.