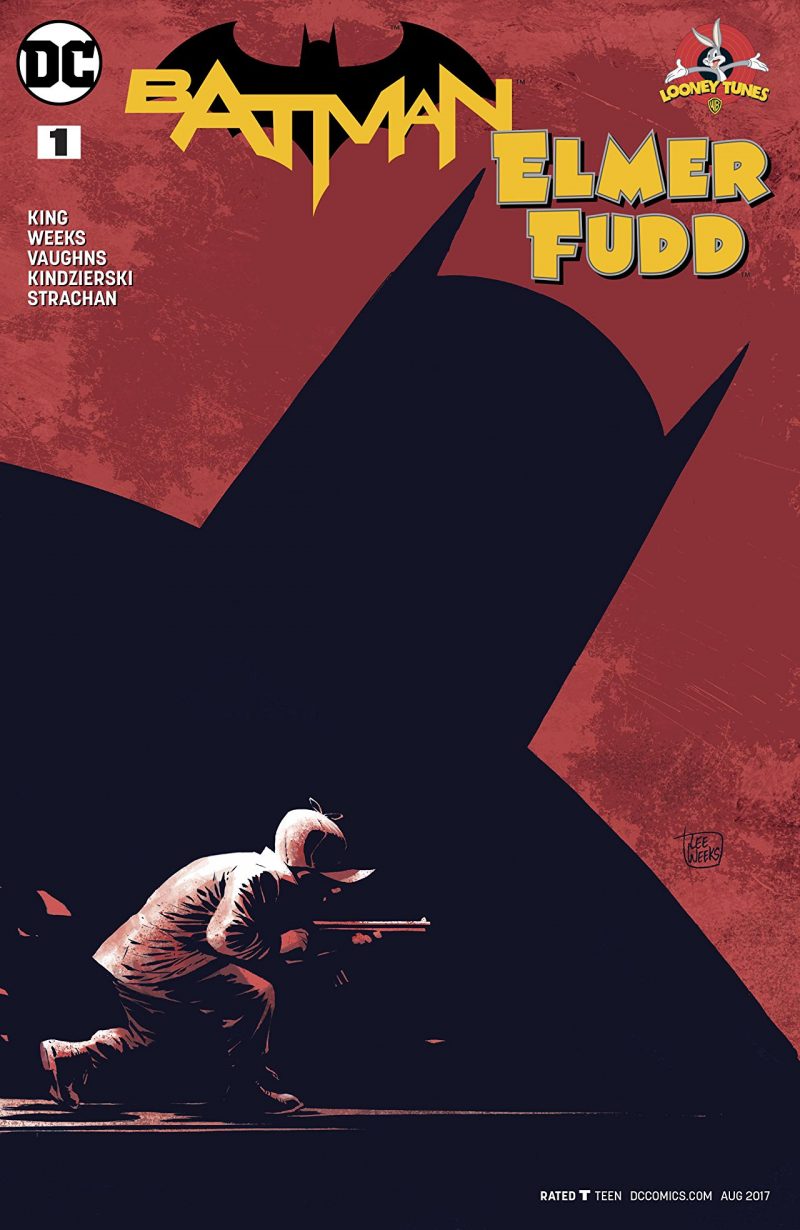 This week is a little different. It’s a comic, but it’s in a completely different form.

A couple of weeks back, DC Comics released the Batman/Elmer Fudd Special. It sold out almost instantly.

As a primarily physical reader, I missed out on this issue and was going to wait for the reprint, but then, seemingly out of the blue, it was online.

Legendary comics artist Neal Adams (Green Lantern/Green Arrow, Batman) recorded an audio drama version or as he puts it, an homage. He had the visuals up with it (I’m assuming it was too much to write out a whole actual audio drama for just a fun side thing.)

Elmer Fudd is a bounty hunter. He was ready to give it all up to be with his love, Silver St. Cloud. But she’s dead. He tracks down Bugs “The Bunny” to Porky’s Bar and confronts him. Bugs trades the name of who hired him for Elmer to let him go. Bruce Wayne.

Wayne also loved Silver once, but she found about his nocturnal activities and left him. Fudd confronts Wayne at a party and shoots him. Returning home, the hunter is hunted by Batman. The Dark Knight confronts Fudd, intending to take him in until Fudd reveals why he did it.

Joining together to avenge St. Cloud, they go to Porky’s and assault the patrons, trying to shake them down for the name of Bug’s real employer. They fight the patrons, each a representation of a classic Looney Tunes character.

This dynamic dwuo (sic) beat them all down except for Bugs. With him is Silver, tired of loving dangerous men. So she faked her death so that Elmer wouldn’t follow her. And she told Bugs to tell Elmer it was Wayne who hired him, to keep him off her trail.

She leaves them. Bugs orders a carrot juice. Elmer makes it two. Batman sits down and asks for a third. Porky drains the last of the carrot juice. The bottle empty, he says “That’s all, Folks.” 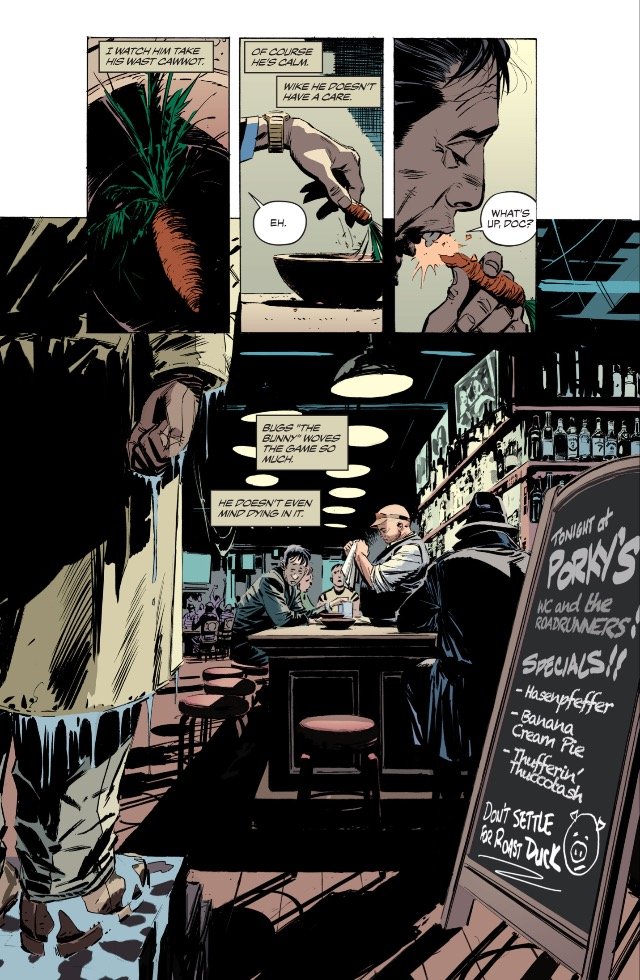 BM/EF is smart, emotional, and filled with in-jokes for the hardcore Looney Tunes fan. By letting Batman be in the backseat, almost a guest-star as opposed to the other way, the audience relates to Fudd like never before. Relating to him,

at all, that is. King is one of the best writers in the industry right now (I’ve talked about how much I like his stuff before). If you’re not onto him yet, read one of his joints. Great stuff. As in his other work, King’s characters are brilliant reinterpretations.

I’ve only experienced the comic as it was displayed in Adam’s video. I can’t judge Weeks’ ability to compose pages, but his linework in excellent. Fudd is subtle and restrained, yet also filled with rage. A different take on the character to be sure, but it still feels genuinely Fudd.

Lovern Kindzierski’s coloring is fantastic. It’s dark, moody, and noir. The colors compliment the art, as they should, but in some cases, the humanized Looney Tunes are the only visual identifiers (Daffy).

Adams does the Fudd voice, as well as the rest of the Looney Tunes. His Fudd sells the emotion and his Batman is pretty good too. Even as an amateur voice actor, he does a good job of making sure you know who’s speaking. It does help that the images are shown. Not an official release, but it’s cool to see creators make fan projects. The mix of classic Looney Tunes music with the dark visuals works much better than you’d think. Thought was clearly put into this. Maybe Adams can do the voices if they make an official motion comic.

Batman/Elmer Fudd can be purchased digitally here. It will be reprinted in trade paperback with the rest of the Looney Tunes/DC crossovers in February. You can listen to Neal Adam’s delightful audio drama here.

How Blockchain Technology and Crypto Currencies are Changing Major Industries