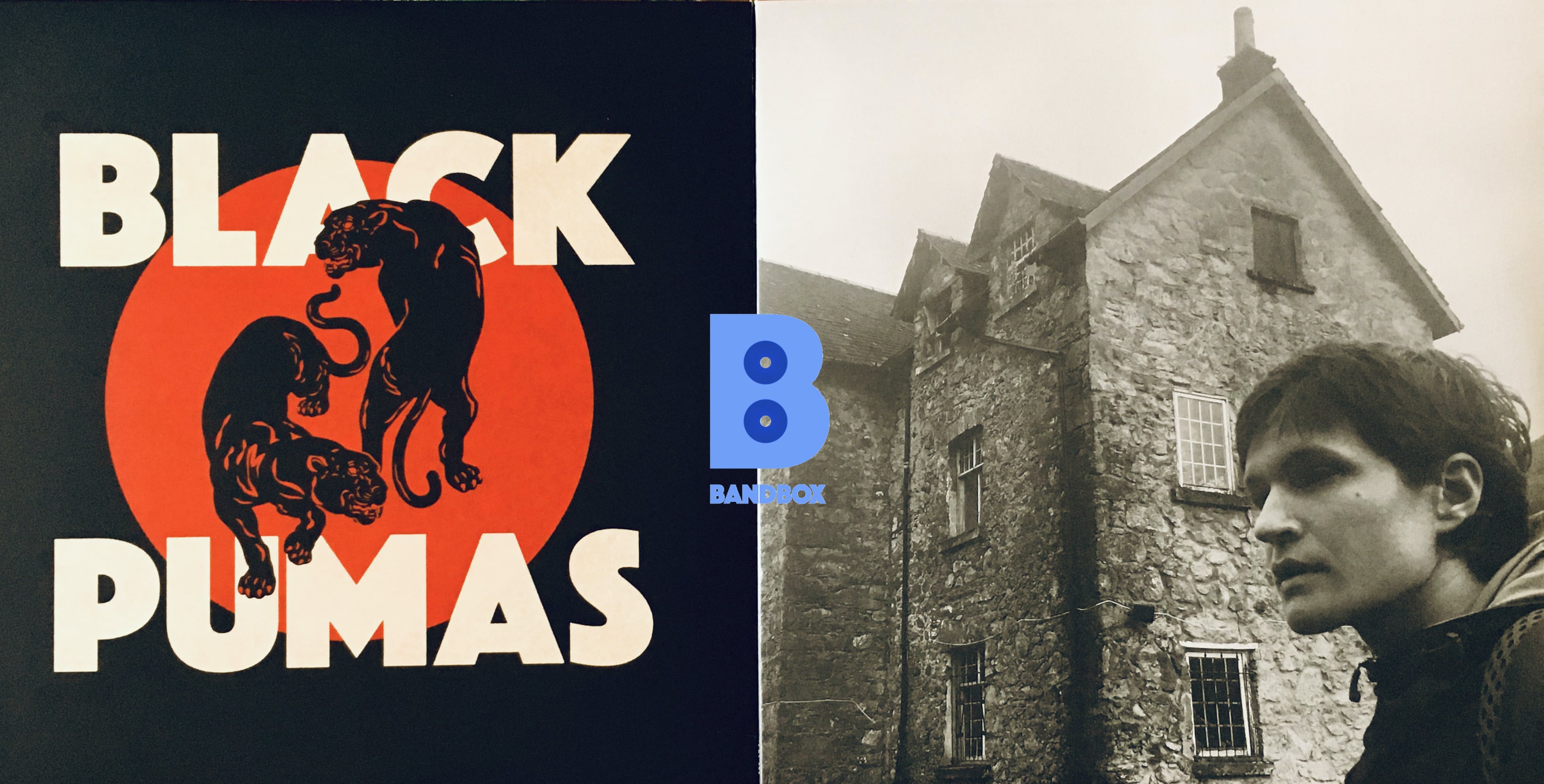 Prepare your turntable for heavy rotation bangers vinyl fans, ’cause Bandbox record club is out to bring the record store to your own front door.

That’s right music fans, Team Bandbox is offering a truly tailor made vinyl club experience every month by letting you fill your box with artists and albums that fit your own personal tastes. As their slogan goes, it’s pretty much like having the record store delivered to your front door every month. Bandbox is currently boasting a record store style variety of artists including Wilco, Marvin Gaye, and Mr. David Bowie. And just so you know – they’ve got a slew of shiny exclusive color pressings currently in stock, including a sexy reissue of Elliott Smith’s late-90s materpiece Either/Or that you really do not want to sleep on.

As it is, having it your way really is the Bandbox mantra. Offering subscribers the choice of a single album from an artist you love, and a fresh edition of Bandbox’s artist-specific fan zine showing up every single month, the B-Box service has effectively made it possible to do some legit bin-diving from the comfort and safety of your very own home. And you can now dig their vinyl+zine treasures for a beyond reasonable $29 a month.

Did I mention Bandbox even offers FREE SHIPPING for members? Well they do. And it’s sort of just the icing on the record club cake. So what’s in August’s box? A pair of indie gems with Black Pumas’ self-titled 2019 debut, and Adrianne Lenker’s 2018 solo stunner Abysskiss.

Right about now, you might be wondering why I’ve got two albums from different artists in my August box. That’s because vinyl is in such high demand these days, there’s a full-on logjam effect happening at pressing plants across the globe, and pretty much every artist, label, and record club out there is experiencing production delays… including the fine folks at Bandbox, Thankfully, they were kind enough to pack up my slightly backlogged albums in one shiny box this month.

Potential delays aside, Bandbox pressings have been more than worth the wait, and the have it your way aesthetic is designed to ease the nerves of folks wary of the record club scene. Just so you know, you can still choose to be surprised by Team Bandbox every month if surprises happen to be your bag. And fear not if you do go the surprise route as Bandbox will actually let you integrate your Discogs account to ensure they don’t send you something you already have in your collection.

Of course, if you’re really, really suspect, you can pump the brakes on your subscription at any time by simply pausing your sub. It’s unlikely you’ll want to “pause” anything once you’ve signed up and experienced BandBox for yourself. Just know that your Bandbox experience will be every bit as amazing as you make it.

If you call yourself a music fan, you should already know who Black Pumas and Adrianne Lenker are, the former because they’ve been one of the biggest breakout successes on the indie scene in the few years, and the latter because she’s spent the better part of the last decade cranking out indie rock diamonds with Big Thief. As for the album’s Bandbox tabbed for the exclusive treatment for each, well, they’re both well worthy of the honor. Let’s have a look, shall we?

As far as meteoric rises to the top of the music scene go, there are not many acts in the history of music who’ve risen faster than Black Pumas. If you’re unfamiliar with their story, it began when singer/guitarist Eric Burton got tired of busking his way through life in Southern California, and made off for the sun-baked hills of Austin, Texas.

There, he was introduced to Adrian Quesada, a Grammy-winning producer/guitarist/songwriter out to forge a new musical path for himself. That meeting took place in 2018, and it wasn’t long before the pair were trading musical ideas. As both men would tell you, it was clear right of the bat they were more than just simpatico. Mere weeks after their first meeting, Burton and Quesada set out to record some songs.

Those recordings ultimately became their debut album Black Pumas, an infectious, endlessly hooky collection of songs steeped in a classic soul sound that’s dressed up with a dash of modern pop, and flourishes of pseudo-psychedelic song craft. Yes, that blend of styles makes for a wholly unique sound, which is why just over a year after forming, Black Pumas were winning awards at the SXSW Music Festival, releasing Black Pumas in 2019 to almost universally positive reviews, and even earning a trip to the Grammy Awards with a Best New Artist nomination.

If you’ve heard the album, you know those accolades are all well earned. If not, you need to correct that oversight with all due haste, ’cause Black Pumas is the very definition of instant classic, and your record collection is simply not complete without it.

Adrianne Lenker’s musical aesthetic has been the driving force behind indie rockers Big Thief for a few years now. And if you dig a little crunchified rock, that should at least be regulars in your listening queue. Formed in 2015, Big Thief has, to date, served up four full-length albums of pure indie rock bliss, each fronted by Lenker’s unique vocals and introspective lyrics.

Even as Big Thief continues to build on its already impressive legacy, it hasn’t all been smooth sailing for Lenker’s band as she and the group’s guitarist/songwriter/co-founder Buck Meek saw their marriage fall apart along the way. Thankfully, they’ve managed to stay friends and even kept their band together. Still, the heartache spawned from their difficult split left Lenker with a glut of intensely personal songs she felt better suited to be recorded apart from her bandmates.

Released in 2018, Abysskiss is Lenker’s first solo effort since breaking out with Big Thief, and, save for her sublimely strained vocals, the album is about as far away from the band’s crunchy grit as you can get. And with all due respect to Big Thief (whom I am, in fact, a fan of), that proves to be a very good thing as Abysskiss finds Lenker stripping her songs down to bare bones, and crafting a collection of ethereal, folk-tinged mood music possessed of a raw-nerve intimacy most artists never even dream of aspiring to.

As it is, I’m not really gonna say any more about Abysskiss‘ sparse sonic energy, or it stark emotional landscapes, because you just have to hear the album to understand. For what it’s worth, I sincerely hope you hear it via this killer Bandbox pressing.

You might’ve noticed that prior photo defining a bandbox as: “a cardboard box, typically square, for sharing music.” Every single Bandbox lives up to that billing, allowing super fans of featured bands to delve deeper into their music than ever before via an artist-centric zine featuring interviews, album breakdowns, and killer behind-the-scenes photos.

Bandbox issue #40 takes a deep dive into the making of Black Pumas’ breakout debut, as well as offering a revelatory look at the making of the band itself.

As for Bandbox issue #56, it gives Adrianne Lenker all the space she needs to discuss the heartbreaks and life-aches that helped shape the mood of her solo masterpiece.

I know, I know, everybody loves a good zine, but this is a vinyl unboxing, so let’s go ahead and have a gander at that wax, eh?

Before you dig out that Black Pumas exclusive, there are a couple of things you’ll want to have a look at first, like the printed inner sleeve featuring a full lyrics breakdown, and a slick shot of the band’s boots alongside a black cat on the flip side.

There’s also a digital download card tucked into that sleeve, and I can assure you the soulful, earbud friendly jams on Black Pumas are well worthy of living in your phone, or whatever device you listen to music on these days.

As for the wax buried inside that sleeve, this smoky translucent beauty is indeed a jaw-dropper.

Now, that Black Pumas release is a limited edition exclusive, but it’s not quite as limited as Abysskiss, of which only 1,000 copies were made. Say hello to #240.

Like the Black Pumas’ release, there’s a couple of goodies worth your attention hidden inside the sleeve of Abysskiss, including a full lyric sheet, and a digital download to boot.

Regarding the wax inside, Abysskiss is a bonafide eco-friendly pressing, having been forged from the recycled leftover bits from other vinyl pressings. As such, this limited edition is about as one-of-a-kind as a vinyl pressing can get.

Battle of the Bandbox

It’s been a while since I’ve done a proper Battle of the Bandbox, and in all honesty it sort of feels unfair to pit such distinctly different albums against each other. And unfortunately for me, as disparate as both Black Pumas and Abysskiss are in both tone and content, they’re also both breathtaking pieces of art in their own right, making this one of the more difficult battles I’ve ever judged.

But judging must be done, and I hereby bequeath Black Pumas and their body-moving marvel of modern soul Black Pumas as the winner of this month’s Battle of the Bandbox. All hails Black Pumas!! I should note, however, that their win was largely predicated on the fact that the weather is still very Summery where I am, and this is an album built for hot Summer nights. And as it is, I’m pretty confident that had this box arrived in the throws of late-Fall or early-Winter, Abysskiss likely would’ve taken the title. C’est la vie, right?

Vinyl is here to stay, friends. And if you’re one of the many who’ve found themselves fervently swept up in the madness, you’re already aware there’s a million and one ways to get your hands on some sweet, sweet wax. While I’d always encourage you to shop first at your local record store, subscription vinyl clubs really are an excellent way to help fill in/round out your growing collection.

The great thing about Bandbox is that they ultimately leave the decision-making up to you. So if you’re looking to snag a copy of your fave band’s most popular album, you can do that. Ditto for those overlooked albums chock full of tasty deep cuts. Rest assured you’ll find all those things and more in Bandbox’s Black Pumas and Adrianne Lenker releases. And if you want to hear more from either band, you can absolutely dig other vinyl treasures from each artist from the Bandbox vaults.