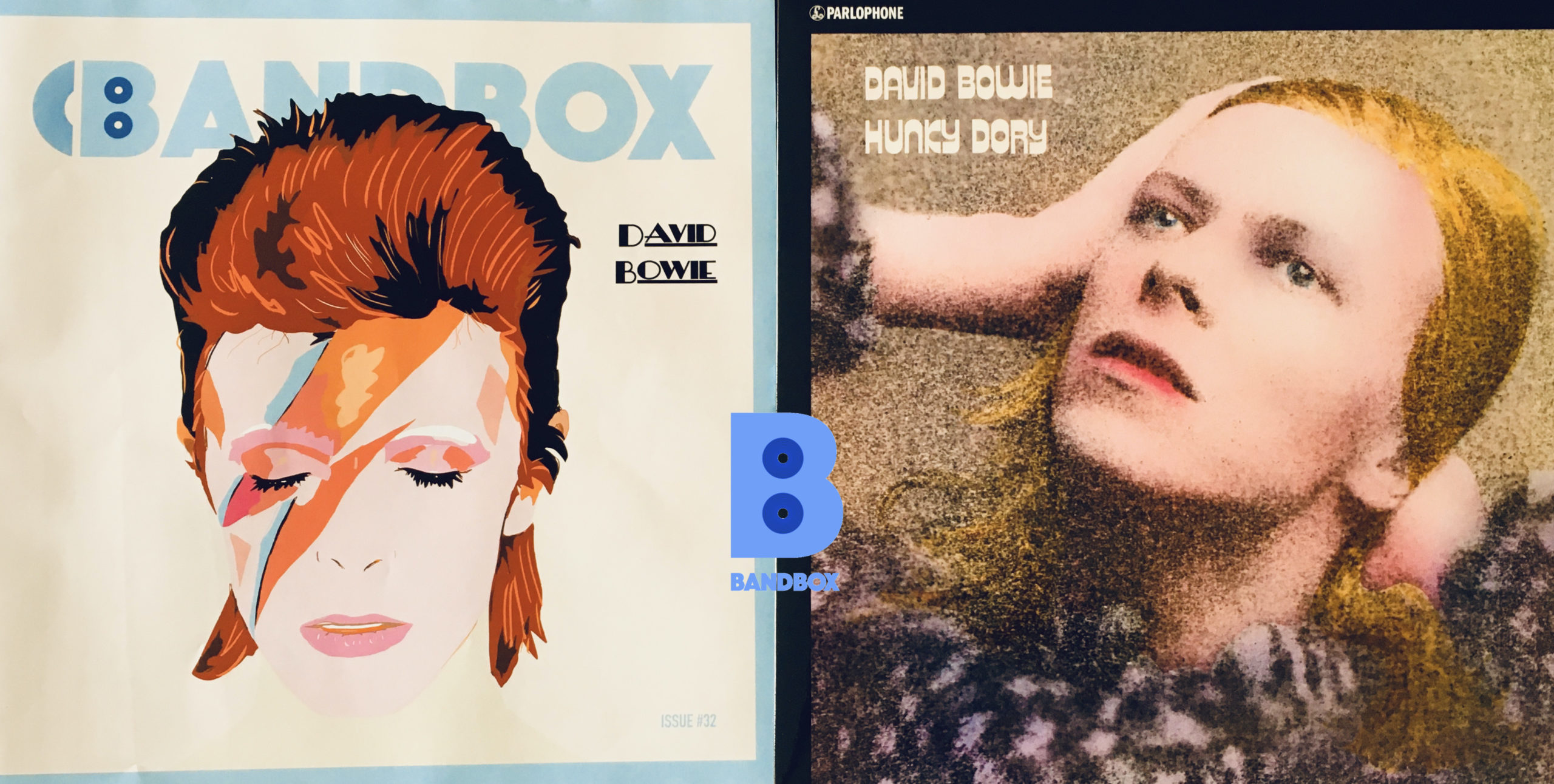 Prepare your turntable for some heavy rotation bangers vinyl fans, ’cause Bandbox record club is in town, and they’re out to bring the record store to your own front door.

If you’re wondering what the big deal with Bandbox is, the words FULLY CUSTOMIZABLE explain it all. Yep, Team Bandbox offers a tailor made vinyl experience every month by letting you fill your box with artists and albums that fit your own personal tastes. As their slogan goes, it’s pretty much like having the record store delivered to your front door every month. Bandbox is currently boasting a record store style variety of artists including  Weezer, Joy Division/New Order, Wilco, The Cure, and Mr. Tom Petty. And just so you know – they’ve got a slew of shiny exclusive color pressings currently in stock, including a stunning 15th Anniversary reissue of Death Cab For Cutie’s immortal indie rock classic Plans.

Having it your way is the key to their coveted box. With the choice of a single album from an artist you love, and a fresh edition of the “Band Dox” zine showing up every single month, Team Bandbox has effectively made it possible to do some good ole fashioned bin diving from the comfort and safety of your very own home. And you can now dig their vinyl+zine treasures for a super reasonable $29 a month.

Did I mention Bandbox even offers FREE SHIPPING? Well they do. And it’s sort of just the icing on the vinyl box cake.

What was on tap for January? How about a stone cold classic from as legit a rock & roll icon as has ever stalked the universe? Say yes to Mr. David Bowie and his glammified 1971 game-changer Hunky Dory.

Bandbox’s have it your way format and vast catalogue of albums will help ease the nerves of folks wary of the record club scene. Just so you know, you can still choose to be surprised by Team Bandbox every month if that happens to be your bag. But if you remain suspect of that whole show, Bandbox will actually let you integrate your Discogs account to ensure they never even send you something you already have in your collection.

And if you’re really, really suspect, you can pump the brakes out of your subscription at any time by pressing “pause” on your sub. It’s unlikely you’ll want to “pause” anything once you’ve signed up and experienced BandBox for yourself. Just know that your Bandbox experience will be every bit as amazing as you make it.

There are two sorts of people in the world: those who get wildly excited when they hear the name David Bowie because even Bowie at his worst is better than like 90% of the rock music out there, and those who don’t because they loathe groundbreaking music, sonic adventurism, and unflappable originality. If you’re reading this, I’ll assume you are not of the second category, and understand beyond doubt there’s no artist more worthy of the Bandbox treatment. So let’s dig right into to January’s box and have a gander at the album that essentially put Bowie on the path to, well, becoming Bowie.

Just FYI – if you want to know who did what on Hunky Dory, look a little closer at that back cover. And for heaven’s sake, take note of the contributions of one Michael Ronson (better know as Mick), as he’s easily among the most important of David Bowie’s many collaborators over the years.

Before you even tear the plastic wrap off, be sure to note that Bandbox’s Hunky Dory stock is indeed a gloriously remastered version, as are the bulk of the other Bowie albums available for selection.

You might know him better as the Starman, or Ziggy Stardust. Perhaps you prefer to call him Aladdin Sane, or The Cracked Actor, or even The Thin White Duke. His real name is David Robert Jones. But the world knows him as David Bowie. And if you know that, or any of the other names, you probably also call him a rock & roll God.

Make no mistake, if you call yourself a fan of the rock & roll, that name should be more than familiar to you as there may be no more singular or influential artist in the history of the form. Assuming the name does carry weight for you, it’s probable every spin of a Bowie album comes with just a wisp of sadness these days as the man himself charted a course for that great gig in the sky back in 2016.

If you’re anything like me, however, the pure joy of dropping the needle on literally any David Bowie album far outweighs the sadness. And that’s particularly true of the album I selected for my January Bandbox as it’s indeed the release that found Bowie essentially becoming Bowie. Still, 1971’s Hunky Dory was actually the Starman’s fourth full length after 1967’s David Bowie, 1969’s retitled Space Oddity, and 1970’s The Man Who Sold the World – all albums that found Bowie playing the part of either folky troubadour or grandstanding hard rocker.

They’d also found the man scoring a major hit with the trippy star-bound classic “Space Oddity.” And perhaps more than any single song from Bowie’s first three albums, “Space Oddity” most clearly paved the road for the shape of Bowies to come … though one could hardly ignore the guitar-slinging androgyny of “The Man Who Sold the World” as equally vital. In any case, the plural “Bowies” is both intentional and necessary as the man would spend the better part of his career changing his look, his persona, and his musical style with whip-lash regularity.

The shape-shifting shenanigans more or less began with Hunky Dory. As such, it’s no coincidence that the lead track on the album is actually titled “Changes.” Even less so that the song itself – an art pop anthem built largely around a rollicking piano riff – charted a dramatic sonic shift for Bowie, signaling that the artist himself was indeed charting a path to parts unknown. And even as “Changes” would become one of Bowie’s best known songs (and indeed the last he performed live), it was also a boldly composed manifesto for the art of re-invention that he’d strictly adhere to throughout his career.

“Changes” was as fitting an opening track for Hunky Dory as anyone could’ve conjured, setting the table for a collection of songs born of fully glamified garishness, high-style sauntering, unabashed intellectualism, and a reverie for the unexpected. There’s even a few savvy shoutouts to fellow pop culture adventurers Andy Warhol, Bob Dylan, and Lou Reed … not to mention a devilishly daffy ode to his newborn son (Moon and Source Code filmmaker Duncan Jones). And of the album’s second to last offering “Queen Bitch,” it’s the humble opinion of this narrator that it may well be the greatest rock & roll song ever recorded. Feel free to debate that thought amongst yourselves, just know that I’m not listening.

As for the rest of the songs on Hunky Dory even casual David Bowies fans likely know many by heart, so I won’t waste your time running the album down in blow by blow fashion. What I will say is that I have several Bowie albums in my collection, and this copy of Hunky Dory is the one and only re-issued/remastered offering of his I own. I’m beyond happy to report that it sounds as f***ing fabulous as any Bowie album in I’ve ever heard. And if you haven’t copped one for yourself, you could do a lot worse than indulging in this Bandboxed treat.

For the record, Bandbox is all about living up to that, “cardboard box for sharing music” definition. As the focus of each month’s box is hardcore customizability, they’ve taken the opportunity to beef up their killer Bandbox zines with more pictures, interviews, and insightful artist breakdowns. Which means readers are set to dive deeper into your chosen artist’s history than ever before.

BandBox #32 puts the life and times of The Man Who Sold the World center stage, taking a close look at the Bowie’s shape-shifting career through the prism of his iconic musical alter egos, his most genre-defying and career re-defining releases, and his numerous collaborations with other iconic artists like Queen, Iggy Pop, and my personal faves TV on the Radio. And you’d better believe there are loads of fabulous Bowie pics included, because the man didn’t take many bad ones.

Once you’ve gorged on this month’s glorious Bandbox zine, there’s still the matter of the vinyl inside that dust sleeve to tend to. But before you commence to spinning, you should have a butcher’s at the printed lyric sheet inside as well, ’cause David Bowie has long been revered as song-smith of the first oder. And yeah, Hunky Dory is very much an album you’ll want to sing along with … so long as you’re singing the right lyrics of course.

As for the wax, it’s a glossy black beauty that sounds as if it was flung to your deck directly from outer space.

The vinyl boon is here to stay, friends. And if you’re one of the many who’ve found themselves fervently swept up in the madness, you’re already aware there’s a million and one ways to get your hands on some sweet, sweet wax. While I’d always encourage you to shop first at your local record store, subscription vinyl clubs really are an excellent way to help fill in/round out your growing collection.

The great thing about Bandbox is that they ultimately leave the choices up to you. So if you’re looking to snag a copy of your fave band’s most popular album, you can do that. But if you’re looking to move beyond the hits and dig deep into said band’s back catalogue (and there are numerous other David Bowie albums to choose from, by the way), you can do that too. And if you want to get a glimpse behind the curtain of a band’s career, well, Bandbox is the vinyl subscription for you. So get on board and get spinning today!

A huge THANKS to the folks at Bandbox for sponsoring this subscription. If you like what you’ve seen here, you can head over to the Bandbox website and sign up to have a sexy new Bandbox delivered to your own front door every single month. While you’re there, feel free to check out their podcast and merch section too! And be sure to check back in February as we’ll be unboxing Bandbox’s gorgeous, exclusive pressing of Waxahatchee’s instant classic Saint Cloud!