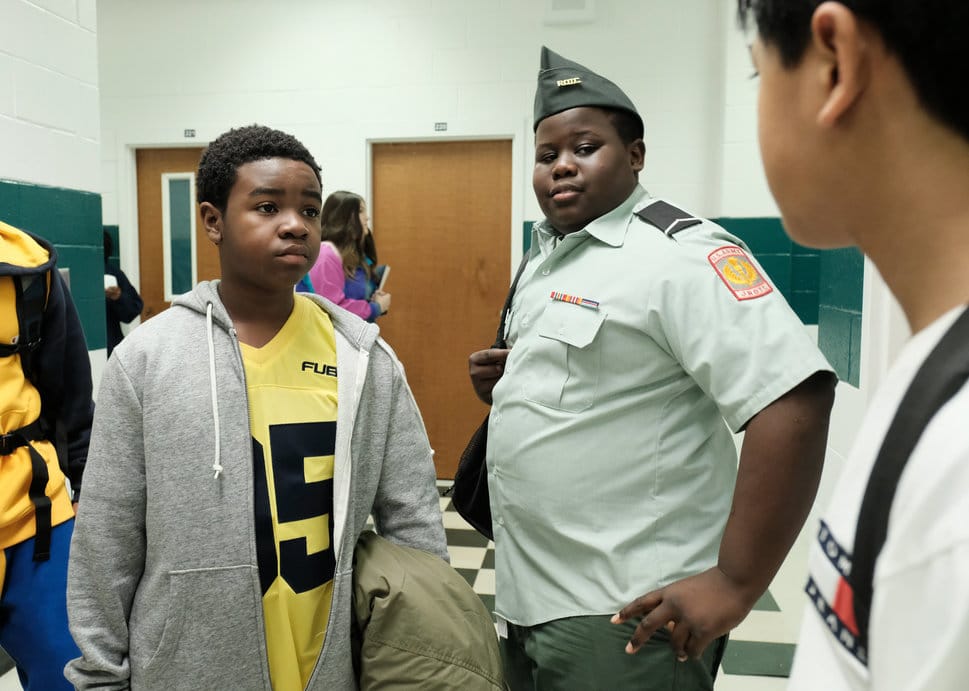 After last week’s events on Atlanta, “FUBU” throws another curve ball with a flashback episode. The writers of the show make it clear that they can wear many hats, and wear them well. From “Teddy Perkins,” to “Helen” and “Woods,” Atlanta continues its trend of genre-defying and incredibly impactful television.

In “FUBU,” we’re treated to a story from Earn’s childhood. The episode opens with young Earn (played by Alkoya Brunson) and his mother (played by Myra Lucretia Taylor) at Marshall’s. Brunson really steals your heart; he strongly resembles Earn, in look and voice, and he’s clever and compelling. Mom admires vases while Earn finds his way to a clothing rack. A bright yellow FUBU brand jersey t-shirt immediately catches his eye. Earn’s excitement grows deeper once his mother agrees to purchase it for him.

Anxious to wear the jersey to school the next day, we see Earn lying awake in bed next to an Outkast Aquemini poster. Once he hops on the bus, proud, he starts talking to a friend who compliments his shirt. Another child throws a yogurt cup out the bus window, only for it to fly into another kid’s face. This results in the yogurt-splattered kid smacking the one who threw it, obviously putting misplaced aggression towards a kid who made a mistake.  You can’t help but imagine that Earn could have been the victim of that yogurt. It’s a precursor to how the day will go. “FUBU” really captures the essence of being in middle school.

Earn arrives at school, receiving more adoration from his classmates on his wardrobe. Another student, Devin, shows up wearing the same shirt as Earn, with a few flourishes that Earn’s shirt lacks. So begins the torturous day of accusations and hopes to avoid exposure. Even so, it doesn’t matter. Earn’s proud of his shirt, and is willing to stick up for it. Everyone’s been there. I used to be so proud when I wore a new hoodie to school, or got a new pair of shoes. It means something as a kid. It means attention, notoriety, the essence of “cool.” Quickly, though, that sense of security can turn to terror.

Next, we find a young Alfred (played by Abraham Clinkscales) in the principal’s office being accused of stealing another student’s calculator. The principal asks Al why he thinks he’s in his office. “Racism,” Alfred responds, “not everyone’s going to like me.” Al was apparently just as smooth as a kid because he manages to trick the principal into letting him go. The young man playing Al this episode deserves continued attention. He was expertly cast, and carries the same charisma Brian Tyree Henry has in Alfred’s adult form. Plus, there’s something amazing about seeing young Paper Boi wearing a green ROTC uniform. More importantly, we’ll see the roots of Al’s loyalty to Earn.

Obviously upset that his legitimacy is being questioned, Earn continues to biology class.  While determining the difference in animal and plant cells, Earn passes notes with some girls in his class. They ask if he likes one of them, to which he responds yes, only to be met with the accusation that the girl who likes him doesn’t mess with dudes who wear fake shirts. After his lab partner tells him he has a loose shirt thread, Earn fiddles with it. A slight tear goes down under the armpit. Devin, from across the class, has been watching Earn and gives a smug glance.

Donning a gray hoodie to appear less visible, two older students quickly spot Earn. They tease him, saying Earn’s “got on FEBE.” Stoic, calm, but clearly upset, Earn continues to the lunchroom. Talk of the “FEBE” debacle has spanned across the entire school.

I Just Want to Be Cool

While in the lunch line, it appears even the kitchen staff are privy to the knowledge of the school-wide debate on shirt legitimacy. This seems a little out of touch, but then again, those kinds of surreal moments lend themselves to the overall feeling of Atlanta. Typically the kitchen staff is much more disengaged with student life. Plus, the middle school experience exists in a separate space. It’s a tumultuous and trying time for children.  They’re growing in tremendous ways, and constantly vying to be cool while avoiding criticism at all costs.

While Al goes through lockers in the hallway, Earn finds him to talk. Al asks Earn if he saw Dragon Ball Z last night. He replies, “Nah my mom won’t let me watch it anymore. Saw the black guy with the red lips and now she says it’s racist.” He urges Al to help him. “It’s my shirt. Somebody has the same one on and now everybody’s saying one of us has a fake.”  Al replies, “Oh snap man, that’s you? What are you doing?” To which Earn replies,”Nothing, man. I was just trying to be cool.” Earn doesn’t want to get beat up for his clothes. Al tells him, “Don’t be acting nervous. People try to come at you, just deny it. Confidence is key.” Wise words from Alfred, a young sage.

Rushing out of the classroom after the bell chimes, the sound of kids talking and joking grows louder as a classmate pulls Earn aside. Johnny, a claimed clothing wizard who can tell what’s fake, says that Earn’s shirt was made in Bangladesh, and says the real ones are made in China. Al swoops in to check his work. “Hold up, let me see.” Al checks Devin’s tags, and then Earn’s. Setting a double standard in callback to his remarks in the principal’s office, Al says to Johnny, “of course this fool gonna say ‘made in China.’ He is Chinese.” Earn’s shirt is determined to be the real FUBU.

Cool Clothing Comes at a Cost

As The Pharcyde’s “Passin’ Me By” plays, a student’s voice lists off upcoming school events over the intercom. Among the student chatter, the principal asks the classroom to settle down as he has news to share. Devin committed suicide the night before. One student chuckles at the news. Devin’s parents separated recently and he didn’t take it well. The teacher takes it upon herself to console the class but moves on. Denisha, a troubled student from earlier in the episode, arrives rejuvenated and sits in Devin’s chair. Perhaps with loss we can only hope to gain a little more momentum in life. It goes to show how children compartmentalize and deal with death, but also how fleeting it is.

Back home, Earn’s mother and Aunt Lorraine await him. Al lounges on the sofa. Mrs. Marks and Lorraine heard about their classmate Devin dying. “You better say something if somebody tries harassing you,” Mrs. Marks comments. Lorraine adds, “people will bully you your whole life if you let ’em. You got to stand up for yourself.” This string of advice leads to talk about Earn’s appearances. “Your clothes are important,” Earn’s mom says. She really wants him to make a good impression for his upcoming piano lessons. Not only that, but appearances are crucial for black men in America. For one step that a white man takes, a black man has to take two.

Mrs. Marks remarks to Earn, “you and your cousin got to look out for each other.” To which we can make claim that “FUBU” as a whole was an excellent followup to Earn and Al’s conversation about management in last week’s “North of the Border.” Al was willing to step up and help Earn out, because they’re family and he’s loyal to that. Even if it now means that they, in an act of random terror that only Robbin’ Season could bring, carry the burden of a young man’s suicide at their feet. All in pursuit of trying to look fresh. Can you blame Earn for coveting FUBU? He was taught from a young age that clothing defines you.

It’s important to mention that middle school age suicides are becoming a bigger problem.  This article from 2016 states that, “in 2014, 425 young people 10 to 14 years of age died of suicide.” Teachers and school administrators ought to take a larger role in addressing the youth’s mental health. More outreach, maybe more therapy, should be made readily accessible to ALL children. This is a growing problem for people of color especially (black suicide rates have grown dramatically over the years, especially for young black men).

Men are conditioned from such an early age to bottle their emotions in order to seem “cool” or “tough.” If anything, we should be teaching the opposite. Then again, this is America.  The land of racism, mass (black) incarceration, rampant misogyny, and consistent public shooting massacres. Not too sound so bleak, but Atlanta‘s tone is indefinitely influenced by this. For if life can be robbed of us so easily, what’s a penny or two here and there? What’s a loss of a child? How much is really at stake?

Earn and Al: Where They Stand

Next week’s finale, “Crabs in a Barrel,” will hopefully answer all the questions that “North of the Border” left for us. “FUBU” provides evidence that Al repeatedly bails Earn out. The only question left is how much longer it’ll be before he leaves Earn out to dry. Earn has for far too long been a flawed person, and Al can’t spend much more time saving him. This isn’t pretend anymore. This is life and death, money and rap, family, and trust.