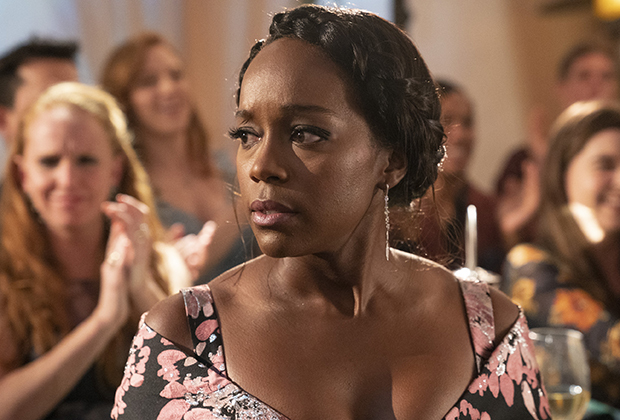 How to Get Away with Murder Season 5, Episode 3: “The Baby Was Never Dead” asks some difficult questions – is it okay to break the rules to help someone else? What about just to help yourself?

Tonight’s episode is about ethics. Contrary to public opinion, lawyers are, in general, a pretty ethical bunch. We have to be—there are a ton of rules to follow, and we can lose the ability to practice if we break them. But at what point do those rules actually get in the way of providing your client with the best possible legal representation? In the real world, that can be a tough question to answer. But it’s fun to see how the lines really blur between responsibility to the legal profession and responsibility to the client in the fictional HTGAWM universe.

After a season focused primarily on Annalise’s class action suit and taking down Jorge Castillo, HTGAWM has essentially hit the reset button this season, going back to a case-of-the-week format and returning Annalise to the classroom. But it doesn’t feel like we’re just rehashing old material. For one thing, the characters have grown (or at least developed) enough that, while they may be in familiar situations, they’re experiencing and reacting to them in different ways.

But another reason the original format is working is because, unlike a lot of procedurals where the cases tend follow the same tired patterns, Annalise’s clients are usually unique and interesting. Last week, she got justice for one of her class action clients, a gay Muslim woman who had pled guilty to killing her wife on the advice of her overworked public defender. This week’s client, Niles Harrington, is the polar opposite of that—a rich, brash, white male whose claim to fame (in addition to being filthy rich) is a book called The Psychopath CEO. He claims the book is tongue-in-cheek, but every time he opens his mouth, he can’t help but make himself look more and more like the psychopath he claims not to be. It’s not difficult for the jury to buy the fact that Harrington has strangled his business partner despite the hoops Annalise and Emmett Crawford jump through to create reasonable doubt.

And Annalise is more than willing to bend the rules, even for a client she despises, because Harrington will bring a ton of business to Caplan and Gold if they can keep him out of prison. And since C&G is providing Annalise with the resources she needs to help her class action clients get new trials, it’s easy for her to justify pinning a murder on an innocent secretary rather than letting the psychopath go down for it. Okay, maybe it’s not easy. But it’s for the greater good, which makes it the right call in her mind.

But what do you do when the “psychopath” turns out to have a conscience after all? Ultimately, Harrington willingly accepts the jury’s guilty verdict to protect the real killer—his wife. And since the jury seems to ignore the actual evidence (or lack thereof) that’s probably a winnable appeal. But he accepts their decision nonetheless. That’s not the behavior of someone with no regard for the feelings or well-being of others. Maybe he isn’t as bad as his book makes him appear to be. There’s a lesson in there somewhere about not judging books by their covers, but it just seems a little too on the nose.

Speaking of ethics rules, the governor appears to be using them in a very unethical way as she forces all of Annalise’s clinic students to take oral ethics exams, on short notice, in order to represent the class action defendants. It’s a thinly veiled attempt to get back at Annalise under the guise of protecting the rights of the defendants, and it’s pretty underhanded. Fortunately, all of them pass, and so the work of the clinic can continue. The ethics interviews are nicely juxtaposed with Annalise and Emmett coming up with the most unethical ways to get Harrington acquitted.

In other news, the mystery surrounding Gabriel Maddox continues to grow. Frank now has the ability to spy on Gabriel’s computer as well as his apartment, and he finds a wad of cash and an Illinois driver’s license with Gabriel’s picture and the name “Mark Jackson.” Meanwhile, we now know that the woman who smuggled (presumably) Gabriel out of the hospital when he was an infant was actually Bonnie’s sister. And they seem to have established that Gabriel is the baby Bonnie had as a teenager that was presumed dead. I say “seem to” because I’m still expecting some kind of plot twist where we find out that the baby’s either not Bonnie’s or it’s not Gabriel (DNA evidence notwithstanding). Maybe I’m just stubborn. But until they spell it out, I’m just not convinced.