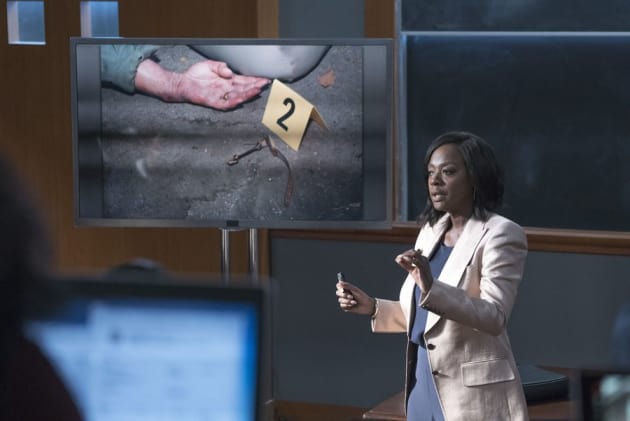 How to Get Away with Murder Season 5, Episode 2: “Whose Blood Is That?”

Annalise Keating is an incredibly talented attorney. I know if I were in fictional legal jeopardy, she’d be the first person I’d pretend to call (okay, second person—this guy would be my first choice). Granted, she doesn’t always play by the strictest ethical rules, and that can sometimes backfire. But, for the most part, she works her magic and wins for her clients.

HTGAWM appears to be back to its case-of-the-week format from previous seasons, and this week’s case is a perfect example of how Annalise can take charge in the courtroom. The clinic (with Michaela as lead counsel) takes on the case of a Muslim woman who pled guilty to the murder of her wife, presumably because her public defender advised her to do so without telling her that the decision could not be reversed later. Ultimately, Annalise gets a Perry Mason-style confession out of the victim’s son (the defendant’s stepson), who’s killed his actual mother in a mistaken attempt to kill his stepmother. And he’s done it for no reason other than the fact that his mother’s wife is a Muslim and he’s a filthy racist. So the innocent defendant goes free, the racist murderer gets put away, and everyone’s happy, right?

Well, not exactly. This is supposed to be Michaela’s case, and she actually does a really good job of breaking down the public defender who mishandled the case originally and making him look bad on the stand. Even Annalise has to give her credit for a fine performance. But once they find out that the stepson is a racist and decide to push him into a confession, Annalise manipulates Michaela into giving the case back by putting doubt in her mind about her ability to pull off the cross-examination. Ultimately, it’s the right call as Michaela probably isn’t prepared to handle something at that level, especially when their defendant’s life is on the line. But, even though everything works out, this isn’t just about the case or the defendant.

Michaela hasn’t been the same since she had Simon deported at the end of last season. It wasn’t necessary, and Annalise warned her not to do it. But she did it anyway, and it’s changed her. She’s more ruthless, she’s focused on results over relationships, and she seems willing to break whatever rules she needs to to get ahead. Sound like anyone else we know? While the change has been somewhat gradual, It’s almost as if Simon’s deportation was the final step in Michaela’s transformation into a younger version of her mentor. And Annalise sees it, and it’s probably a little frightening. For all of her apparent callousness, Annalise cares about her students, and she doesn’t want to see Michaela go down the same road she’s been down. It’s likely to end poorly for both of them. The two of them have kind of a love-hate relationship (which can probably be said of Annalise and just about every other character), so I’m curious to see how it plays out.

There’s a LOT going on in this episode, and there really isn’t space to cover it all (I’ll briefly call out a few of the minor storylines in the “random thoughts” section below). But Asher deserves a mention this week, mainly because he finally grows a pair and takes charge of his career. After Annalise cuts him from the clinic and calls him out last week, he basically decides to harass Miller into giving him a job at the district attorney’s office. It doesn’t work until Asher has the guts to tell Miller his speech for the permanent D.A.’s chair is garbage and needs to be a lot tougher. It’s another case of the student channeling the professor as Asher tells Miller exactly what Annalise would have said, and it works. It’s good to see Asher back on his feet–let’s hope he stays there.

In what’s also become a pretty significant (and somewhat confusing) storyline, Frank’s still obsessed with Gabriel Maddox. He can’t clone Gabriel’s flip phone, so he actually hooks up with the roommate and pays her to kick Gabriel out of her apartment so that Gabriel will move into the apartment across from Asher, where Frank has set up surveillance cameras. He probably doesn’t need to sleep with her for that, but he also wants to make Laurel jealous after she rejected last week’s marriage proposal. Frank may be a sociopath, but he’s a very creative one.

Nate’s also looking into Gabriel, but at this point he’s really only interested in his background and maternity. At this point, the writers want us to believe that a) he’s Bonnie’s son, b) that he was conceived when Bonnie was raped by a congressman (which is a callback to when Annalise and Bonnie first met), and c) that someone (presumably Bonnie) kidnapped Gabriel a couple of days after he was born. I’m willing to buy all of that, but I’m keeping an open mind since they still seem to be leaving at least a little bit of room for other possibilities.

Symbi-Wrote: Comics to Read if You Love Venom