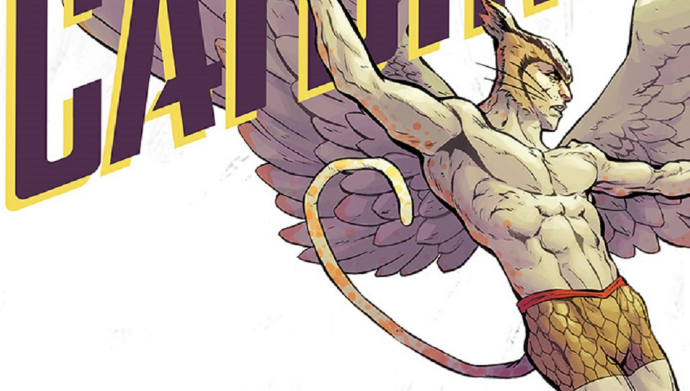 In Atwood’s fantastical world, she maps out the physical and mental development of the stories protagonist, Strig Feedelus, who develops the ability to transform himself into a unique creature made up of different cat, owl, and human parts. Along the way, Feedelus struggles between ethical, human instincts, and natural, animalistic tendencies that question his heroic abilities as a new specimen.

Although Feedelus may be a rare species who embodies both cat and owl characteristics, he is not entirely alone. In fact, he is one of many that disguise themselves as either cats or humans to safely blend in with the rest of the world, including Feedelus’ potential love interest who manifests her own cat woman-like persona.

However, like any superhero comic, Atwood made sure to include that one rotten apple looking to dominate the comic world one half-cat, half-human at a time. Angel Catbird‘s villainous antagonist also displays transformative powers to become a slightly different animal, along with a catastrophic vision to take over the world.

Anticipating a mixed response from her readers who often expect the very ‘literary’ Atwood, the 76-year-old explains  that her interest in comic books began at a very youthful age when she was immersed in an era where comics were returning as mainstream entertainment.

“I was born in 1939, and was thus of a reading age when the war ended and colour comics made a booming comeback. Not only did I read masses of comics in magazine form, I could encounter many of the same characters in the weekend newspapers, which had big spreads of colour comics. Some of the comics were funny—Little Lulu, Li’l Abner, Mickey Mouse, Blondie, and so forth—but some were serious—Steve Canyon, Rip Kirby, and the unfathomable Mary Worth. And some were superheroes: Batman, Captain Marvel, Wonder Woman, Superman, Plastic Man, the Green Lantern, the Human Torch, and their ilk. Some were even aimed at improving young minds: the Classic Comics series had an educational bent…Not only did I read all of these comics, I drew comics of my own.”

From drawing flying rabbits to sketching cats with wings, Atwood finally materialized her comic vision with the help of her illustrator, Johnnie Christmas.