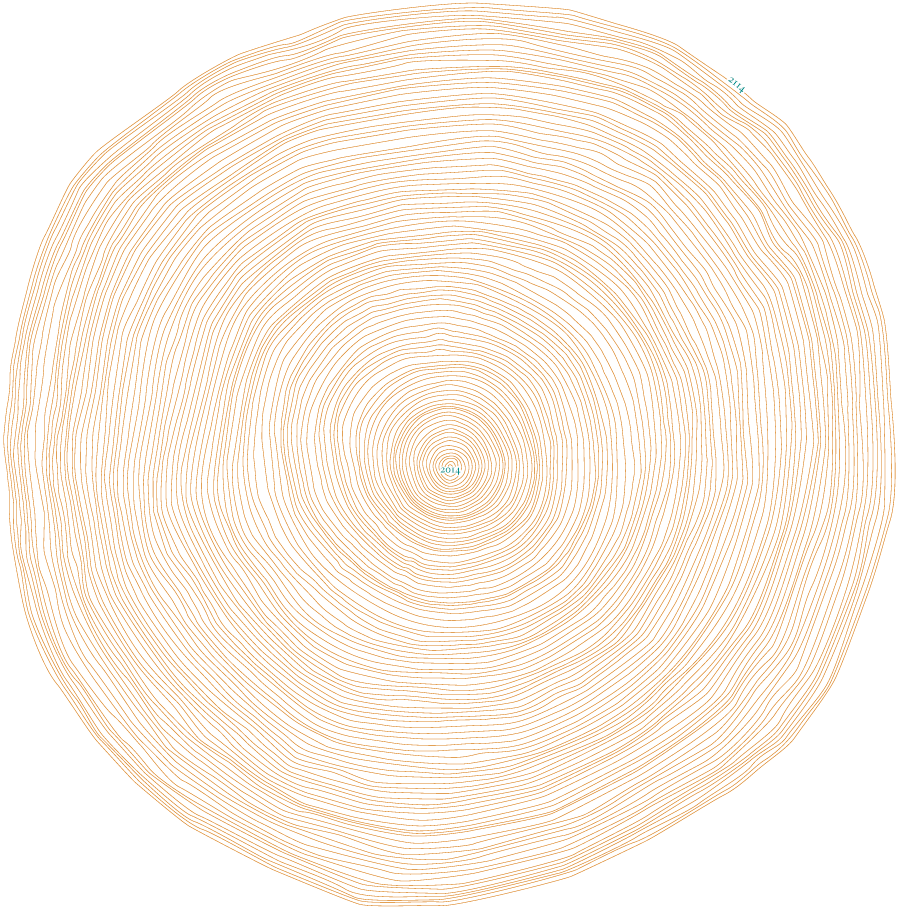 Margaret Atwood, author of The Handmaid’s Tale, The Blind Assassin, and many more, is writing a novel that will not be read for 100 years. She has agreed to be the first contributor to the Future Library Project, which will compile 100 texts from 100 different authors – and these books won’t be published until 2114.

The Future Library is an art project by Scottish artist Katie Paterson, whose previous work has focused on themes of distance, scale, and time. “Timepieces (Solar System),” for example, is a series of clocks that tell the time on other planets, and “History of Darkness” is an ongoing slide archive project which will “eventually contain hundreds upon thousands of images of darkness from different times/places in the history of the Universe, spanning billions of years.” Her latest project, the Future Library, is similarly focused on the passing of time, with the added dimension of literature.

In Nordmarka, Norway, a forest of 1,000 trees has been planted that will eventually provide the paper for a collection of novels that will be printed in 100 years. Each book will be written by a different author, who will each be invited to contribute a text between now and 2114. As the forest grows, so too will the collection of texts. The books will be held in the New Public Deichmanske Library in Oslo, along with a printing press in case printed books are obsolete in the future, to be released 100 years from now when the forest will finally be turned into paper and the books will be published for a new generation of readers. The Future Library is basically a time capsule of literature, which will ultimately depict not just an image of the past but a century’s worth of change and growth.

Margaret Atwood has agreed to be the first contributor to the project, and announced that she is “very honoured, and also happy to be part of this endeavor.” Atwood praised the optimism of the project, with its belief that humans will still be around in 100 years and will still have an interest in reading and art that will prompt them to read these time capsule texts. According to The Guardian, artist Katie Paterson is equally excited about Atwood’s involvement: “I imagine her words growing through the trees, an unseen energy, activated and materialised, the tree rings becoming chapters in a book.” The rules of the art project dictate that the author cannot reveal what her book will be about, so the contents of Atwood’s latest novel are shrouded with secrecy.

It will be interesting to see which authors join Atwood in contributing to the Future Library during the project’s progression. In the meantime, Margaret Atwood is the perfect choice of author for starting off the project. Fans of her work will know that her writing often plays around with the concept of time through her nonlinear narrative techniques, and Atwood has often expressed an interest in humanity’s interaction with nature. Her poem “The Moment,” for example, debunks the idea of ownership that humans feel they possess over nature, revealing the relationship to be the other way around. The Future Library, with its expression of nature and the passing of time, is therefore a perfect receptacle for Atwood’s writing. And while the author herself will never see her book published, and neither will we, a future generation 100 years from now will finally read her sealed manuscript.