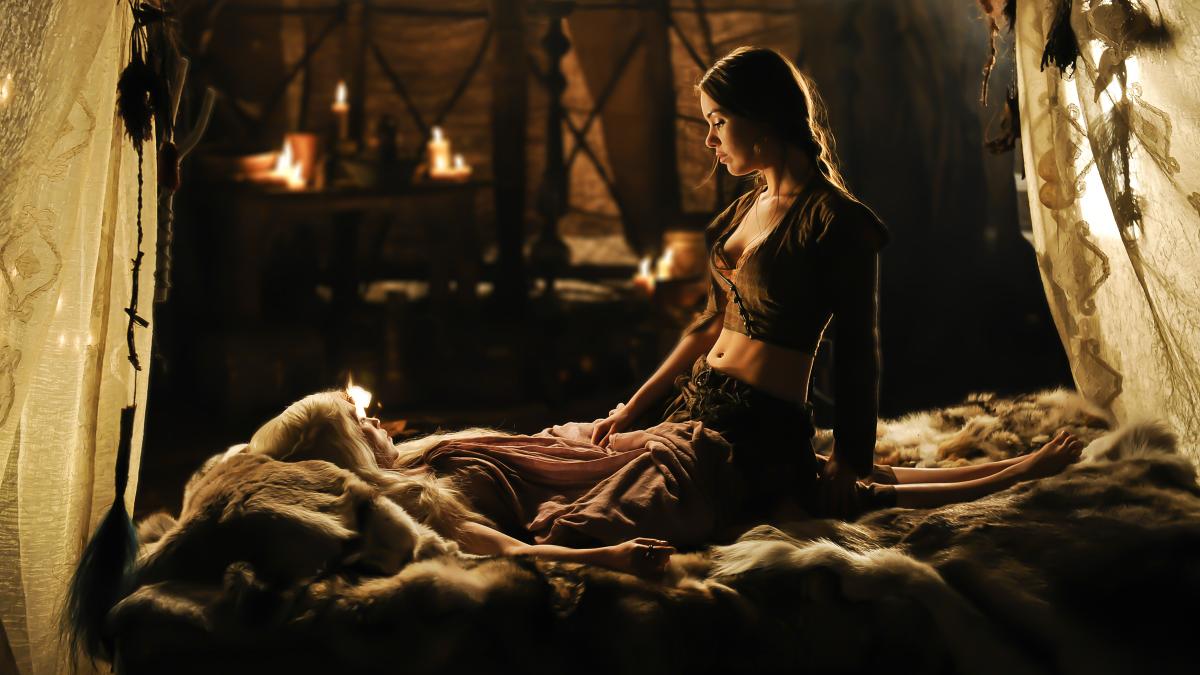 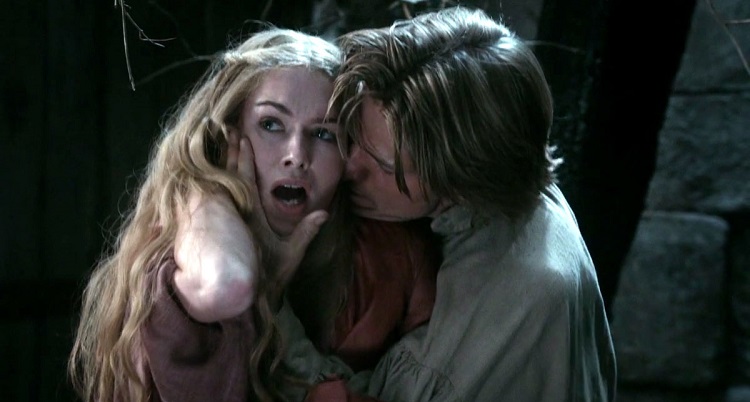 Game of Thrones isn’t just about sex and nudity. There are actual reasons for the sex scenes, and they help move the plot along. The sex is usually the backdrop for something much more serious. A secret is revealed or some plot twist occurs. Think back on when Cersei and Jamie were caught going at it. They were both fully clothed (almost), so we didn’t even see anything good, but the point of the scene was to see the twins in their incestuous union, and for Bran to become crippled. I have chosen the top 5 raunchiest moments in Game of Thrones from the seasons we have seen so far, and defended the reason for their inclusion in the show. 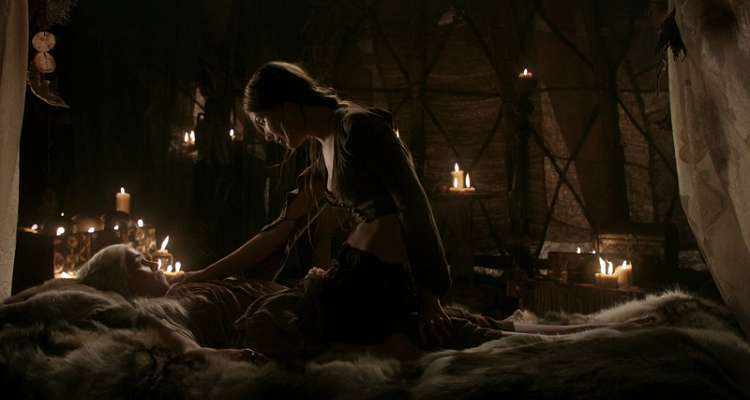 This scene, while super sexy and raunchy, was crucial to the development of Dany as a Khaleesi. She is stuck in this arranged marriage, and has to endure very disconnected, and somewhat rough, sex with a husband to whom she can barely speak. Dany is still a young girl and does what she’s told and follows orders, but then Doreah and she share an intimate talk about the role of slaves. Dany realizes she is no slave. She is a Khaleesi, and she will lead her people, starting with Khal Drogo. After Doreah shows her how to take control and ride the Khal as easily as he rides his stallion, Dany is a new woman. She takes control, and in doing so, falls deeply in love with the man she so loathed in the beginning. 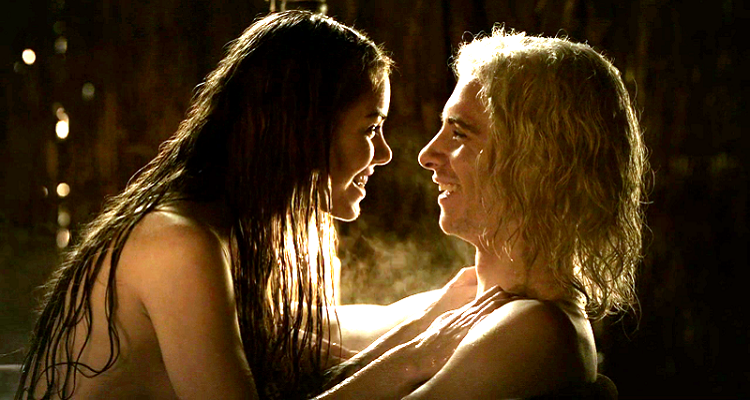 That Doreah again! I think she’s pretty sexy, no matter who she’s with. True, that was her former job at the pleasure house, but still. She’s hot stuff. I also have a bit of a thing for Viserys, in a twisted and kind of masochistic way. This scene also showed a much softer side to Viserys, one we rarely get to see. While Doreah was grinding away, Viserys tells us the history of his house. We can see that yes, he does want a throne for the power and gold and all that, but he also cares about his house and the dragons and keeping the legacy alive. Doreah has to go and ruin it by reminding him the extinction of dragons is a sad story, and then he goes back to the hardened Viserys we all know and hate. 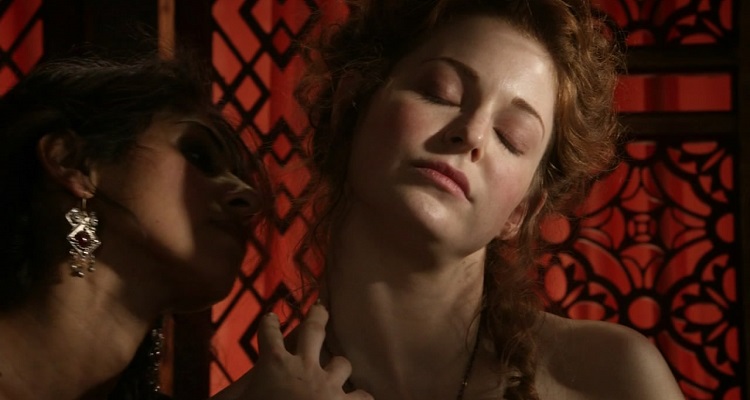 This scene is really one of the more hard-core sex scenes in the series, so far. I love it because not only are we getting super racy girl-on-girl action, but Pitar is just going on with his story about Catelyn Stark, completely unfazed by what is happening. This may seem weird, but it helps to remind us who he is, and who the girls are. He is manipulative, and sneaky, though he hides it well. He is not to be trusted, though everyone seems to think he’s on their side. The girls are just whores, they are nothing but background entertainment for lesser men. They also will never amount to anything remotely close to Cat, so Pitar isn’t interested in them at all. 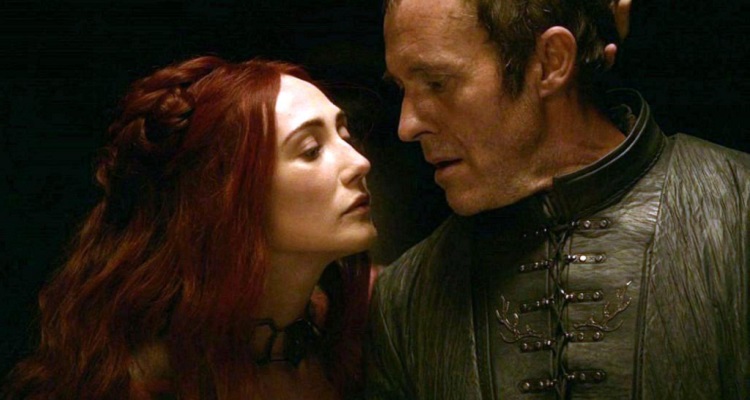 We could all see this coming (haha, literally). I don’t like Melisandre as a character in either the books or the show, but I can appreciate how easily she seduced Stannis. He really does hate his wife, and she reminds him of this fact. Along with the fact that his wife is barren, while Melisandre could give him the sons he so desperately wants. By taking her right then and there, on his map of the battlefield and current war for the Iron Throne, they sent pieces flying all about. This union did the same in the real-life situation, causing quite a ruckus in everyone’s lives. Melisandre goes on to release a shadow skeleton baby that kills Renly, which then throws everything off. Who is siding with whom? Who really killed Renly? Whose side are you on?!

Even though he took vows, we were pushing for these two to get together the whole time. And boy was it worth it. Ygritte with her harsh attitude, practically forcing Jon Snow to seduce her, and Jon, still timid and unsure of himself but unable to resist a naked girl who was kissed by fire throwing herself at him. This scene is awesome on so many levels. One because it’s probably the only time Ygritte is wrong in her mantra of “You know nothing, Jon Snow.” He clearly knows what he’s doing when he drops in front of her and kisses …well…you know. Oh, to be Ygritte. Sigh. This scene is also important because Jon Snow does break his vows. We see that he actually cares for Ygritte, it’s more than him playing the part of a Wildling. The attachment he feels for her will haunt him through the rest of the series, causing him to make potentially poor decisions down the line.