4 Weirdo TV Shows Way Too Ahead of Their Time 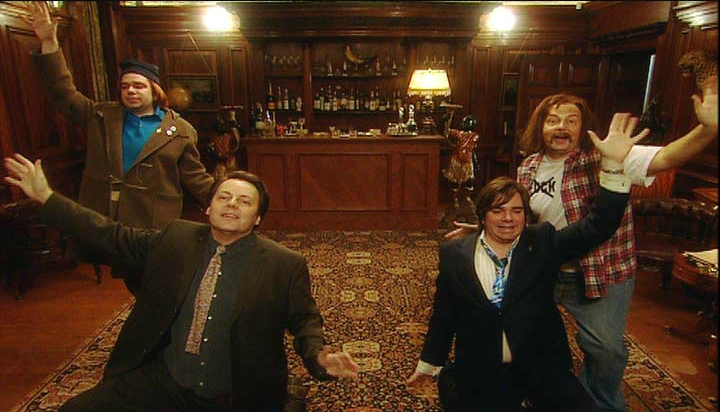 Somewhere in the back of your mind, there’s a memory of that one bizarre TV show you can’t remember the name of.

And if it’s not, one of these will satisfy your itch for a truly strange television program. All of these were so far ahead of their respective times that our heads and brains exploded and melted, resulting in the untimely cancellations and downfalls of some innovative, provocative, absurd, and downright prescient material.

Oh, have any more besides? Share in the comments!

If you don’t know this, maybe you are the person who really needs to be reading this list the most. And if you do know this, you agree a list like this is a sham without it.

For the Gen-Xers we have Chris Elliott, who plays a breathtakingly moronic man-child in a bizarro sitcom world. For Millennials who grew up with Cartoon Network we have Brian Doyle-Murray (Bill Murray’s older brother), with a recognizable voice that will instantly trigger a hazy nostalgia. And then of course we have writers Adam Resnick (Death to Smoochy much?) and David Mirkin.

Even though it’s live-action, I’m tempted to classify it as a cartoon. Aliens spew pus that tastes scrumptious. Chris Elliott’s protagonist character frequently dies. Often at the hands of people who hate him. All set to a studio audience laugh track. It was an anti-sitcom in a sitcom world taken to absurdist extremes.

Oh, and did I mention an REM hit single is the theme song? Sigh. Only the in the 90s…

Diversity in media is a hot-button issue right now, and believe it or not, it was about 20 years ago too. Loren Bouchard (maybe you’ve heard of Bob’s Burgers?) and production company Soup2Nuts were good at making shows that were inclusive. People of color and “non traditional” family structures were staples. And Hey Monie! fit into this mold perfectly.

Although Bouchard was not as involved as he was with Home Movies or Dr. Katz, Hey Monie! has the distinct feel any Soup2Nuts show does. They achieve this by sitting the voice actors in the same room and letting them read the script and improvise together. Instead of just recording a million takes of every line to cut and paste into an audio track, this method guides the show’s tone and feel. Angela Shelton and Frances Callier provide voices for the main characters, and they work seamlessly as the duo that propels this series through.

Unfortunately, the end of the series was taken over by new entities that ruined the voice and personal experience of the characters, and it withered and died. But you can keep this show (that would probably be hailed as innovative and fresh in 2019) alive by taking it in today! Check it out.

The humor in this mid-aughts off-beat British comedy is off-the-charts absurd, and the atmosphere at times can be incredibly dark.

Matt Berry, who is now known for shows like the IT Crowd, Disenchantment (he’s the prince-turned-pig), and the new FX show What We Do in the Shadows (ahem!), plays an executioner. His bumbling American apprentice is played by Rich Fulcher, a man who has been in basically every show that matters since the 2000’s (think Adventure Time, Rick & Morty, Regular Show, Spongebob Squarepants, Kroll Show, Bob’s Burgers, Curb Your Enthusiasm, just to name a small fraction).

About half the show chronicles their often gory adventures as the executioner characters, and the other half is a mish-mash of sketch comedy a-la Kids in the Hall or Mr. Show, with plenty of musical numbers based on the theme song to boot. While it’s pretty unique to stage a sketch comedy show within a character-driven episodic plot, what’s even stranger is that same things keep happening over and over in this little universe. If you binge this, which is the ideal way to consume Snuff Box, prepare yourself as if you’re about to do a hallucinogen. It’s that weird. Maybe that’s why it only lasted one season!

The Marvelous Misadventures of Flapjack

Is this a Spongebob Squarepants ripoff or a Regular Show prequel? It’s both, and greater than the sum of those parts for sure.

This beautifully animated Cartoon Network show came out in the late 2000’s. It takes place on a floating sea platform and stars a sunny and flamboyantly upbeat kid Flapjack, who has a maternal no-nonsense whale named Bubbie as his caretaker. Meanwhile, the irascible Captain K’Nuckles (voiced by Brian Doyle Murray, remember him from a few paragraphs ago?) is Flapjack’s shady and disreputable companion, and he often uses Flapjack to his own selfish ends.

And those ends? CANDY. This show treats the effects of candy like a mix between opioids and booze. In general, it sneaks a ton of adult humor and references in every episode, which makes it a rare cartoon that a child and an adult can laugh at at the same time for totally different reasons. And it’s immediately apparent that future programs like Adventure Time and Steven Universe gained an immense amount of inspiration from it.

While this is technically a children’s show, it’s for any age group. Everything from the grotesque closeups of characters a-la Ren & Stimpy to the superb voice acting and the nautical trope satires will please both young and old. So if you like cartoons, you will LOVE this show, guaranteed.