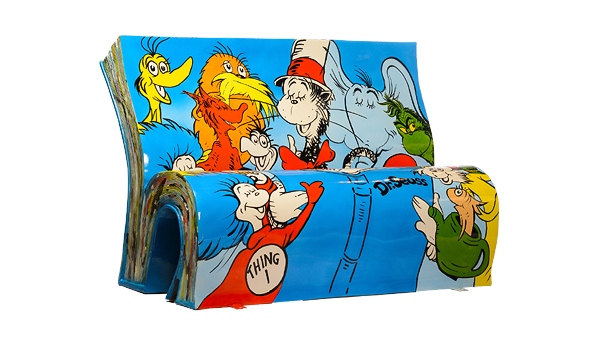 Geeks that we are, we’re not unfamiliar with the concept of scavenger hunts. Most of us have probably had our fair share of running around, looking for treasure – be it Easter eggs, golden leaves, or prized comics – with the hopes of finding them in the unlikeliest of places.

On July 2, 2014, Britain’s National Literary Trust placed (surely with the help of full-fledged ninjas) 50 beautiful benches all around London. What’s special about these benches, however, is the fact that they’re shaped like open books and covered in artworks based, or directly copied off of, famous classics that have some sort of connection to the place. The simply named ‘Books about Town‘ project exists in collaboration with Wild in Art and is supported by Visit London so that anyone who’s ever wanted to crawl into the covers of their favorite book can finally have this little dream come true. The breathtaking selection of ‘BookBench sculptures’ represents beloved books and characters, from Great Expectations, Pride and Prejudice, Mrs. Dalloway, and the James Bond stories to Mary Poppins, Paddington Bear, Dr. Suess, and The Jungle Book. They will remain in their special locations until the 15th of July after which the pieces are to be, reportedly, auctioned.

Until then, people can participate by more than merely sitting on a book and enjoying the experience. The Guardian website encourages visitors to add tidbits and photographs of their own encounters with the bookish benches, and GuardianWitness features a quiz people can take to test their knowledge of the literary illustrations. People lucky enough to be in town are doing the same, posting pictures on Facebook, Tumblr, and Twitter, and making their contacts play the guessing game.

Apart from that, there are events scheduled as part of the project where book lovers can participate in online contests, book giveaways, a Meerkat flashmob, and even attempt to break a world record by being in the biggest crowd of people dressed up as Sherlock Holmes!

Then last morning, the Guardian’s website posted a poll asking readers to vote for their favorite literary characters. The poll is open for four more days and the character that gets the most votes will be honored in the 51st bench. Whom did I vote for? Take a wild guess! (And stay tuned to see if he won.)