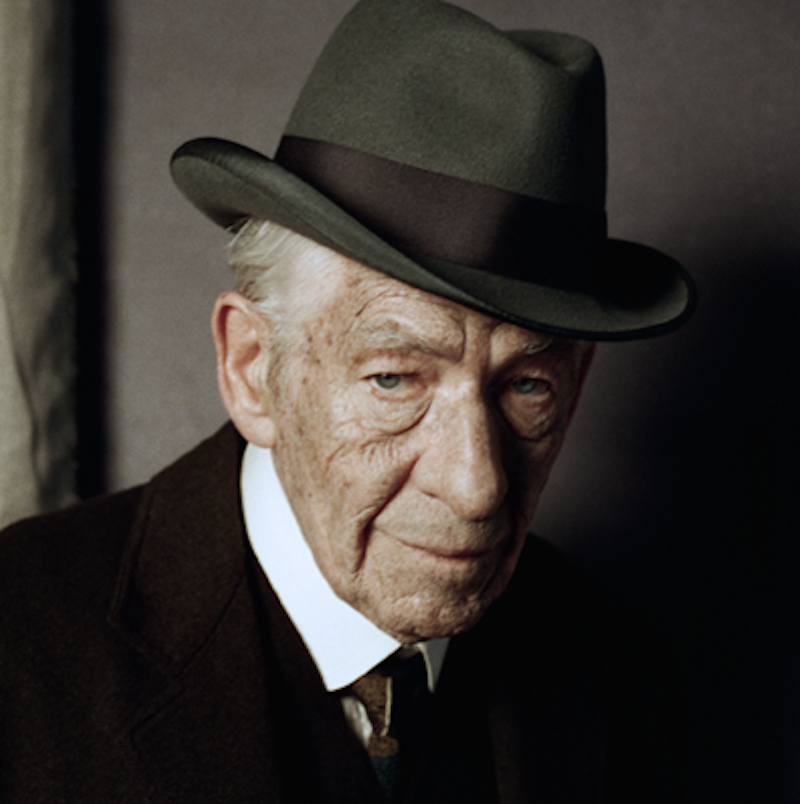 Sherlock Holmes, one of the most famous and beloved characters of all time, has been played by a great number of actors over the years. More than 70 according to Ian McKellen, the newest famous face to be added to the list. McKellen is finally taking on the role of the famous detective of Baker Street, albeit with some twists involved.

McKellen posted on his Twitter yesterday: “Over 70 actors have previously played Sherlock Holmes. Now he’s 93 years old and its my turn.” The post came with a picture of McKellen dressed as Holmes, likely for one of the film’s screen tests. The movie will be titled Mr. Holmes and is directed by Bill Condon.

In this version, Holmes has long since retired from his detective work and lives in a Sussex village, keeping bees and poring over his old case journals. His housekeeper, played by the fantastic Laura Linney, and her son also live with him. Holmes is haunted by an old case, but his memory is not at the level it once was and his brilliant mind is deteriorating with age. In this state, Holmes must try to solve a case which has gone unsolved for 50 years.

The film is not an original concept but based on a novel by American author Mitch Cullin. The book, published in May 2006, is titled A Slight Trick of The Mind, which was also the original title for Mr. Holmes. Sadly, Holmes is not accompanied by his longtime companion, Dr. John H. Watson, who has since passed away in the novel, as has Holmes’ brother Mycroft. Holmes takes an interest in teaching his housekeeper’s son the art of beekeeping and begins to tell him about the days of his prime.

McKellen is no stranger to playing noteworthy characters. While geek fans are more than familiar with his iconic turn as Gandalf in Peter Jackson’s Lord of the Rings and The Hobbit trilogies, that and X-Men’s Magneto aren’t the only legendary roles in his repertoire. He’s also played Hamlet and Richard III in film as well as enjoyed a prolific stage career. But though McKellen is no stranger to taking on literature’s most famous and infamous characters, it’s clear that the role feels special to him. While McKellen is only 75 and Holmes is supposed to be 93, he looks perfect for the part and his skills as an actor make it more than worth anticipating.

Another element of excitement attributed to the film is the chance to see director Condon team up with McKellen again, as they did for the 1998 film, Gods and Monsters. The film won Condon a Best Adapted Screenplay Oscar and saw McKellen nominated for Best Actor in a Leading Role. Perhaps this film could finally mean the Oscar that McKellen so obviously deserves.

Perhaps the concept of Holmes’ once exceptional mind being ravaged by time, as all things are, will lend a beauty and fragility to the film. In the novel, Holmes recalls his life to the son of his housekeeper. This is a possible avenue the film might take, as they have cast young actor Milo Parker in the part. Mr. Holmes’ new look at the aging detective will likely draw an audience, not to mention McKellen fans worldwide.

With two television series about the detective currently running and the third film with Robert Downey Jr. announced, Sherlock Holmes could not be more popular now. With a new generation of Holmes fans growing, it is the perfect time for McKellen to dive into the role. The cast and crew are currently filming now, and Mr. Holmes is scheduled to release in 2015.