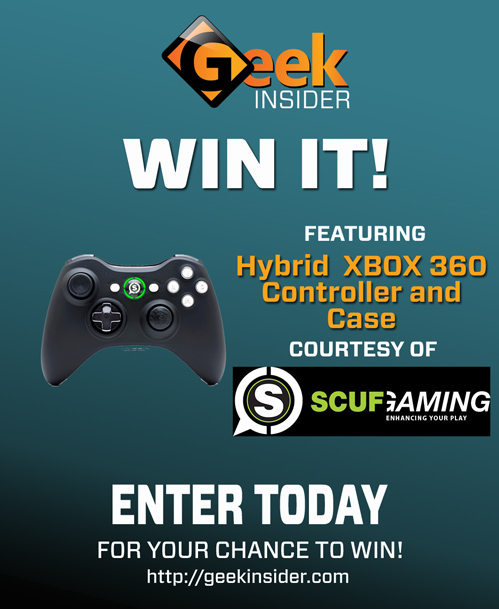 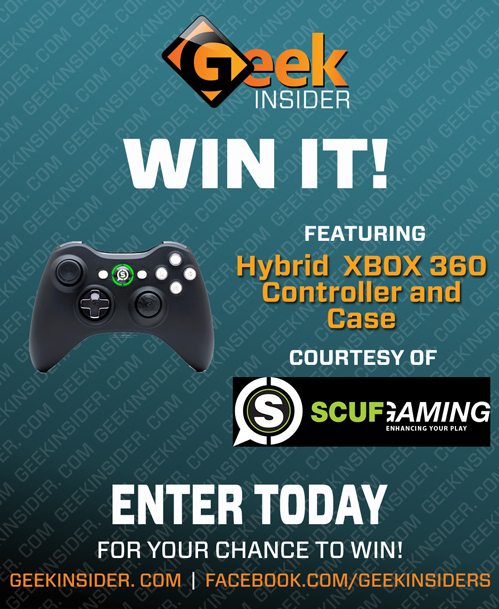 Enter now! Geek Insider is giving away one (1)  SCUF Gaming Hybrid Controller and Case to 1 lucky fan, courtesy of SCUF Gaming! Use the Rafflecopter below to enter and win. Don’t forget to ‘like’ Geek Insider on Facebook and share with your friends, as it increases your chances of winning!

Check out our review of the SCUF Gaming Hybrid Xbox 360 Controller here.

Geek Insider  reserves the right to substitute similar prizes of equal or greater value in the event the above prize is unavailable for any reason. Individual, parent, or legal guardian of the winner is solely responsible for all applicable federal, state and local taxes with respect to the grand prize.

By entering or accepting the prize in this contest, winner agrees to be bound by these Official Rules, Terms, and Conditions and to conform to all federal, state and local laws and regulations. This contest is open to all participants unless prohibited by their local state/country. For reference, the age of majority is 18 years old in the United States, with the exception of Alabama (19), Delaware (19), Mississippi (21), and Nebraska (19). The number of eligible entries received determines the odds of winning. No purchase necessary to enter or win. This contest runs from September 4th, 2013 through September 18th, 2013 at 12:00AM EST. Due to the nature of this prize, entrant must be at least 18 years of age to win.

Winner will be selected through a random drawing from all eligible entries after contest closes to win. In the event that the original winner does not meet eligibility requirements or he/she forfeits the prize, the prize may be awarded to the next randomly drawn eligible participant. All entries must be received on or before September 18th, 2013 at 12:00AM EST. The winners will be notified via e-mail or message (as applicable). Winner will have 48 hours to claim prize after initial notification. If winner fails to claim within 48 hours, an alternative winner may be selected.
Disclosures

Get Charged Up with HYBRIDS Not-So-Secret Link

Awesome giveaway, thank you!  I will be playing some Black Ops ll

I would play everything with it, not many of the big games I don’t get my hands on eventually. Coming up AC:Blackflag, Watchdogs, Arkham Origins, Fable Anniversary,  the list goes on.

Anything controller compatible on Steam, thats for sure

Awesome controller, would love this!!

All the Call of Dutys

All and every game I have and will have!

COD: Black Ops 2 or any game I find the controller useful for. 😀

i’ll be playing black ops 2 🙂 i never win these, hope i can this time ;D

Definatley titan fall if it is on the 360

ANything and everything that needs a controller of such awesomeness

Any games I can get my hands on.
Batman Arkham Origins, GTA V and of course Black ops 2

I want to try and win

Black Ops 2. Seems as though I’m the only one without one when it comes to that game.

GTA V will be at the top of my list, also Red Dead Redemption.

Call of Duty when I can

Been wanting one of these to rly see if how much of a difference they make.

i always enter these things and i never win

Any game where I can go try hard.

GTA V, shooters, ANYTHING and EVERYTHING.

Done stepps, thanks.
I wish to win! 😉

i will be playing Borderlands 2 with this

i’ll be playing everything with it! SCUF controllers look so awesome!

I would use it for Battlefield 4

I would play Battlefield

for once in my life i woould love to win something 🙁

i wanna try this Hybrid, have an original Scuf. Great controller.

Every game I own or will own!

I shall be playing some Resident Evil Revelations! Who doesn’t love to shoot zombies with an awesome controller? 😀

I will be playing blackops 2 and cod ghost when it comes out.

Skyrim and any other game I feel like playing 🙂

I HOPE I WIN I WOULD BEEN USING IT ON THE NEW COD GHOST GAME!! 🙂

Would like to try one of these out to see it they live up to their hype.

Need it for cod

I’ll be grinding on CoD with this Scuf if i win!

I would play pretty much everything; CoD, Halo, XBLA titles, etc.

I need this in my life pretty PRETTY please?

Need to brush up on my CoD skills for when CoD Ghosts comes out!  Thanks!

Saints Row IV and WWE 13 are my games of choice.

call of duty, all of them