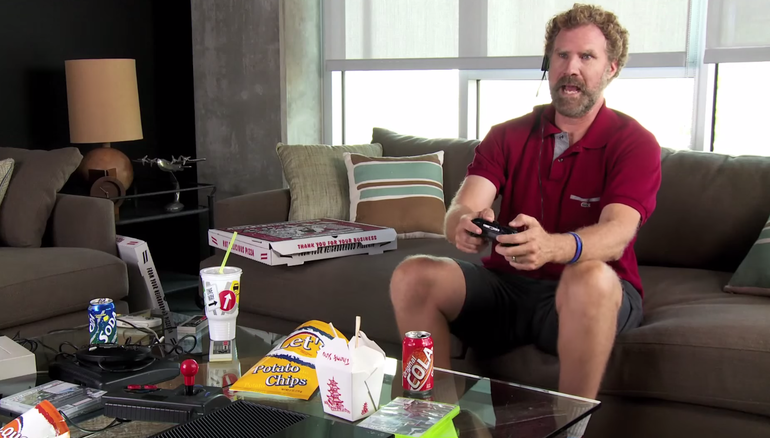 We’ve seen before how popular watching other people play video games can be. I’ve written before about the Let’s Play phenomenon and, after all, if the number 1 channel on YouTube is a gaming one, then there must be something behind the process. Clearly I’m in the wrong line of work and need to start saving up for various gaming systems, a mic, and a Hypercam 2.0.

While I’m in the process of doing that, video games have demonstrated once again that they can be an all-powerful force for good in the world if the controller is placed in the right hands.

Pictured above: the most dangerous weapons in the universe.

Playing Video Games with Will Ferrell

Famous comedian Will Ferrell (Saturday Night Life, Elf, Blades of Glory, the Anchorman movies, and more) and Twitch (the site, not a rude nickname for Peter Pettigrew) are teaming up, like an epic superhero duo, and, with the aid of their trusty video games, are setting out to defeat the evil super-villain known as Cancer.

Indiegogo has launched a fundraiser campaign aiming to raise $375,000 for Cancer for College and DonateGames.org. By donating at least $10, you’ll be entered into a virtual lottery to win a chance to play video games with Will Ferrell for 2 hours on the 26th of October.

Of course, if you’re too afraid to face Ferrell, you can donate without being entered in the sweepstakes. But all your friends will make fun of you and you’ll never be able to beat them in Super Smash Bros. again.

The only qualifications to enter and compete in this amazing opportunity are that you must be a resident of the United States, and you must be 13 or older. Seems simple enough, right? Well…yes, actually. It’s that simple. So simple a long-dead commercial advertisement meme could be resurrected to describe it in an attempt at being humorous (aren’t you glad I didn’t say ‘caveman?’)

Just in case getting a chance to play video games with a famous celebrity or contributing to the fight against super-villains isn’t enough, there are other incentives to donate. The campaign is open until the 12th of October at midnight, so there’s still almost a month to get your contributions in!

Donating $10 gets you $5 of Amazon gaming credit.

Donating $25 gets you one full month of Twitch Turbo, the $5 of gaming credit, and two entries in the sweepstakes.

Donating $50 gets you Ferrell-brand paraphernalia, from his Gamer’s Sunscreen to his “GAME FACE” SuperMegaBlastMax Event T-shirt.

Donating $150 gets you a SuperMegaBlastMax Hoodie. Best things ever. Plus everything mentioned earlier and three entries into the sweepstakes.

For the really altruistic, donating $1,500 earns you a video message from Ferrell himself, while donating $5,000 will fund a college scholarship for a cancer survivor.

As of the time of this writing, over $46,000 has been raised, and with another 26 days to go, prospects are looking high.

After all, it’s not every day you get to team up with a celebrity and fight cancer. So get your head in the game.