What Makes Unblock Me an Amazing Android Game? 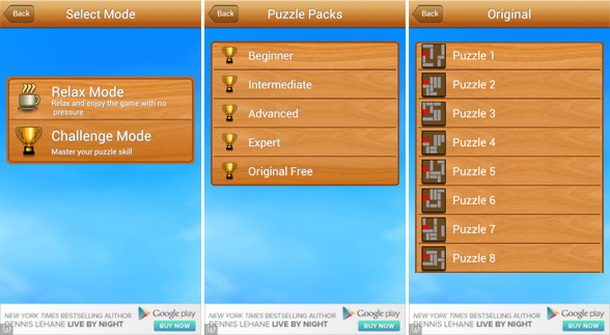 ‘Unblock Me’ is the call from a red block that demands your assistance to get out of the screen through a hole in the wall. This Android Game is enjoying huge attention in the world of gamers who enjoy puzzle solving. The red block is trapped in the array of wooden blocks (in different sizes and installed vertically as well as horizontally). To solve a puzzle, you need to bring it out by clearing the path. Like many other Android games, it may deceive you with rather simple looks, but you should be ready for a challenging and engrossing game play.

Unblock Me – the Basic Details

The game has got an average rating of 4.4 on its official Google Play Store page. The latest version of the game is 1.3.5 and it has already been installed more than a few million times. The game is free to download and the size is close to 13 MB. You need to have a phone with android version 2.1 or above to play this.

The aesthetics of Unblock Me is very likeable. You will find the graphics to be clean, soft and playful, thereby creating a relaxed atmosphere for the gamers. However, the game is not that bubbly to end up being childish.

The home menu of Unblock Me is simple to understand. The instructions are really self-explanatory and you can change the options anytime you wish to. For example, you can decide whether you want the woods to be dark or light themed. 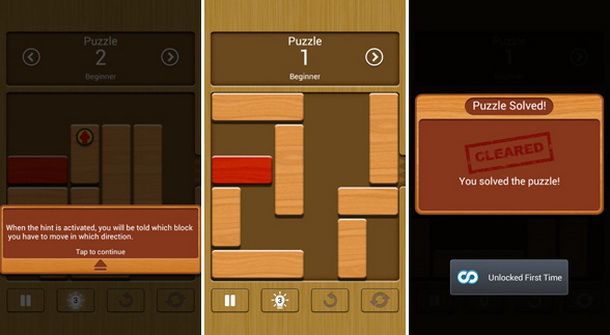 Use the touch and slide mechanism of your Android to move the blocks (horizontally positioned blocks move only left & right, whereas, the vertically positioned blocks move only up & down). Once the path for the red block clears, move it through the hole and switch to the next level. Some levels are simple enough to help the player build confidence, but the subsequent levels may test your ability to apply logic.

To begin, the game can be played in two different modes – Relax and Challenge. In the Relax mode, you can take your time and make as many moves as you want. However, you need to complete every level using a specific number of moves or less than that in the Challenge mode. Solving a puzzle in this mode will help you earn three stars.  The levels are divided into four sets according to the difficulty – Beginner, Intermediate, Advanced and Expert. Guess what! You can solve as many as 4,200 puzzles, this allows you to stay tuned to the game and never feel bored.

Interesting Options That You Will Find in Unblock Me

Unblock Me comes packed with a number of options. You can ‘Pause’ the game at any time. ‘Undo’ is another good option, in case you wish to change your previous move (I often make silly mistakes while playing a puzzle game and hence this option really made my day). The game also offers an option called ‘Hint’ in case you find yourself trapped and are not able to move further. The option will guide you about which block could be moved and in what direction. However, don’t expect the exact steps to be explained to you. You can also ‘Restart’ the game at any point of time, if you feel like being stuck and cannot really move forward through it.

You can keep a record of the solved puzzles or reset the statistics. The gaming is simple and there are not much things that you can customize (Why should you, it’s a plain game after all). I liked it for its simplicity and this is a good time pass for sure. You need to apply your brain while solving the puzzles and this stops the game from getting to the ‘boring’ zone. What do you have to share about Unblock Me?

The Future of Wireless Charging