The downfall of Google Reader is not just bad for the users of the service, but also users of some other apps that rely entirely or even partially on Google Reader. This includes apps like Flipboard, Reeder, etc., which have been affected as well. So, if you’re thinking what platform to choose if Twitter and Facebook aren’t bringing you the news you love there is a simple answer; you don’t have to worry right now because Google Reader isn’t going anywhere until July. This means apps that rely on the service will continue to work as they should, at least until then. After that there is no need to worry, because developers have promised that their apps will keep working even after Google Reader goes down.

However, if you still want an alternative to Google’s service and a simple RSS app that works across multiple platforms, then we have put together a list of 5 ideal alternatives to Google Reader. Check out the list below and switch to one of the services as soon as possible.

Feedly is available as a completely free service across multiple platforms including an extension for Safari or Chrome browser. Even though it currently relies on Google Reader, the developer has promised that when it goes down, the app will easily migrate to their own system. We hope that they deliver on their word, because Feedly is one of the best RSS apps available. It has a nice tablet friendly app layout, and the version on Web looks nice as well. It also recommends content based on what you’re reading.

People who like their content delivered in a beautiful and interactive way like a magazine, will fall in love with Flipboard. It is available for both iOS and Android platforms for Free. The app also pulls images from the content and displays them in a beautiful layout next to the headlines. It also allows users to connect to their social media accounts, and it will show you what your friends are reading.

Pulse is also a great app that has similar layout as Flipboard. It also shows your content in a magazine style but less intuitive than Flipboard’s layout. Pulse is available for free on Android, iOS and web. It takes your search criteria and crawls the web to bring you favorite content from all over the web; and even the content that you might have normally missed. You can have your feeds and content delivered to you as a Daily magazine on Pulse. 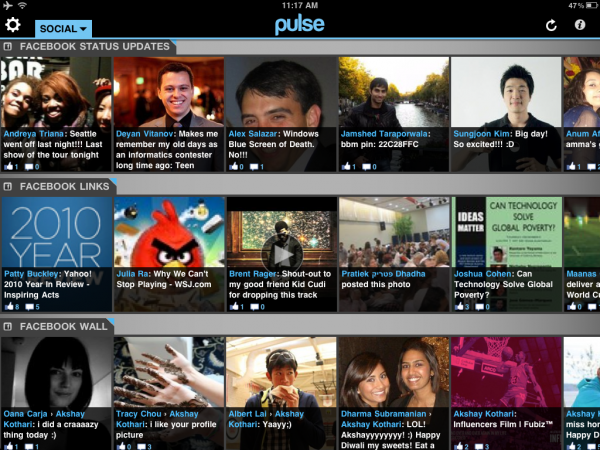 Taptu is one of my favorites. It is one of the best magazine styled reader apps out there. It is available for free on multiple mobile platforms and provides a very rich reading experience. It is much easier to manage and it also has a decent scrolling widget for Android. If you want a simple way to get your favorite news on your mobile device then Taptu is the app for you. It is also tablet friendly.

I am a big fan of free apps, but Fever is an exception as it provides the best reading experience than any other service. Fever costs $30, but it’s a must have for hard core news addicts. This app takes the popular content from your feeds and displays you stories from the most hottest (most buzzed) to cold (least shared). Well, it’s not suitable for newbies as it requires you to install and host the app on your own server. This gives users control over their feeds, and its security. Also it ensures that your app never gets sacked unlike other third party apps, which can receive the boot at any time.

All these apps are decent. There are actually numerous other alternatives to Google Reader available out there; but we’re here to bring you the best alternatives to Google’s service, which is in its last stages. If you think there are other apps that deserve a spot on the list as well, then shoot us a comment below.